From Infogalactic: the planetary knowledge core
Jump to: navigation, search
This article is about the building. For other uses, see Barn (disambiguation).
"Farm building" redirects here. Farm building may also refer to farmhouse or silo. 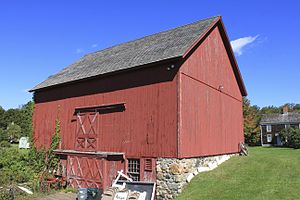 Timber framed with siding of vertical boards was typical in early New England. Red is a traditional color for paint. Connecticut. 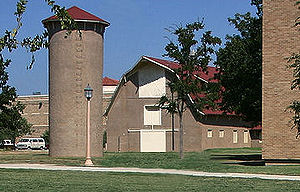 The Texas Technological College Dairy Barn in Lubbock, Texas, U.S., was used as a teaching facility until 1967. 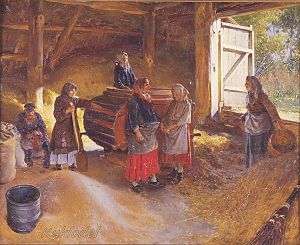 Russian women using a hand powered winnowing machine in a threshing barn. Note the board across the doorway to prevent grain from spilling out of the barn, this is the origin of the term threshold.[1] Painting from 1894 by Klavdy Lebedev titled the floor or the threshing floor (Гумно). 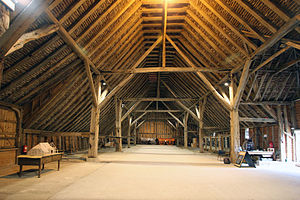 Grange Barn, Coggeshall, Colchester, England, originally part of the Cistercian monastery of Coggeshall. Dendrochronologically dated from 1237–1269, it was restored in the 1980s by the Coggeshall Grange Barn Trust, Braintree District Council and Essex County Council. 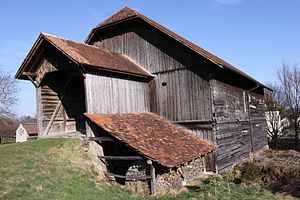 A bridge barn in Switzerland. The bridge (rather than a ramp) in this case also shelters animals.

A barn is an agricultural building primarily located on farms and used for many purposes, notably for the housing of livestock and storage of crops. In addition, barns may be used for equipment storage, as a covered workplace, and for activities such as threshing. The word barn is also used to describe buildings used for uses such as a tobacco barn or dairy barn. Byre is a word for one type of barn meant for keeping cattle.[2]

The word barn comes from the Old English bere, for barley (or grain in general), and aern, for a storage place—thus, a storehouse for barley.[3] “Another word for 'barn' in Old English was beretun, "barley enclosure" (from tun: 'enclosure,' 'house',[4] or beretun (barton), also meaning a threshing floor.[5] However, the common English name for a grain storage building now is granary. 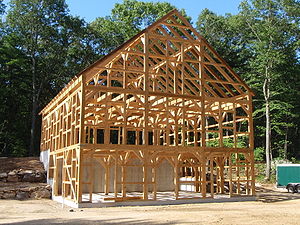 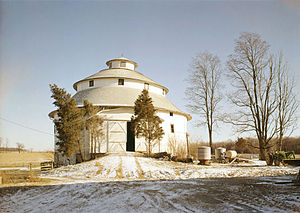 In the U.S., older barns were built from timbers hewn from trees on the farm and built as a log crib barn or timber frame, although stone barns were sometimes built in areas where stone was a cheaper building material. In the mid to late 19th century in the U.S. barn framing methods began to shift away from traditional timber framing to "truss framed" or "plank framed" buildings. Truss or plank framed barns reduced the number of timbers instead using dimensional lumber for the rafters, joists, and sometimes the trusses.[9] The joints began to become bolted or nailed instead of being mortised and tenoned. The inventor and patentee of the Jennings Barn claimed his design used less lumber, less work, less time, and less cost to build and were durable and provided more room for hay storage.[10] Mechanization on the farm, better transportation infrastructure, and new technology like a hay fork mounted on a track contributed to a need for larger, more open barns, sawmills using steam power could produce smaller pieces of lumber affordably, and machine cut nails were much less expensive than hand-made (wrought) nails. Concrete block began to be used for barns in the early 20th century in the U.S.[11]

Modern barns are more typically steel buildings. From about 1900 to 1940, many large dairy barns were built in northern USA. These commonly have gambrel or hip roofs to maximize the size of the hay loft above the dairy roof, and have become associated in the popular image of a dairy farm. The barns that were common to the wheatbelt held large numbers of pulling horses such as Clydesdales or Percherons. These large wooden barns, especially when filled with hay, could make spectacular fires that were usually total losses for the farmers. With the advent of balers it became possible to store hay and straw outdoors in stacks surrounded by a plowed fireguard. Many barns in the northern United States are painted barn red with a white trim. One possible reason for this is that ferric oxide, which is used to create red paint, was the cheapest and most readily available chemical for farmers in New England and nearby areas. Another possible reason is that ferric oxide acts a preservative[12] and so painting a barn with it would help to protect the structure.

With the popularity of tractors following World War II many barns were taken down or replaced with modern Quonset huts made of plywood or galvanized steel. Beef ranches and dairies began building smaller loftless barns often of Quonset huts or of steel walls on a treated wood frame (old telephone or power poles). By the 1960s it was found that cattle receive sufficient shelter from trees or wind fences (usually wooden slabs 20% open). 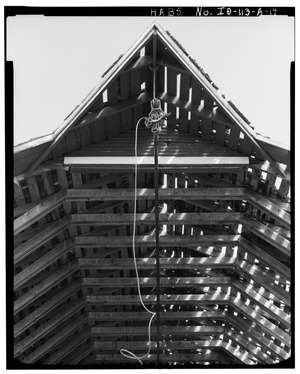 The hay track developed in the early 19th century, here showing how the hay hood (roof extension) covers the track. The gable wall of this barn is missing.

In older style barns, the upper area was used to store hay and sometimes grain. This is called the mow (rhymes with cow) or the hayloft. A large door at the top of the ends of the barn could be opened up so that hay could be put in the loft. The hay was hoisted into the barn by a system containing pulleys and a trolley that ran along a track attached to the top ridge of the barn. Trap doors in the floor allowed animal feed to be dropped into the mangers for the animals.

In New England it is common to find barns attached to the main farmhouse (connected farm architecture), allowing for chores to be done while sheltering the worker from the weather.

In the middle of the twentieth century the large broad roof of barns were sometimes painted with slogans in the United States. Most common of these were the 900 barns painted with ads for Rock City.

In the past barns were often used for communal gatherings, such as barn dances.

A barn in southern Ontario, Canada 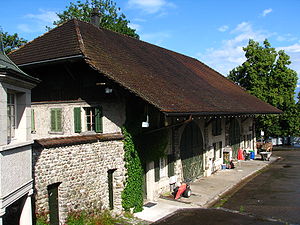 A barn of the Uster castle in the city of Uster, Switzerland 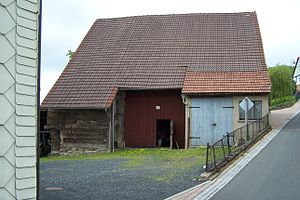 This barn in Thuringia, Germany has two outshots forming the recess to the middle barn doors.

The physics term "barn", which is a subatomic unit of area, 10−28 m2, came from experiments with uranium nuclei during World War II, wherein they were described colloquially as "big as a barn", with the measurement officially adopted to maintain security around nuclear weapons research.

Barns have been classified by their function, structure, location, or other features. Sometimes the same building falls into multiple categories.

Barns and silo in Newmarket, Ontario, Canada. These structures were torn down in March 2009. 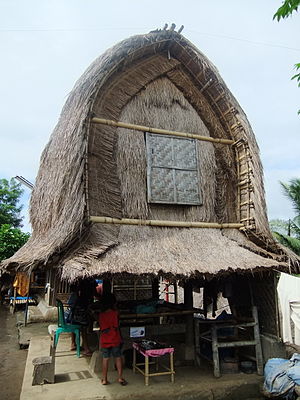 In Germany some hay barns were kept away from urban areas due to the risk of fire. These areas are called a Scheunenviertel from the German name for a barn, Scheune, which translates as "barn quarter".[15] This barn quarter is in Steinhude, Germany 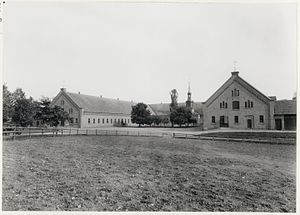 The barn at Bjärka-Säby Castle, Sweden, around 1909.

Old farm buildings of the countryside contribute to the landscape, and help define the history of the location, i.e. how farming took place in the past, and how the area has been settled throughout the ages. They also can show the agricultural methods, building materials, and skills that were used. Most were built with materials reflecting the local geology of the area. Building methods include earth walling and thatching.

Buildings in stone and brick, roofed with tile or slate, increasingly replaced buildings in clay, timber and thatch from the later 18th century. Metal roofs started to be used from the 1850s. The arrival of canals and railways brought about transportation of building materials over greater distances.

Clues determining their age and historical use can be found from old maps, sale documents, estate plans, and from a visual inspection of the building itself,noting (for example) reused timbers, former floors, partitions, doors and windows.

The arrangement of the buildings within the farmstead can also yield valuable information on the historical farm usage and landscape value. Linear farmsteads were typical of small farms, where there was an advantage to having cattle and fodder within one building, due to the colder climate. Dispersed clusters of unplanned groups were more widespread. Loose courtyard plans built around a yard were associated with bigger farms, whereas carefully laid out courtyard plans designed to minimize waste and labour were built in the latter part of the 18th century.[16][17]

The barns are typically the oldest and biggest buildings to be found on the farm. Many barns were converted into cow houses and fodder processing and storage buildings after the 1880s. Many barns had owl holes to allow for access by barn owls, encouraged to aid vermin control.

The stable is typically the second-oldest building type on the farm. They were well built and placed near the house due to the value that the horses had as draught animals

Modern granaries were built from the 18th century. Complete granary interiors, with plastered walls and wooden partitioning to grain bins, are very rare.

Longhouses are an ancient building where people and animals used the same entrance. These can still be seen, for example, in North Germany, where the Low Saxon house occurs.

Few interiors of the 19th century cow houses have survived unaltered due to dairy-hygiene regulations in many countries.

Old farm buildings may show the following signs of deterioration: rotting in timber-framed constructions due to damp, cracks in the masonry from movement of the walls, e.g. ground movement, roofing problems (e.g. outward thrust of it, deterioration of purlins and gable ends), foundation problems, penetration of tree roots; lime mortar being washed away due to inadequate weather-protection. Walls made of cob, earth mortars or walls with rubble cores are all highly vulnerable to water penetration, and replacement or covering of breathable materials with cement or damp-proofing materials may trap moisture within the walls.[18][19]

In England and Wales some of these historical buildings have been given "listed building" status, which provides them some degree of archaeological protection.