The first creation was in 1675 for Charles FitzCharles, illegitimate son of King Charles II by his mistress Catherine Pegge. He died without heirs in 1680, when the title became extinct.

The second creation came in 1682 in favour of Thomas Hickman-Windsor, 7th Baron Windsor. The Windsor family descends from Sir Andrew Windsor, who notably fought at the Battle of the Spurs in 1513, where he was knighted. In 1529 he was summoned to Parliament as Baron Windsor, of Stanwell in the County of Buckingham. His grandson, Edward, the third Baron, fought at the Battle of St Quentin in 1557. Edward's elder son Frederick, the fourth Baron, died unmarried at an early age and was succeeded by his younger brother, Henry, the fifth Baron. The latter's son, Thomas, the sixth Baron, was a Rear-Admiral in the Royal Navy. On Thomas's death in 1641 the barony fell into abeyance between his sisters.

On the death of fourth Earl's childless grandson, Other, the sixth Earl, in 1833, the barony and earldom separated. The barony fell into abeyance between his sisters Lady Maria Windsor, wife of Arthur Hill, 3rd Marquess of Downshire, and Lady Harriet Windsor, wife of the Honourable Robert Clive, second son of Edward Clive, 1st Earl of Powis (see below for further history of the barony and Earl of Powis for earlier history of the Clive family). The sixth Earl was succeeded in the earldom by his uncle, Andrew, the seventh Earl. The seventh Earl died unmarried and was succeeded by his younger brother, Henry, the eighth Earl. The eighth Earl was childless and on his death in 1843 the earldom became extinct. The barony of Windsor remained in abeyance until 1855 when the abeyance was terminated in favour of the aforementioned younger sister Lady Harriet Windsor, who became the thirteenth Baroness. The same year she assumed by Royal license the additional surname of Windsor. Her eldest son the Honourable Robert predeceased her and she was succeeded by her grandson, Robert, the fourteenth Baron, who was a prominent Conservative politician and held office as Paymaster-General and First Commissioner of Works.

In 1905 the earldom of Plymouth was revived in the third creation when Robert was created Viscount Windsor, of St Fagans in the County of Glamorgan, and Earl of Plymouth, in the County of Devon. These titles were in the Peerage of the United Kingdom. The first Earl was succeeded by his second and only surviving son, Ivor, the second Earl, who was also a Conservative politician and served as Captain of the Honourable Corps of Gentlemen-at-Arms, Under-Secretary of State for Dominion Affairs, Under-Secretary of State for the Colonies and Under-Secretary of State for Foreign Affairs. As of 2013[update] the titles are held by Ivan's eldest son, the Other. third Earl, who succeeded in 1943. As a male-line descendant of the first Earl of Powis he is also in remainder to this peerage and its subsidiary titles. 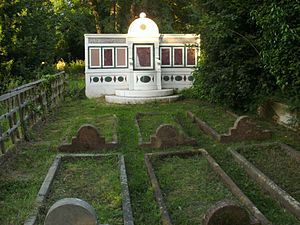 Windsor-Clive family plot in the cemetery of St Bartholomew's church, Tardebigge, Worcestershire. Robert, 1st Earl of Plymouth (1857–1923) and his family are buried here.

Another member of the Windsor family was the Honourable Thomas Windsor, younger son of Thomas Hickman-Windsor, 1st Earl of Plymouth, who was created Viscount Windsor in 1699. This title became extinct on the death of his son, the second Viscount, in 1758. The second Viscount's daughter and heiress, the Honourable Charlotte Jane Windsor, married John Stuart, 4th Earl of Bute. In 1796 the Windsor title was revived when Lord Bute was made Earl of Windsor and Marquess of Bute.

The family seat was Hewell Grange, Worcestershire, and is now Oakly Park, Bromfield near Ludlow, Shropshire.

The unusual forename 'Other' is traditional in the family and derives from a legendary Saxon ancestor 'Otho' or 'Othere'.