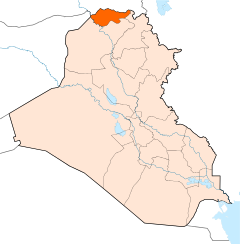 Barwar is located in Northern Iraq.

Barwar (Syriac: ܒܪܘܪ‎) also known as Barwari and Barwari Bala, is a region situated in northern Dohuk Governorate in Iraq. The region is populated by Kurds and Assyrians.

The mountainous region was part of the diocese of Beth Nuhadra (current day Dohuk) since antiquities and have seen a mass migration of Nestorians after the fall of Baghdad in 1258 and Timurlane's invasion from central Iraq.[1]

Its Christian inhabitants were little affected by the Ottoman conquests, however starting from the 19th century Kurdish Emirs sought to expand their territories at their expense. In the 1830s Muhammad Rawanduzi, the Emir of Soran, tried to forcibly add the region to his dominion pillaging many Assyrian villages. Bedr Khan Beg of Bohtan renewed attacks on the region in the 1840s, killing tens of thousands of Assyrians in Barwari and Hakkari before being ultimately defeated by the Ottomans.[2]

Many Assyrians who survived later suffered in the Assyrian Genocide by the Ottoman Army and their Kurdish allies during the First World War; others took refuge in Urmia led by their patriarch, Mar Shimun XXI Benyamin.[3] Later attempts for their resettlement in Barwar were largely unsuccessful.[4]

All of the Barwari Jews left for Israel shortly after its independence. The region was heavily affected by the Kurdish uprisings during the 1950s and 60s and was largely depopulated during the Anfal campaign in the 1980s.