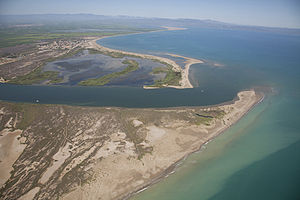 Base level is also significant for subsurface drainage. A low base level is a prerequisite for the formation of karst topography, a network of sinkholes and caverns that can develop as slightly acidic groundwater enlarges joints (by solution) in limestone rock. Often this network of underground drainage feeds back to surface drainage along the edges of larger rivers, which are the effective base level.

When the source of a stream is very high relative to its base level (high stream gradient), erosion proceeds rapidly due to the energy of the rapidly moving water and the topography becomes rugged, and it is considered a young stream (geologically speaking). When erosion has acted for a long geologic time, wearing down the high points and making a small difference between the source and the base level of a stream (low stream gradient), then the stream is called mature. Mature stream valleys have gentle slopes, rounded higher points and meandering courses.

Movements of land can greatly affect base levels. As an illustration, the uplift of the Colorado Plateau, combined with the opening of the Gulf of California to the sea, established sea level as the base level for the Colorado River and led to the (geologically) rapid erosion that resulted in the Grand Canyon.

The many meanders of the Kentucky River show that it was a mature stream with little relief. Uplift of the central Kentucky area rejuvenated the stream, causing it to cut a deep canyon, but preserving the meanders that indicate the stream existed prior to the uplift.

Other geologic processes can affect base levels. In the Finger Lakes of New York, Ice age glaciation greatly deepened the lake valleys and rejuvenated tributary streams. These streams have deep ravines and often waterfalls where hard rock layers slow erosion; they are said to be hanging valleys.

Sea level can also change (primarily due to the formation or melting of continental ice sheets), and raise or lower the final base level for coastal rivers. Along the east coast of North America, river valleys extend out onto the continental shelf, indicating a time when erosion was possible due to the lower base level of a lower sea level in the past. Today many of these same rivers end in bays, indicating that sea level has risen in recent geologic time. This is referred to as a drowned coastline.