From Infogalactic: the planetary knowledge core
(Redirected from Batkivshchyna)
Jump to: navigation, search

The organization was founded in 1995 as the All-Ukrainian Fatherland Union of Peaceful Forces Citizen Association by Volodymyr Prisnyakov, a rector at Dnipropetrovsk National University.[16] In 1998, Tymoshenko was elected a deputy of the Supreme Council of Bobrynets constituency number 99 Kirovohrad Oblast. In spring 1999, Tymoshenko's parliamentary group created the "Fatherland" as a breakaway group of Hromada.[32] On 14 September 1998 the General Prosecutor of Ukraine had accused Hromada leader Pavlo Lazarenko of embezzlement, and Tymoshenko established the "Fatherland" parliamentary group the following March.[33][15] Political party "All-Ukrainian Union" Fatherland""based on the founding congress July 9, 1999.[16] The first party chairman elected was Viktor Drachenko, a former Communist Party secretary from Dnipropetrovsk Oblast.[16] The party was registered at the Ministry of Justice of Ukraine on 16 September 1999, certificate № 122.[34] At the second congress, held on 18 December of the same year was elected Chairman of the party Yulia Tymoshenko.[16]

In the 2002 parliamentary elections, the party was the main constituent of the Yulia Tymoshenko Bloc.[34] The bloc obtained 22 seats in the parliament, all on the party list. Thirteen of them were allocated to "Fatherland".

In January 2005, Tymoshenko became Prime Minister of Ukraine under Viktor Yushchenko's presidency.[35][36] Several months earlier, she was a leader in the Orange Revolution which enabled Yushchenko's election.[35][37] 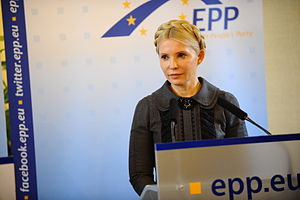 On 18 December 2007 Yulia Tymoshenko was reelected prime minister by a two-vote margin, making Our Ukraine–People's Self-Defense Bloc and the Yulia Tymoshenko Bloc a majority coalition.[39][40] Since 2008, the party has been an observer member of the European People's Party.[10]

In 2009, the "Fatherland" Yulia Tymoshenko has put forward a candidate for the presidency of Ukraine. After its defeat in the elections parliamentary coalition ceased to exist, the Cabinet Tymoshenko was dismissed.Tymoshenko stated on 22 February 2010, she would go into Parliamentary opposition.[41][42] During the 2010 Ukrainian local elections the party (political blocs were not permitted to compete in the election)[43][44] was defeated by the rival Party of Regions in nearly all regions of Ukraine, although it remained the main opposition party.[45] Although Batkivshchyna won seats in 19 of 24 regional parliaments, it did not win a seat in the Supreme Council of Crimea.[46] In Lviv Oblast and Kiev Oblast as well as in Ternopil the party did not participate in the elections cause it was unable to register their candidates; Yulia Tymoshenko claimed that "fraudulent Batkivshchyna party organisations were registered on orders from Viktor Yanukovych".[47][48][49]

On 16 November 2010, the Yulia Tymoshenko Bloc in the Verkhovna Rada was renamed the Bloc Yulia Tymoshenko-Batkivshchyna.[50] During the presidency of Viktor Yanukovych against leader Party Yulia Tymoshenko opened several criminal cases. August 5, 2011 Tymoshenko was arrested. October 11, 2011 sentenced to 7 years in prison on charges of abuse of power and official authority at the conclusion of gas contracts with Russia in January 2009.[22] Danish Helsinki Committee, observing the trial, came to the conclusion that his political motivation, and gross violations of the European Convention on Human Rights.In 2010-2013, the European Parliament adopted six resolutions in which the persecution of Tymoshenko called "politically motivated selective justice".[1][51]

On 17 November 2011, party blocs were banned in parliamentary elections.[18] The following month, Batkivshchyna and the People's Self-Defense party announced that the latter would merge with the former,[52][53] and on 28 December first deputy party head Oleksandr Turchynov said, "I believe that other political forces will join in".[54]

Batkivshchyna, the former Yulia Tymoshenko Bloc member Reforms and Order Party and the People's Movement of Ukraine announced their intention to submit a single party list in the March 2012 parliamentary elections.[55] On 7 April, Arseniy Yatsenyuk announced that the Front for Change party would join them on the single-party list.[56]

On 6 June 2012, Vyacheslav Kutovy and Volodymyr Kupchak left the party;[58] Kupchak he had been threatened by party leader Yatsenyuk and the party had "betrayed Yulia Tymoshenko, who had sparked the protest movement Rise up, Ukraine!".[59] In July 2012, Batkivshchyna agreed with the Svoboda party on the distribution of single-member district candidates in the 2012 parliamentary elections.[60] Two weeks before the 28 October election, Batkivshchyna withdrew 26 parliamentary candidates in favour of the Ukrainian Democratic Alliance for Reform (UDAR); UDAR withdrew 26 of its single-seat candidates in favour of Batkivshchyna candidates, attempting to maximise the opposition vote.[61] 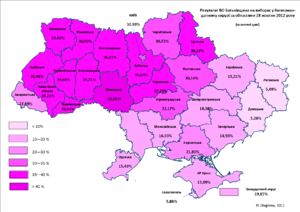 Results of the 2012 elections

Batkivshchyna was a de facto umbrella party in the election, whose election list included members of the Reforms and Order, People's Movement of Ukraine, Front for Change, For Ukraine!, People's Self-Defense, Civil Position and Social Christian parties.[62][63][64][65] In July 2012, members of the Mejlis of the Crimean Tatar People joined the list, known as the Fatherland United Opposition.[66] Front for Change leader Arseniy Yatsenyuk headed the list, because Tymoshenko was imprisoned.[24][57] The list won 62 seats and 25.55 percent of the vote under the proportional party-list system (down from 30.71 percent in 2007 for the Yulia Tymoshenko Bloc[34]), and another 39 in simple-majority constituencies. Competing in 152 of 225 constituencies,;[67] they won a total of 101 seats, 22.67 percent of the 450 seats in the Verkhovna Rada.[68] The party lost about two million votes, compared with the results of the Yulia Tymoshenko Bloc in the previous election.[19] Yatsenyuk was temporarily selected leader of this parliamentary faction (also) on 12 December 2012.[69] On 19 October 2012, Batkivshchyna and Svoboda signed an agreement for "the creation of a coalition of democratic forces in the new parliament".[70] The party is also coordinating its parliamentary activities with UDAR.[71]

In early April 2013 four lawmakers left the party in protest of Yatsenyuk's leadership style, and Roman Stadniychuk was forced to replace Serhiy Vlasenko's parliamentary mandate.[72][73] The following month, Batkivshchyna, UDAR and Svoboda pledged to coordinate for the 2015 Ukrainian presidential election.[74]

In December 2012, the parties which aligned with Batkivshchyna in the 2012 parliamentary elections considered forming a single party.[75] On 15 June 2013, the Reforms and Order Party and the Front for Change merged with Batkivshchyna.[76] A portion of the People's Movement of Ukraine (including former chairman Borys Tarasyuk)[77] also merged; the remainder of the party had merged with the Ukrainian People's Party the previous month.[78]).[79] During the same congress, the party also approved Tymoshenko's nomination as its candidate in the 2015 Ukrainian presidential election.[2] At the party congress, which was held in Kiev on the Sofia area, 482 delegates unanimously supported the candidature of Tymoshenko.[80]

Euromaidan and return to government

The party played a substantial role in the anti-government Euromaidan protests, which began in late November 2013 and culminated in the 21 February 2014 impeachment of President Viktor Yanukovych after the February 2014 Ukrainian revolution, in which Tymoshenko was released from jail and officially rehabilitated.[81][82][83] Just after Euromaidan revolution, the Ukrainian Supreme Court closed the case and found that "no crime was committed".[20] European Court of Human Rights in Strasbourg acknowledged political persecution and torture and put a final end to all criminal case against Yulia Tymoshenko in 2011-2014.[84] After Yanukovych's ouster from the presidency, and return the Constitution of 2004, was formed the ruling coalition, which includes the Batkivshchyna, UDAR and Svoboda. This coalition formed a coalition government, headed by Arseniy Yatsenyuk.

The leader party "Fatherland" Yulia Tymoshenko has begun to reform the party.Early August the party expelled more than 1,500 members, including more than 700 deputies, in a lustration campaign.[85]

The party has its own Batkivshchyna Battalion that fights in the War in Donbass.[86][87] 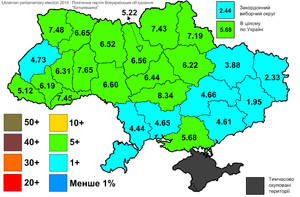 Results of the 2014 elections

After release from prison, in the first days after the treatment Tymoshenko tried to communicate with her former party colleagues, including Yatsenyuk and Oleksandr Turchynov, but phone calls to officials in former prime minister did not answer. "Communication has been completely lost. The government has divided us, - said Tymoshenko ".[88] Much of the party members, including Yatsenyuk, Arsen Avakov, Mykola Knyazhytsky, Turchynov and Lyudmyla Denisova, who worked in the government, refused to go to the polls as part of "Batkivshchyna" and created a political party "People's Front".[89]

The Central electoral Commission registered the party "Batkivshchyna" in nationwide multi-member constituency at the extraordinary elections to the Verkhovna Rada. The decision was taken at the CEC meeting on 22 September 2014. As a result, at the extraordinary parliamentary elections in 2014 the party "Fatherland" was held in Parliament typing (894,837 votes - 5.68%), which allowed it to Verkhovna Rada of Ukraine VIII convocation get 17 seats on party lists, and two seats in majority constituencies.[91] Following the elections the party became a member of the coalition supporting the current second Yatsenyuk Government and has 1 minister in this government.[92][91]

On 5 March 2015 the Parliament supported the bill on supporting volunteers Ukraine.[94]

On 21 April 2015 Yulia Tymoshenko initiated a working group to check the validity of utility tariffs .[95] "Fatherland" party has made the reduction of tariffs for housing and communal services.[96]

The party was one of the winners of the 2015 Ukrainian local elections.[97]

On 17 February 2016 Batkivshchyna withdrew from the ruling coalition following a vote in the Rada to remove Yatsenyuk from his position, which was rejected by a majority.[98]

The party did not join the coalition that supports the 14 April 2016 installed Groysman Government.[99]

According to the Central Election Commission, the results of local elections in 2015 resulted in the All-Ukrainian Union "Fatherland" party placing second in Ukraine. "Fatherland" will be represented 8016 deputies in local councils, and by 369 deputies as heads of villages, towns and cities. In comparison to the 2014 parliamentary elections, "Fatherland" was able to increase its representation by 250%.[97][100][101]

The party manifesto claims that it sees to instill in Ukraine national, democratic, and Christian values, held together through reformation, spirituality, patriotism, national solidarity, responsibility, rights and freedoms. The party advocates transforming Ukraine into a competitive nation-state in the model western Europe based on justice and welfare.[102]

According to the party, only citizens of Ukraine will have the right to private ownership of land, but that "high concentration of land ownership by one person" will be forbidden.[103]

The party sees Ukrainian membership in the European Union (EU) as a strategic goal.[103][104] It favors visa-free travel for Ukrainians to the EU and wants to "cancel humiliating visa regimes".[103] It would like to see "a mutually beneficial and equitable agreement on the establishment of free trade with Russia".[103] In June 2013, the party's parliamentary faction voted for the denunciation of the 2010 Ukrainian–Russian Naval Base for Natural Gas treaty.[nb 1][106]

The party's 2012 election program did not mention NATO,[107] but its 2014 program stated that the party wants to annul Ukraine's non-aligned status[108] and that it wants Ukraine to become a member of NATO.[109]

The party is in favor of party-list proportional representation elections with open lists.[103][107][110] It also favors Citizens' Initiatives when 50,000 signatures are collected.[clarification needed][103] The party wants to empower local governance.[103]

Government grants[clarification needed] should be awarded to graduates who successfully passed testing for studies at Ukrainian universities.[103]

It proposes a Ukraine's health system that has mandatory health inspections and a gradual development of voluntary health insurance system funded by employers.[103]

The party wants to introduce jury trials into the Ukrainian law system and wants to "depoliticise" the process of appointment of judges.[103] It also wants an independent judiciary that will increase the role of the Supreme Court of Ukraine.[107] The Constitutional Court of Ukraine, "which has compromised itself with decisions that were ordered (by the Yanukovych administration)" should be liquidated.[107] It wants the criminal code to be "Europeanized" and law enforcement brought under civil control.[107]

The party regards the Holodomor as a genocide of the Ukrainian nation.[104]

Before their removal of power in February 2014 the party sought to impeach former Ukrainian President Viktor Yanukovych and his "anti-people regime" to "return Ukraine to the path of European integration"[107], while trying to reverse the former Azarov Government policy of raising the status of the Russian language.[111]

May 15, 2016 "Fatherland" prepared a statement in the name of the new Prosecutor General in connection with offenses in the activities of the National Commission, which performs state regulation in the energy and utilities relative to the unjustified increase of gas prices for the population.[112]

May 23, 2016 All-Ukrainian Union "Fatherland" launched a website "Fair rates", which promotes the idea of establishing fair gas tariffs for the population.[113][114]