The Battle of Białystok–Minsk was a German strategic operation conducted by the Army Group Centre during the penetration of the Soviet border region in the opening stage of Operation Barbarossa lasting from 22 June to 3 July 1941. Its goal, the encirclement and destruction of the Red Army's Western Front forces around Minsk, was accomplished. All major Soviet counter-attacks and break-through attempts failed and the defenders were defeated, allowing for the Wehrmacht to take many Soviet prisoners[4] and to further advance into the Soviet Union at a pace so swift that some believed the Germans had effectively won the war against the Soviet Union already.

Facing Army Group Center was the Red Army's Western Front commanded by General of the Army Dmitry Pavlov. It included the 3rd, 4th, and 10th Armies along the frontier. The 13th Army was held as part of the Stavka High Command Reserve and initially existed as a headquarters unit only, with no assigned forces. All together, the Soviet Western Front had 25 rifle and cavalry divisions, 13 tank and 7 motorized divisions.

The Red Army disposition in Belarus was based on the idea of avoiding a war of attrition by engaging in an aggressive counterattack to any invasion, carrying the war into German-occupied Poland. The plan suffered from weakness along the flanks, created by circumstances such as the line of demarcation placement following the division of Poland in 1939. The forward placement of both German and Soviet forces in a double-bulge position enabled both sides to try the double envelopment. However, it was the OKH that undertook it successfully thanks to preempting hostilities, destroying much of the Red Air Force in the airfields while simultaneously severing most of the Soviet Western Front's land forces from lines of communication with other Soviet fronts. The Soviet forces fell to a twin armored encirclement, centred on Białystok and Navahrudak, to the west of Minsk.

On 22 June 1941, the balance of tanks over the entire area of the Soviet Western Front was as follows. 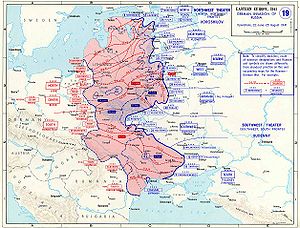 The Red Army moved into Białystok (Poland), which shapes OKH planning. Beyond Białystok, Minsk was a key strategic railway junction and a defensive position of the main road and rail communications with Moscow.

Also caught in the German operation was part of the 11th Army of the Northwestern Front. In the north, 3rd Panzer Group attacked, cutting the 11th Army from Western Front, and crossed the Neman River. The 2nd Panzer Group crossed the Bug River and by 23 June had penetrated 60 km into Soviet territory. The Panzer Groups' objectives were to meet east of Minsk and prevent any Red Army withdrawal from the encirclement. Operating with the Panzer Groups to encircle the Soviet forces, the 9th Army and 4th Army cut into the salient, beginning to encircle Soviet Armies around Białystok. On 23 June, the Soviet 10th Army attempted a counter-attack in accordance with pre-war planning, but failed to achieve its goals. On 24 June, General Pavlov ordered his operations officer, General Boldin, to take charge of the 6th, 11th Mechanized Corps and 6th Cavalry Corps for a counter-attack towards Hrodna to prevent the encirclement of Red Army formations near Białystok. This attack failed with heavy losses, although it may have allowed some units to escape the western encirclement towards Minsk.

In the evening of 25 June, the German XLVII Panzer Corps cut between Slonim and Vawkavysk, forcing Pavlov to order the withdrawal of all troops in the salient behind the Shchara River at Slonim to avoid encirclement. Most formations could not break contact with the Germans, and due to the loss of fuel and transport assets those who could break out, had to withdraw on foot. This withdrawal opened the southern approaches of Minsk.

Five days after the invasion on 27 June, the pincer of Guderian's 2nd Panzer Group and Hoth's 3rd Panzer Group closed east of Minsk. The Panzer Groups had advanced 321 km into the Soviet Union and almost a third of the distance to Moscow. On 28 June, the 9th and 4th German Armies linked up east of Białystok splitting the encircled Soviet forces into two pockets: a smaller Białystok pocket containing the Soviet 10th Army and a larger Navahrudak pocket containing the 3rd and 13th Armies. Ultimately, in 17 days the Soviet Western Front lost 420,000 personnel from a total of 625,000. On 26 June Minsk, the capital of Belarus, fell to the Wehrmacht.

A second Red Army counter-attack by the 20th Mechanized Corps and 4th Airborne Corps failed to breach the encirclement as well, and by 30 June the pocket was completely closed.

The German forces surrounded and eventually destroyed or took prisoner most of the Soviet 3rd and 10th, 13th Armies and part of the 4th Army, in total about 20 divisions, while the remainder of the 4th Army fell back eastwards towards the Western Berezina River.

The Luftwaffe's Luftflotte 2 helped destroy the VVS Western Front. Some 1,669 Soviet aircraft had been destroyed. The Luftwaffe lost 276 as destroyed and an additional 208 damaged. After only a week of fighting, the total serviceable strength of Luftflotte 1, Luftflotte 2 and Luftflotte 4 had been reduced to just 960 machines.[7] 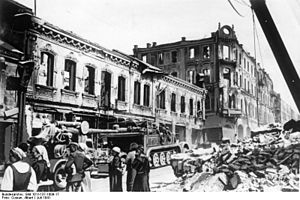 The Soviet troops trapped in the gigantic pockets continued fighting, and concluding operations resulted in high German casualties. Many Soviet troops, an estimated quarter of a million, escaped due to the lack of German infantry troops' motor transport that slowed the encirclement process. Most of these troops were later sent to penal battalions.

The Polish Institute of National Remembrance claims that withdrawing Soviet troops committed regular crimes against the inhabitants of Białystok and its areas, including cases of whole families being executed by firing squads.[8]

On conclusion, 290,000 Soviet soldiers were captured, and 1,500 guns along with 2,500 tanks were destroyed, but 250,000 Soviet troops managed to escape (most of the prisoners would be dead within a few months because of inhumane conditions at the POW enclosures).

The quick advance East created the possibility for the Wehrmacht to advance rapidly towards the land bridge of Smolensk, from which an attack on Moscow could be planned. It also created the impression in the OKW that the war against the Soviet Union was already won, within days of its start. Despite this feat, Hitler blamed the panzer generals for leaving gaps in the lines and the panzer generals for their part were deeply frustrated as for almost a week their advance east had been stopped while they closed the pocket and waited for the infantry to catch up. They feared the momentum of the armored offensive would be lost.

The Front commander General Pavlov and his Front Staff were recalled to Moscow, accused of intentional disorganization of defense and retreat without battle. They were soon executed by the NKVD because of cowardice and "failure to perform their duties". Their families were repressed. They were pardoned in 1956. An exception to this was Pavlov's operations officer, general Ivan Boldin, who had been cut off by the German advance at a forward headquarters in the first days of the invasion and subsequently fought his way back to Soviet lines with over a thousand other soldiers a month and a half later.