The Battle of Borneo was a successful campaign by Japanese Imperial forces for control of Borneo island and concentrated mainly on the subjugation of the Kingdom of Sarawak, Brunei, North Borneo, and the western part of Kalimantan that was part of the Dutch East Indies. The Japanese main unit for this mission was the 35th Infantry Brigade led by Major-General Kiyotake Kawaguchi.

In 1941, Borneo was divided between the Dutch East Indies and British protectorates (North Borneo, Sarawak and Brunei) and crown colonies (Labuan).

The so-called "White Rajahs", the Brooke family, had ruled Sarawak, on the northwest of Borneo, for almost a century, first as Rajahs under the Sultanate of Brunei (a by then tiny but once powerful state entirely enclosed within the borders of Sarawak), and from 1888 as a protectorate of the British Empire. The northeast of the island comprised North Borneo, since 1882 another British protectorate under the British North Borneo Company. Offshore lay the small British crown colony of Labuan.

The rest of the island—collectively known as Kalimantan—was under Dutch control. The Netherlands were invaded by Nazi Germany in 1940. However, Free Dutch forces—mainly the Royal Netherlands Navy and the 85,000-strong[citation needed] Royal Netherlands East Indies Army (KNIL, including a small air service)—fought on, spread throughout the Dutch East Indies, and by December 1941 under an embryonic and somewhat chaotic joint allied command which became the short-lived American-British-Dutch-Australian Command (ABDACOM).

Background to the conflict

The Tripartite Pact—between the three Axis Powers of Germany, Japan and Italy—guaranteed mutual support, and this paid off for Japan in July 1941 when French weakness in the wake of the fall of France to Germany allowed Japan to occupy French Indo-China (now modern Vietnam, Laos and Cambodia). This gave Japan land access to the Chinese mainland where it had long been engaged in military intervention and, since 1937, had been fighting a full-on war of invasion against the temporarily allied forces of the Kuomintang and the Communist Party of China. It also gave Imperial Japan a seaboard facing Sarawak and North Borneo across the China Sea. Japan turned its eyes from the war in China and towards strategic targets in the Pacific and the Dutch East Indies. In December that year, Japan struck out against U.S. possessions in Hawaii and the Philippines, declaring war on the U.S. and finally precipitating Germany's official declaration of war on America according to the Pact.

With its rich petroleum exploitation capacity, for instance at Tarakan, Balikpapan and Banjarmasin, Borneo was a prime target for Japan, and a very poorly guarded one. Chronically short of natural resources, Japan needed an assured supply of fuel in order to flex its muscles and achieve its long-term goal of becoming the major power in the Pacific region. Borneo also stood on the main sea routes between Java, Sumatra, Malaya and Celebes. Control of these routes were vital to securing the territory.

Defence in Sarawak and North Borneo

The main objectives were the oilfields at Miri in Sarawak region and Seria in Brunei. The oil was refined at Lutong near Miri. Despite rich oil supplies, the Sarawak region had no air or sea forces to defend it. Only in late 1940 did Air Chief Marshal Sir Robert Brooke-Popham order the 2nd Battalion, 15th Punjab Regiment, a heavy 6 in (150 mm) gun battery from the Hong Kong-Singapore Royal Artillery, and a detachment of 35th Fortress Company (Royal Engineers) to be positioned at Kuching. They numbered about 1,050 men. In addition, the Brooke White Rajah government also organised the Sarawak Rangers. This force consisted of 1,515 men who were primarily Iban and Dayak tribesmen. Altogether these forces were commanded by British Lieutenant Colonel C.M. Lane and was known as "SARFOR" (Sarawak Force).

After having heard of the attack on Pearl Harbor, on 8 December 1941, the Brooke government instructed that the oilfields at Miri and Seria and refinery at Lutong be quickly demolished.

The Dutch forces had an important airfield at near the border of British Malaysia (Sarawak) called "Singkawang II", which was defended by about 750 Dutch troops. On 25 November five Brewster F2A Buffalo fighter planes arrived for local defence followed in the beginning of December by Martin B-10 bombers.

Dutch forces in West Borneo consisted of the following units:

The town of Pontianak was finally occupied by the Imperial Japanese forces on 29 January 1942.

Japanese landing and the battle 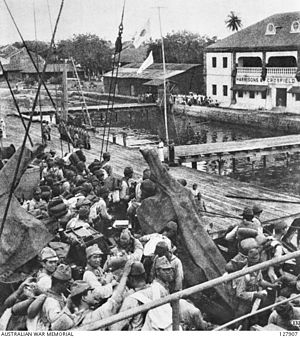 The Japanese landing off the west coast of British North Borneo in Labuan, 1942

On 13 December 1941, the Japanese invasion convoy left Cam Ranh Bay in French Indochina, with an escort of the cruiser Yura (Rear-Admiral Shintaro Hashimoto) with the destroyers of the 12th Destroyer Division, Murakumo, Shinonome, Shirakumo and Usugumo, submarine-chaser Ch 7 and the aircraft depot ship Kamikawa Maru. Ten transport ships carried the Japanese 35th Infantry Brigade HQ under the command of Major-General Kiyotake Kawaguchi. The Support Force—commanded by Rear-Admiral Takeo Kurita—consisted of the cruisers Kumano and Suzuya and the destroyers Fubuki and Sagiri.

The Japanese forces intended to capture Miri and Seria, while the rest would capture Kuching and nearby airfields. The convoy proceeded without being detected and, at dawn on 16 December 1941, two landing units secured Miri and Seria with only very little resistance from British forces. A few hours later, Lutong was captured as well.

Dutch Martin B-10 bombers made attacks on Japanese shipping at Miri on 17, 18 and 19 December from their base 'Singkawang II'. The Dutch bombers retired (meant to be temporarily) to Sumatra on 23 December since 'Singkawang II' airfield was discovered by the Japanese and the first bombing attack against the airfield had been carried out on 22 December. On 24 and 28 December B-10 bombers from a different unit flew missions against Kuching from Singapore, Sembawang. In the evening of 23 December Dutch submarine K-XIV hit four out of six Japanese transport ships at Kuching with torpedoes (the cargo ship Katori Maru sank while two other ships where damaged 'moderate' and one ship sustained light damage). On the night of 24–25 December Dutch submarine HNLMS K XVI sank the Japanese submarinechaser 'Sagiri' 30 Miles north of Kuching. K-XVI was lost the following day by a torpedo from Japanese submarine I66.

Meanwhile, on 31 December 1941, the force under Lieutenant Colonel Watanabe moved northward to occupy Brunei, Labuan Island, and Jesselton (now called Kota Kinabalu). On 18 January 1942, using small fishing boats, the Japanese landed at Sandakan, the seat of government of British North Borneo. The North Borneo Armed Constabulary, with only 650 men, hardly provided any resistance to slow down the Japanese invasion. On the morning of 19 January, Governor Charles Robert Smith surrendered British North Borneo and was interned with other staff.

After securing the oilfields, on 22 December, the main Japanese forces moved westwards to Kuching. The Japanese airforce bombed Singkawang airfield to prevent a Dutch attack. After escorts drove off a lone Dutch submarine, the Japanese task force entered the mouth of the Santubong river on 23 December. The convoy arrived off Cape Sipang and the troops in twenty transports, commanded by Colonel Akinosuke Oka, landed at 04:00 the next morning. Although 2nd Battalion, 15th Punjab Regiment, resisted the attack, they were soon outnumbered and retreated up the river. By the afternoon, Kuching was in Japanese hands.

At about 16:40 on 25 December, Japanese troops successfully captured Kuching airfield. The Punjab regiment retreated through the jungle to the Singkawang area. After Singkawang was secured as well on 29 December, the rest of the British and Dutch troops retreated further into the jungle southward trying to reach Sampit and Pangkalanbun, where a Dutch airfield at Kotawaringin was located. South and central Kalimantan were taken by the Japanese Navy following attacks from east and west. After ten weeks in the jungle-covered mountains, Allied troops surrendered on 1 April 1942.