The Battle of Changde (Battle of Changteh; simplified Chinese: 常德会战; traditional Chinese: 常德會戰; pinyin: Chángdé Huìzhàn) was a major engagement in the Second Sino-Japanese War in and around the Chinese city of Changde (Changteh) in the province of Hunan. During the battle, Japan extensively used chemical weapons.

The purpose of the Japanese offensive was not to hold the city, but to maintain pressure on the Chinese National Revolutionary Army "in order to destroy their main units, to deny them the time needed for recuperation, regrouping, and retraining, and to make sure that no Chinese troops could be spared for the Burma front."[2]

Although the Japanese army initially successfully captured the city, the Chinese 57th division was able to pin them down long enough for reinforcements to arrive and encircle the Japanese. The Chinese army then cut off the Japanese supply lines, forcing them into retreat, whereupon the Chinese pursued their enemy.[1]

On the 14th, the Japanese 13th division, with aid from collaborators, drove south to break through the defense lines of the Chinese 10th and 29th group armies. On the 16th, Japanese paratroopers landed on Taoyuan, a county in the Changde region. At the same time, the Japanese 3rd and 116th divisions reached Changde. The city was guarded by the Chinese 74th corps' 57th division, whose commander, Yu Chengwan, led his single division of 8,000 soldiers to fight against the overwhelming attack of 2 Japanese divisions. 11 days and nights of fierce fighting saw heavy casualties on both sides. When Chinese reinforcements finally arrived, the remaining 100 survivors of the 57th division, all of whom were wounded, escaped the city. On the 6th of December, Changde was lost.

While the Chinese 57th division pinned down the Japanese in the city, the rest of the 74th corps, and 18th, 73rd, 79th, and 100th corps, as well as the 9th war area's 10th corps, 99th corps and Jiangxi's 58th corps arrived at the battlefield, forming a counter-encirclement on the Japanese forces.

Fang Xianjue's 10th corps was first to strike, successfully retaking Deshan on the 29th of November, before attacking the Japanese positions at Changde from the south. Unable to withstand the fierce Chinese assault, the Japanese utilized chemical weapons.[10] The battle lasted for 6 days and nights. The Chinese 10th division's commander Sun Minjin was shot 5 times in the body and killed in action.

The Chinese units pursued the retreating Japanese army for more than 20 days. By January 5, 1944, the Japanese forces were pushed back to their original positions prior to the invasion, thus concluding the engagement as a decisive Chinese victory.

The Changde campaign had the largest participation of the Chinese air force since the Battle of Wuhan.[1] 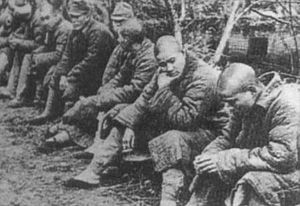 Although the Japanese army was initially able to capture Changde and cause terror among the civilians, the Chinese were ultimately able to liberate the city and defeat their enemy, inflicting severe losses.

The 2010 Chinese war film Death and Glory in Changde is based on the events in this battle.