The Battle of Heartbreak Crossroads was fought at a vital crossroads near a forester's cabin named Wehlerscheid, astride the West Wall that ran along the Hoefen-Alzen and Dreiborn ridges, about 5.6 miles (9.0 km) north of Krinkelt-Rocherath, Belgium. In early December, the U.S. V Corps trucked the experienced 2nd Infantry Division from positions it had held in the south to Krinkelt-Rocherath, twin villages adjacent to Elsenborn Ridge and near the southern tip of the Battle of Hürtgen Forest.

On the eastern side of the West Wall was an excellent road network leading to the Roer River dams a few miles to the northeast and the Allies' next goal. The Americans were assigned with capturing the crossroads with the goal of destroying the dams, or failing that, force the Germans to blow them up.[1] The dams were important to the Germans because they could be used defensively to control the flow and depth of the Roer River, blocking and delaying Allied advances.

During the first two days of the battle, the Americans failed to advance and experienced significant losses. On the third day a platoon infiltrated the German lines and late on 15 December, the U.S. troops captured the crossroads. On 16 December, the German Unternehmen Wacht am Rhein offensive threatened to cut the American's rear lines and they were forced to withdraw to the twin villages. The villages lay astride a key rollbahn to the west that the Germans wanted to capture in their attack west towards Antwerp. This turned into the Battle of Elsenborn Ridge, which was the only portion of the Battle of the Bulge where the Allies didn't yield to the Germans.

From Krinkelt-Rocherath, a two-lane secondary road passed north through the Monschau Forest to the Wehlerscheid crossroads, which was guarded by a constellation of 25 concrete pillboxes girding both sides of the road. The Germans had cleared the ground near the crossroads of trees to give their troops a clear field of fire, and laced the area with antipersonnel mines and masses of barbed wire six to ten deep.[2][3]

On about December 12, the 2nd ID was brought to the rear of the yet untested 99th ID on Elsenborn Ridge and passed through their lines headed for the Wehlerscheid crossroads. The 2nd ID's commanding officer, General Walter M. Robertson, directed the 9th Infantry Regiment to attack along the only road, capture the junction, and then swing northeast to clear German forces along the Hoefen-Alzen ridge. He ordered the 38th Infantry Regiment to attack northeast from the road junction along the Dreiborn ridge, in the direction of the Roer River dams. The 23rd Infantry was held in reserve.[2]:610

The sector along the northeast side of the road assigned to the 9th Infantry was technically within the 99th Division’s defensive responsibilities, but that division was stretched very thinly over an elongated front. Some parts were not defended from fixed positions and only patrolled. That left a gap on the northeastern side of the road where the southeastward curve of the 99th Division’s line left the sector open to enemy penetration from the east. This prompted General Leonard T. Gerow on December 13 to order the 395th Regimental Combat Team (RCT), made up of two battalions of the 395th Infantry Regiment and another borrowed from the 393rd, to make a limited attack on the 2nd Division’s immediate right flank against German positions about 1.4 miles (2.3 km) southeast of Wahlerscheid.[1]

The 3 miles (4.8 km) of dense woods between Krinkelt-Rocherath and Wahlerscheid made accurate estimations of enemy strength difficult. The U.S. infantry were supported by a battalion of 105-mm. howitzers, another of 4.5-inch rockets, a battery of 155-mm. self-propelled guns, a company of chemical mortars, a medium tank battalion, and two battalions of tank destroyers. This was reinforced by the 406th Field Artillery Group and their four battalions of 155-mm. caliber or larger artillery. Combat Command B of the 9th Armored Division was attached to exploit a possible breakthrough.[2]

An hour after sunrise on 13 December, the American infantry set off through the brush and thick woods on either side of the road, avoiding the mines known to block the road. The GIs were slowed by knee-deep snow in places, the dense, unfamiliar forest that dropped wet snow on them, and ravines full of melting snow that filled their boots. To avoid repeating the resupply difficulties encountered by the 28th Infantry Division in their battle further north near the Our and Sauer Rivers,[4] Schmidt ordered his men to carry enough rations, ammunition, and antitank mines to last for at least 24 hours without resupply.[2] Troops were carrying up to 120 pounds of gear.

The 277th Volksgrenadier Division's 991st Regiment was in the Monschau Forest about 1.5 miles (2.4 km) southeast of Wahlerscheid.[5] The 2nd ID intended to surprise the Germans and advanced without artillery preparation. Their movement forward through the forest went well at first with little resistance,[1] but once they gained the edge of the cleared forest around the pillboxes on December 14, they found themselves facing four pillboxes, six concrete bunkers, a forester’s lodge, and a custom house, grouped compactly about the road junction and sited to provide interlocking fire for their machine gun and rifle positions.[2]

File:Heartbreak Crossroads.jpg
The crossroads at Wahlerscheid on February 13, 1945 after it was recaptured by the 9th ID.

The U.S. soldiers were met with concentrated fire from hundreds of German weapons. One squad managed to crawl forward to a slight rise about 80 yards (73 m) from the edge of the forest. From there, they were able to call in accurate artillery fire, but could not penetrate the barbed wire, and withdrew. The fight continued for two more days with little progress. On the first day, the battle for the crossing earned the nickname that stuck with it after the war, the Battle of Heartbreak Crossroads.[6]:324 The Americans pulled their troops back and called in American artillery, including the huge 155mm Long Tom cannon, which repeatedly targeted the pill boxes.[3] The Americans tried to clear the waves of barbed wire with bangalore torpedoes but their progress was slowed by wet fuses.

On the south side of the road, two U.S. squads crawling on their stomachs found a way through the well-emplaced German guns and cut the barbed wire to forge a path between the German defenses. They penetrated a trench line behind the pill boxes and held off German patrols for five hours, but when dark fell they returned to the American lines. On December 15, an American patrol advanced once more through the breach in the barbed wire and captured a portion of the trench line. They alerted the regimental command post, and Colonel Higgens, commanding officer of the 2nd Battalion, led two companies of GIs into the trenches behind the pill boxes. By the early morning of December 16, they gained control of several pillboxes, but didn't have sufficient TNT on hand to destroy them.[3] On December 16, the 9th Infantry Regiment pressed the attack another 1,500 yards (1,400 m) against stubborn resistance and captured the crossroads and the road network around it.[3]

The U.S. First Army thought the Germans might initiate a spoiling attack to try to break up the U.S. drive.[7] General Hodges remained convinced throughout 16 December that the counter-attack was nothing more than a spoiling offensive, as did General Omar Bradley at Twelfth Army Group HQ. Gerow called Hodges in Paris on the afternoon of the 16th to request permission to call off the attack on Hurtgen and reinforce the 2nd and 99th ID. Hodges said no. The 2nd ID continued to attack eastward throughout 16 December, but late in the evening they were told to hold their lines.[8]:206–209

When Bradley finally learned that the Germans had attacked the American lines in five places across the Ardenne, he knew the Allies were in for a fight. During the morning of 17 December, elements of the 23rd Infantry Regiment, 2nd Infantry Division were attacked by a numerically superior force of German infantry and tanks. They repulsed the first six waves with heavy casualties, leading to a last ditch defense. Heavy machine gunner Richard Cowan was later awarded the Medal of Honor for single-handedly killing an estimated one hundred of the enemy before his unit withdrew.[9] At 1230 on 17 December, Gerow finally got permission from Hodges to break contact and withdraw towards the twin villages.[8] They regretted their failure to destroy the pillboxes when they were forced to recapture the crossroads again in early February 1945. 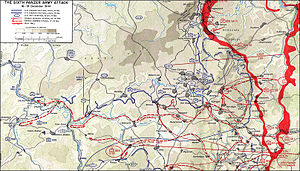 Northern shoulder of the Battle of the Bulge in which the German Sixth Panzer Army attacked the United States' 99th Infantry Division, but could not dislodge them.

During the night of the 16th and dawn of the 17th, General Walter Melville Robertson, Commander of the U.S. 2nd Infantry Division, consolidated his and other forces that had only a day before captured the vital crossroads at Wahlerscheid. To the east of Rocherath and Krinkelt, the Germans had made a deep penetration and were liable at any moment to come bursting out of the forest. The U.S. had to hold the twin villages to allow the 2nd ID with its heavy weapons and vehicles to reach positions around Elsenborn intact. The 99th Division had already put its last reserve into the battle. The 2nd ID with the attached 395th were left to defend the endangered sector of the corridor south.[10]

The 9th Infantry Regiment pulled back to another crossroads in the forest at Baracken, about 5 miles (8.0 km) to the south of the cross roads at Wahlerscheid.[11] The other units moved south through the area near the twin villages. Robertson moved his headquarters from Wirtzfeld, south and west of the twin villages, to Elsenborn, just west of the ridge line. Robertson also informed General Leonard T. Gerow, commander of V Corps, that he intended to hold the twin villages until troops east of the villages had retreated through them to the ridge line, which then would become the next line of defense. This defensive line was intended to safeguard the key high ground on Elsenborn Ridge from the German advance.