From Infogalactic: the planetary knowledge core
Jump to: navigation, search
For the First Battle of Kiev, see Battle of Kiev (1941).

The Second Battle of Kiev describes three strategic operations (two offensive and one defensive) by the Soviet Red Army, and one operational counterattack by the Wehrmacht which took place in the wake of the failed German offensive at Kursk during World War II. These four operations took place between 3 October and 22 December 1943.

The Red Army launched their first summer offensive of the war,[citation needed] pushing Erich von Manstein's battered Army Group South back towards the Dnieper River. There, Manstein intended to rest and refit his troops, but that was not to be. Stavka, the Soviet high command, ordered the Central Front and the Voronezh Front to force crossings of the Dnieper before the Germans could recover. When this was unsuccessful in October, the effort was handed over to the 1st Ukrainian Front, with some support from the 2nd Ukrainian Front. The 1st Ukrainian Front, commanded by Nikolai Vatutin, was able to secure bridgeheads north and south of Kiev. His opponent would be the veteran 4th Panzer Army, commanded by Hermann Hoth.[citation needed]

The structure of the strategic operations from the Soviet planning point of view was: 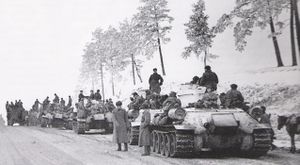 In October 1943, several of Vatutin's armies were having serious trouble trying to break out of the rugged terrain of the Bukrin bend, the southern bridgehead. The 24th Panzer Corps of Walther Nehring, in an effective defensive position, had the opposing Soviet forces squeezed in. As a result, Vatutin decided to concentrate his strength at the northern bridgehead at Lyutezh.

The 3rd Guards Tank Army, commanded by Pavel Rybalko, moved northwards toward the Lyutezh bridgehead under cover of darkness and diversionary attacks out of the Bukrin bend. Masses of artillery were shifted northwards, but the movements went unnoticed by the Germans.

Early on the morning of 3 November 1943, the 4th Panzer Army was subjected to a massive Soviet bombardment. The German forces screening the bridgehead were defeated, and Kiev was quickly captured. The 1st Ukrainian Front's objective was to drive quickly westward in order to take the towns of Zhitomir, Korosten, Berdichev and Fastov, and to cut the rail link to Army Group Center; this would be the first step towards the encirclement of Army Group South.

The plan went very well for Vatutin; Manstein, however, became worried. As Rybalko's tanks moved through the streets of Kiev on 5 November, Manstein pleaded with Adolf Hitler to release the 48th and 40th Panzer Corps in order to have sufficient forces to retake Kiev. The 48th Panzer Corps was committed to Manstein. Hitler refused to divert the 40th Panzer Corps, and replaced Hoth with Erhard Raus, who was ordered to blunt the Soviet attack and secure Army Group South's northern flank and communications with Army Group North. A number of sources give 6 November as the date for the fall of Kiev.[1][2][3] The 1st Czechoslovak Independent Brigade seems to have started the assault earlier, at 12.30 on 5 November, reaching the Dniepr at 02.00 on the 6th, after sweeping through the western suburbs of the city and were the first unit in the city center, with Kiev finally being captured at 06.50 on the 6th.[4]

Raus was in difficulty with his units suffering heavy casualties in the initial stages of Vatutin's offensive. The 4th Panzer Army was reinforced, especially with artillery and rockets. The German divisions were bolstered on 7 November by the arrival of the newly formed 25th Panzer Division commanded by General der Panzertruppen Georg Jauer. Its drive on Fastov was halted by the 7th Guards Tank Corps. Rybalko was soon just 40 mi (64 km) from Berdichev. Zhitomir was taken by the 38th Army; the 60th Army was at the gates of Korosten; 40th Army was moving south from Kiev. The only respite for the Germans came when the 27th Army exhausted itself and went over to the defensive in the Bukrin bend. 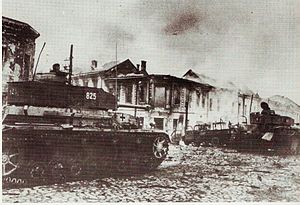 The 4th Panzer Army was in deep trouble. However, the situation changed with the arrival of Hermann Balck's XLVIII Panzer Corps, comprising the 1st SS Division, 1st Panzer Division and 7th Panzer Division. Balck drove his forces north to Brusyliv and then west to retake Zhitomir. Rybalko sent the 7th Guards Tank Corps to counter the German assault. A huge tank battle ensued, which continued until the latter part of November, when the autumn mud halted all operations.

Both sides had suffered heavy losses. The casualty ratio was fairly balanced, though the Soviets lost slightly more than the Germans. With the recapture of Zhitomir and Korosten the 4th Panzer had gained some breathing room. With Vatutin halted, Stavka released substantial reserves to his First Ukrainian Front to regain momentum.

By 5 December, the mud had frozen in the Soviet winter. 48th Panzer Corps conducted a wide sweeping attack north of Zhitomir. Catching the Soviets by surprise, the Germans sought to trap the Soviet 60th Army, and the 13th Corps. Reinforced with the 2nd Fallschirmjäger Division, the Germans drove eastward, putting the Soviets on the defensive. With Fastov also being threatened, the 60th Army withdrew from Korosten.

Vatutin was forced to ask Stavka for more reserves, and was granted 1st Tank Army and 18th Army. These new units, along with additional Corps from other sectors, were hastily rushed westward. Thus, the Soviets stopped the German advance, went back on the offensive, and retook Brusilov. Both sides were exhausted by late December and the battle for Kiev was over. 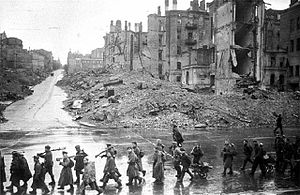 Although the Soviets had failed to break the rail link with Army Group Center or envelop Army Group South, they had conquered Kiev, the third biggest city in the Soviet Union, broken the Dnieper line, and inflicted significant casualties on the 4th Panzer Army. The Germans, for their part, had destroyed several sizable Soviet formations and kept the vital rail link open. But there was to be no rest. A few days after XLVIII Panzer Corps was pulled out to rest and refit, the Soviets launched their winter offensive on Christmas Eve. The renamed Voronezh Front Offensive succeeded in pushing the Germans back to the 1939 Polish border by 3 January 1944.