From Infogalactic: the planetary knowledge core
(Redirected from Battle of Kiska)
Jump to: navigation, search

Operation Cottage was a tactical maneuver which completed the Aleutian Islands campaign. On August 15, 1943, Allied military forces landed on Kiska Island, which had been occupied by Japanese forces since June, 1942. The Japanese, however, had secretly abandoned the island two weeks prior, and so the Allied landings were unopposed. Despite this, after over two days in thick fog and in a confused state of affairs, U.S. and Canadian forces mistook each other for the enemy. The brief firefight left 32 dead, with a further 50 wounded on either side and 130 trench foot wounds.[1] Allied forces suffered over 300 casualties in total during the operation, due to stray Japanese mines, friendly fire incidents, and the difficult terrain.

The Japanese under Captain Takeji Ono had landed on Kiska at approximately 01:00 on June 7, 1942, with a force of about 500 Japanese marines. Soon after arrival, they stormed an American weather station. Here they killed two and captured eight United States Navy officers. The remaining eight were sent to Japan as prisoners of war. Another 2,000 Japanese troops arrived, landing in Kiska Harbor. At this time, Monzo Akiyama, a Rear-Admiral, headed the force on Kiska. In December 1942, additional anti-aircraft units, engineers, and a negligible number of reinforcement infantry arrived on the island. In the spring of 1943, control was transferred to Kiichiro Higuchi. 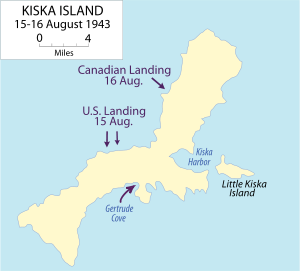 A Consolidated B-24 Liberator aircraft sighted Japanese ships in Kiska. No further identification was visible. To United States naval planners, none was necessary and the orders to invade Kiska soon followed.[citation needed]

Due to the heavy casualties suffered at Attu Island, planners were expecting another costly operation. The Japanese tactical planners had, however, realized the isolated island was no longer defensible and planned for an evacuation.

Although small, there were signs of Japanese retreat. Anti-aircraft guns, once active during the bombardment of Kiska, were silent when Allied planes flew over in the days leading up to the invasion.

Both U.S. and Canadian forces mistook each other as the Japanese and, as a result of friendly fire, 28 Americans and 4 Canadians were killed, with wounded on either side.[1] A stray Japanese mine caused the USS Abner Read (DD-526) to lose a large chunk of its stern. The blast killed 71 and wounded 47. 191 troops went missing during the two-day stay on the island and presumably also died from friendly fire, booby traps, or environmental causes. Four other troops had also been killed by landmines or other traps.