For the opera 'The Battle of Kulikovo' see Dmitry Donskoy (opera)

The Battle of Kulikovo (Russian: Мамаево побоище, Донское побоище, Куликовская битва, битва на Куликовом поле) was fought between the armies of the Golden Horde under the command of Mamai, and various Russian principalities under the united command of Prince Dmitri of Moscow. The battle took place on 8 September 1380, at the Kulikovo Field near the Don River (now Tula Oblast) and was won by Dmitri, who became known as Donskoy (of the Don) after the battle.

Although the victory did not end the Mongol domination over Russia, it is widely regarded by Russian historians as the turning point when Mongol influence began to wane and Muscovite power to rise. This process eventually led to Muscovite independence and formation of the modern Russian state. According to the Russian historian Lev Gumilev, "Russians went to the Kulikovo field as citizens of various principalities and returned as a united Russian nation".[6] 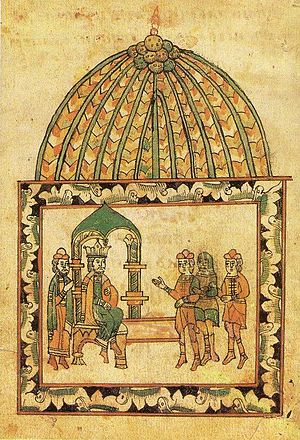 Dmitry captures a warrior of the Golden Horde.

After the Mongol-Tatar conquest, the territories of the disintegrating Kievan Rus became part of the western region of the Mongol Empire (also known as the Golden Horde), centered in the lower Volga region. The numerous Russian principalities became the Horde's tributaries. During this period, the small regional principality of Moscow was growing in power and was often challenging its neighbors over territory, including clashing with the Grand Duchy of Ryazan. The intrigues between Moscow and Ryazan pre-date the Mongol-Tartar conquest, having arisen during the ascent of regional powers within the Kievan Rus.

In 1362, the Prince of Moscow, Dmitri Donskoi, came into physical possession of the Grand Duchy of Vladimir. He sought a jarliq (law pronouncement) from Mamai granting him formal possession of the Duchy. Instead, in 1371, Mamai passed its title to the Prince of Tver. Prince Dmitri refused to accept Mamai's decision. Conflict ensued in 1377, when a friend of Mamai Arpash defeated the united armies of Suzdal and Moscow, led by Prince Dmitri, at the Battle of Pyana River. The victors then began to raid Nizhniy Novgorod and Ryazan.

After the victory, Mamai sought to re-affirm his control over the tributary lands of the Golden Horde. In 1378, he sent forces led by the warlord Murza Begich to ensure Prince Dmitri's obedience. The Horde's army was defeated at the Battle of the Vozha River and Murza Begich was killed. Meanwhile, another khan, Tokhtamysh, arose in Middle Asia to challenge Mamai for the throne of the Golden Horde. Although initially unsuccessful, khan Tokhtamysh slowly began to solidfy support for his challenge to the rulership of the Horde.

In 1380, against this backdrop, Mamai chose to personally lead the Horde's forces against the forces of Moscow. In preparation for the invasion, he negotiated with both Prince Jogaila of Lithuania and a Russian prince Oleg II of Ryazan, who struggled against Dmitry. The armies of Lithuania and Ryazan marched to join the Horde's army, and Mamai camped his army on the bank of the Don river, waiting for their arrival.

While Mamai camped, Prince Dmitry mobilized his troops and allies in Kolomna to resist the invasion. The army of Moscow was joined there by armies from most of other Russian principalities, including Tver, Suzdal, Rostov, Yaroslavl, Polotsk, Murom and Beloozero. Many of participants had to break their former loyalties: army of Smolensk, formally Jogaila's vassals, joined Dmitry, as did Jogaila's brothers Andrei of Polotsk and Dmitry of Bryansk. In spite of Oleg's alliance with Mamai, a number of Ryazan boyars defected with their servants to join Dmitry (the exact number is not known, but some 70 of Ryazan boyars were listed among dead after the battle). According to Sergius of Radonezh's hagiography, Saint Sergius met Dmitri, blessed the Russian armies before the battle, and sent a group of warrior monks to accompany the combined force.

Prince Dmitri learned of the approaching armies of Lithuania and Ryazan. On 7 September 1380, Prince Dmitri's forces crossed the Don to attack, before his enemies could combine their forces. 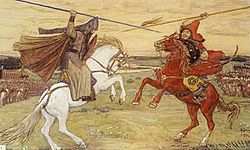 The duel of Alexander Peresvet and Mamai's champion. By Victor Vasnetsov

Combined Russian armies under the command of the Grand Prince of Vladimir, Dmitri Ivanovich of Moscow (called "Dmitry of the Don", in Russian "Donskoy"), faced a much larger Tatar force under the command of Mamai, a strongman of the Golden Horde. Mamai's allies, Grand Prince Oleg II of Ryazan and Grand Prince Jogaila of Lithuania, were late to the battle. According to a theory put forward by historian Dmitry Balashov, Oleg was actually not willing to join any side at all, and probably even sent some of his aforementioned "defectors" to help Dmitry, while pretending that Ryazan in general remained loyal to the Horde.

The old Russian poem Zadonshchina lists 150,000 Russians and 300,000 Tartaro-Mongols as taking part in the battle, but the actual size of the Kulikovo Field would not allow such a number of troops. The figures were more likely closer to 60,000 Russians, including 7,000 rebel Lithuanians and 125,000 Tatars. Mamai's army also included an unknown number of mercenaries he hired in a Republic of Genoa fortress Caffa (modern Feodosia, Crimea).[6] 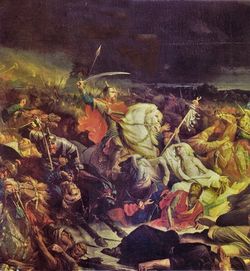 Dmitry Donskoy in the thick of the fray; painting by Adolphe Yvon. 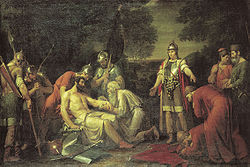 An exhausted Dmitry having his wounds cared for after the battle. By Vasily Sazonov

On the morning of September 8, a thick fog covered the fields of Kulikovo, preventing battle from being joined. The fog cleared around 11 a.m., and both armies began to advance.

The battle opened with single combat between two champions. The Russian champion was Alexander Peresvet, a monk from the Trinity Abbey sent to the battle by Saint Sergius. The Horde's champion was Temir-murza (also Chelubey or Cheli-bey). Though each champion killed the other during the first pass of the contest, Peresvet did not fall from the saddle, while Temir-murza did (according to Russian sources).

During the battle, Dmitri exchanged his armor with young Moscow boyarin Mikhail Brenok, in order to pretend to be an ordinary knight. Brenok was instructed to imitate the Prince, bearing his banner and wearing his armor. The trick was successful: the Tatars aimed their fire at Dmitri's banner and ultimately killed Brenok, believing he was the Prince. Dmitri himself survived, although wounded, and immediately after the battle fainted from exhaustion and loss of blood.

After approximately three hours of battle (from noon to 3pm) the Russian forces were successful, despite great casualties, in holding off the Horde's attack. The cavalry of Vladimir, Prince of Serpukhov (Dmitri's cousin), led by Prince Bobrok (Prince Dmitri's brother-in-law), launched a surprise counterstrike on the Horde's flank, which led to the collapse of the Horde's line.

Upon learning of Mamai's defeat, Prince Jogaila turned his army back to Lithuania. Prince Oleg of Ryazan was forced to accept Prince Dmitri as his sovereign and to sign a treaty of peace. Mukhammad-Bulek, Mamai's figurehead Khan, was killed in battle. Mamai escaped to the Genoese stronghold Caffa in Crimea and was soon assassinated by the mercenaries, whom he failed to pay. Mamai's rival, khan Tokhtamysh, was left in uncontested control of the Horde.

Prince Dmitri did not manage to become fully independent from the Golden Horde, however. In 1382, Khan Tokhtamysh launched another campaign against the Grand Duchy of Moscow. He captured and burned down Moscow, forcing Dmitri to accept him as sovereign. However, the victory at Kulikovo was an early sign of the decline of Mongol power. In the century that followed, Moscow's power rose, solidifying control over the other Russian principalities. Russian vassalage to the Golden Horde officially ended in 1480, a century after the battle, following the defeat of the Horde at the great stand on the Ugra River.

The site of the battle is commemorated by a memorial church, built from a design by Aleksey Shchusev. A minor planet, 2869 Nepryadva, discovered in 1980 by Soviet astronomer Nikolai Stepanovich Chernykh, was named in honor of the Russian victory over the Tataro-Mongols.[7] 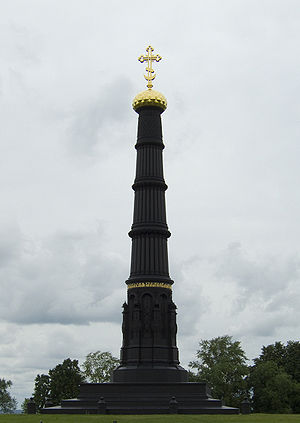 The historical evaluation of the battle has many theories as to its significance in the course of history. 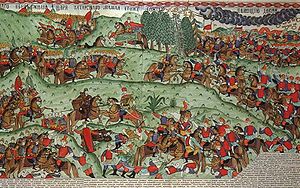