The Battle of Saint-Lô is one of the three conflicts in the fr (Battle of the Hedgerows), which took place between July 9-24, 1944, just before Operation Cobra. Saint-Lô had fallen to Germany in 1940, and, after the Invasion of Normandy, the Americans targeted the city, as it served as a strategic crossroads. American bombardments caused heavy damage (up to 95% of the city was destroyed) and a high number of casualties, which resulted in the martyr city being called "The Capital of Ruins", popularized in a report by Samuel Beckett. 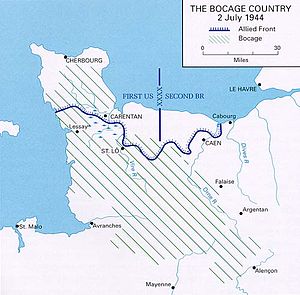 Front lines shortly before the battle

France was invaded in 1940 and the 7th Panzer Division, commanded by Erwin Rommel, entered Normandy, with the objective of capturing Cherbourg Harbor. Saint-Lô fell under German control on the night of June 17, 1940. During the occupation, the statue of la Laitière normande (the Norman milkmaid), created by Arthur Le Duc was dismantled and melted down to make cannons, despite opposition from local politicians.

In 1943, the Germans began digging an underground hospital, which remains today, using the slave labor of the STO.

A German soldier was shot in January 1944, and many Saint-Lô residents were detained. The movie theater, theater, and bars were closed, radios were confiscated, and the curfew was moved to 8PM.[1] 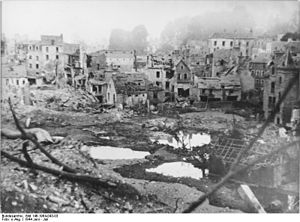 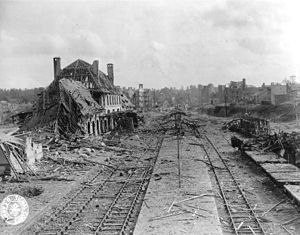 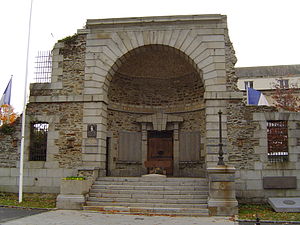 Due to its strategic importance as a crossroads, a bombardment by the Americans, focusing on the railway station and the power plant,[2] began on the night of June 6, and lasted into the morning of June 7. The objective was to cut off German reinforcements in Brittany from the front.

Warning leaflets were dropped the day before, but high winds dispersed them to neighboring communities, failing to alert local residents. Over two hundred prisoners were killed at the local prison, including seventy-six imprisoned French patriots (all that remains of the prison today is the gate). Over one thousand of about twelve thousand citizens were killed.

The capital of ruins

The task of taking control of Saint-Lô was entrusted to the XIX corps of the First United States Army, under General Corlett. As of July 15, 1944, this included:

Opposing them, the German army had two corps protecting the Saint-Lô front:

The 29th Division attacked the northeast sector of Saint-Lô, near the Madeleine. A battalion led by Major Sidney Bingham, called the "lost battalion" found itself isolated for a whole day without ammunition and with little food. They had 25 wounded, with only three nurses, and were surrounded by German forces. Planes were called in to drop plasma. Martainville hill was continuously showered by German artillery. On July 17, the 3rd battalion, under Major Thomas D. Howie, joined up with the lost battalion around 4:30 in the morning. Hidden by dense vegetation, the 3rd battalion had orders not to return enemy fire, and use only their bayonets. The mission was successful, but Howie was fatally wounded by a mortar shell explosion. Their position was then heavily attacked, preventing any further movement that day.

On July 17, Captain Puntenney requested artillery and air support to disperse the German troops. Short of munitions, still at the crossroads of the Madeleine, they find themselves at a mine depot, abandoned by the Germans. Meanwhile, the 115th passed through La Luzerne, deploying at the bottom of the Dollée Valley. On July 18, a company from the 116th established position along the Madeleine and the Germans retreated west to Rampan. An operations group is placed under the direction of General Norman Cota to form Task Force C. Around 3:00 PM, the tanks along the road to Isigny were followed by ranks of soldiers. They arrived in the Bascule district of Saint-Lô, near the Saint-Croix (Holy Cross) church.

When Major Howie died of wounds suffered from a mortar explosion, room was needed in the ambulance for the living wounded, and his body was placed on the hood of the lead jeep, symbolically making him the first American soldier to enter the city. His body was then placed on some rubble and draped in a flag, in a photo that was widely circulated. Andy Rooney, who witnessed the event as a Stars and Stripes reporter, called this "one of the truly heartwarming and emotional scenes of a gruesome and frightful war". 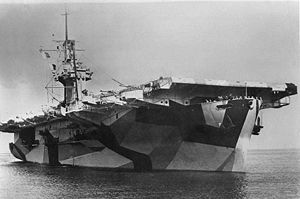 In memory of this battle, the name of Saint-Lô was given to an escort carrier of the United States Navy on October 10, 1944, the USS St. Lo (CVE-63). The ship suffered a dismal fate: after entering service as the Chapin Bay on October 23, 1943, it was sunk just a year later, on October 25, 1944, during the Battle of Leyte Gulf, by a kamikaze attack.

In 1946, Samuel Beckett wrote a piece of reportage called The Capital of the Ruins, in which he referred to the city as having been "bombed out of existence in one night". On 2 June 1948, the city was decorated with both the Legion of Honour and the Croix de Guerre.[3]

A monument to Major Howie, the "Major of St-Lô", was erected in the city (see photo on the right), near the cemetery.