The Soviet Union and Japan maintained a fairly scrupulous neutrality toward each other after signing the Soviet–Japanese Neutrality Pact on 13 April 1941, although the two countries were allied with one another's World War II enemies from 1941 until the conclusion of the war in 1945.[2] The Soviet Union turned down requests by the United States to base American aircraft on Soviet territory for operations against Japan and ignored Allied requests for any actions which might provoke Japan. Josef Stalin said that the Soviet entry into the war against Japan would not be possible until after a three-month period following Germany's defeat,[3] per an assurance he offered to the United States Ambassador to the Soviet Union, W. Averell Harriman, at an October 1944 meeting. Stalin further stipulated as part of the agreement that it would include the Allies providing substantial assistance to the Soviet Union in building up its armed forces and military supplies in East Asia and the Pacific in advance of any Soviet operations against Japan. The United States soon began the work of meeting the Soviet requirements outside of and in addition to annual Lend-Lease allotments of aid to the Soviets,[4] including the transfer of a dozen types of ships and aircraft from the United States to the Soviet armed forces. In the spring and summer of 1945, the United States secretly transferred 149 ships and craft – mostly escort vessels, landing craft, and minesweepers – to the Soviet Navy at Cold Bay in the Territory of Alaska in Project Hula.[4] Even so, cooperation between the Soviets and Americans was minimal and in August 1945 the Soviets did not have the capability to mount a major sea-borne invasion of Japanese-held territory.[5]

As Stalin had promised, the Soviet Union declared war against Japan on 8 August 1945, exactly three months after the capitulation of Germany, and began an offensive against Japanese forces in Northeast Asia the next day. During August, Soviet forces attacked Japanese forces in the puppet state of Manchukuo in Manchuria, in the Japanese province of Karafuto on the southern half of Sakhalin Island, and the northern half of Korea, a Japanese possession at the time. Another Soviet goal during the offensive was the occupation of the Kuril Islands.[6]

On 15 August 1945, the commander-in-chief of Soviet armed forces in the Soviet Far East, Marshal of the Soviet Union Aleksandr M. Vasilevsky, ordered the commander of the Soviet Army's Second Far Eastern Front, General Maksim A. Purkayev, and the commander of the Soviet Navy's Pacific Ocean Fleet, Admiral Ivan S. Yumashev, to take the first step in the conquest of the Kuril Islands by occupying the islands of Shumshu and Paramushiro at the northern end of the archipelago, just off the southern tip of the Soviet Union's Kamchatka Peninsula. Soviet forces first were to take Shumshu, then Paramushiro; with these two islands under control, the rest of the island chain, which was only lightly held, would fall easily.[7]

Purkayev and Yumashev placed the commander of the Soviet Army's Kamchatka Defense Zone, General A. R. Gnechko, and the commander of the naval base at Petropavlovsk-Kamchatsky, Captain 1st Rank Dmitri G. Ponomarev, in charge of the Shumshu operation, with Gnechko in overall command. Gnechko and Pomomarev had orders to assemble an assault force from forces locally available on the Kamchatka Peninsula and land on Shumshu within 48 hours.[7] 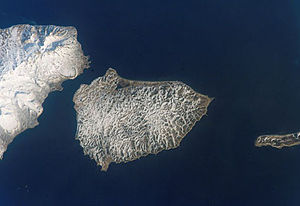 A Landsat 7 image of Shumshu. The northern tip of Paramushir (formerly Paramushiro) is at left. The First Kuril Strait lies across the upper portion of the image.

The Imperial Japanese Army's 91st Infantry Division garrisoned both Shumshu and nearby Paramushiro, with about 8,500 troops on Shumshu and 15,000 more troops on Paramushiro. The garrisons were able to reinforce one another if necessary. The Japanese fielded 77 tanks. Against this force, Gnechko was able to field two reinforced Soviet Army rifle divisions and a Soviet Naval Infantry battalion with a combined total of 8,824 officers and men and a naval task force of 64 small ships and craft to carry them to Shumshu. The Soviets had no tanks and no major warships to commit to the operation, but enjoyed an advantage in artillery and mortars.[8]

Gnechko and Ponomarev assessed the challenging schedule, concluding that the movement of a force over the 170 nautical miles (315 km) from Petropavlovsk-Kamchatsky to Shumshu in the world's foggiest waters would itself take 24 hours, leaving them only 24 hours to assemble an assault force if they were to meet the requirement to land on Shumshu by the evening of 17 August 1945 as ordered. Gnechko requested and received a 24-hour postponement, which moved the landing requirement to no later than the evening of 18 August 1945.[8]

Although Soviet intelligence reports indicated that the Japanese troops on Shumshu were demoralized by Japanese Emperor Hirohito's announcement on 15 August 1945 that Japan intended to surrender, Gnechko believed that the Japanese advantage in numbers could put the operation in jeopardy. Chronically poor weather in the area limited the ability of Soviet aircraft to conduct reconnaissance or provide support to a landing, but they were tasked to attack Paramushiro's naval base to interdict Japanese reinforcements attempting to reach Shumshu.[1]

Gnechko also feared that his force lacked sufficient artillery and naval gunfire support for its initial landing. The ships of the landing force had few large guns – the largest of them, the minesweeper Okhotsk, had only one 130-mm (5.1-inch) and two 76.2-mm (3-inch) guns – and he doubted the Soviet Navy's ability to provide enough gunfire support to counter Japanese coastal artillery; moreover he and Ponomarev doubted the ability of the small ships available to remain on station and provide effective shore bombardment while both under fire from Japanese coastal batteries and fighting strong currents in the First Kuril Strait.[8]

Gnechko planned to rely on four 130-mm (5.1-inch) guns on Cape Lopatka on the southern tip of the Kamchatka Peninsula to provide additional artillery support by firing 12 km (7.5 statute miles) across the First Kuril Strait against targets on Shumshu, but saw it as critical that Soviet infantry quickly establish a beachhead deep and secure enough to allow Soviet ships to unload artillery and mortars at Shumshu itself; he believed that only then would the Soviet advantage in artillery begin to express itself. However, the Soviet ground forces to be committed had little or no experience in amphibious warfare and little time for familiarization with Shumshu itself, and this, too, threatened the Soviet ability to establish the necessary beachhead. Gnechko hoped that by focusing the landing force in a concentrated attack on a small area, he could overcome these difficulties and establish a secure beachhead on which the Soviets could deploy artillery and mortars quickly.[1]

On the Japanese side, the 91st Infantry Division did not expect a Soviet attack. However, the Kurils had been a Japanese possession since 1875, and Japanese forces had garrisoned them throughout World War II, giving them great familiarity with the terrain. Nearby Paramushiro had been the major Japanese base in the North Pacific during the war, and Japanese coastal artillery was sited to defend against amphibious assaults on Shumshu. Japanese forces fighting the Soviets elsewhere in Northeast Asia had demonstrated an ability to put up a spirited defense, despite Japan's announced intention to surrender and the cessation of hostilities with the other Allies as of 15 August 1945.[7]

File:USS LCI(L)-551.jpg
The large infantry landing craft USS LCI(L)-551 in May 1945, flying her colors at half-mast in honor of the recently deceased President Franklin D. Roosevelt. Transferred to the Soviet Navy at Cold Bay, Territory of Alaska, on 29 July 1945 in Project Hula, she became DS-48 and took part in the Soviet invasion of the Kuril Islands, in which Japanese coastal artillery destroyed five of her sister ships during the 18 August 1945 Shumshu landings. The Soviet Union returned her to the United States in 1955.[9]

The Soviet landing force left Petropavlovsk-Kamchatsky at 0500 on 17 August 1945 and, after a 21-hour voyage, arrived in the First Kuril Strait at 0200 on 18 August 1945 and took up positions for the landings on Shumshu. The first wave of about 1,000 naval infantrymen went ashore at 0430 on 18 August 1945. Completely surprised, the Japanese mounted a disorganized defense, but the Soviets were unable to exploit this properly; inexperienced in amphibious landings, the naval infantrymen indulged in uncoordinated advances inland instead of focusing on the primary objective of establishing a secure beachhead of sufficient depth to bring artillery and mortars ashore. By 0530, the Japanese had manned machine guns in pillboxes and foxholes and begun to inflict heavy casualties on the Soviets. The Soviets also took too long to begin their assaults against Japanese coastal artillery positions, which the Japanese defended fiercely. At 0600, some Soviet units of the first wave finally attempted an attack on the Japanese batteries on Cape Kokutan, but were too outnumbered to breach the defenses. The Soviets held off a Japanese counterattack by infantry and 20 tanks, destroying 15 of the tanks, and then charged up the heights toward the artillery sites, but were repulsed near the top.[1]

At 0910, Soviet forces on Shumshu – badly in need of reinforcements and supplies – finally established radio contact with the ships offshore and with the four guns on Cape Lopatka. The gunfire from Cape Lopatka was particularly effective, and the Soviet troops held out against repeated Japanese counterattacks. By the afternoon, with the weather improving, Soviet aircraft began to attack the naval base on Paramushiro to prevent Japanese reinforcements from reaching Shumshu, and the Soviets had established good communications between their troops ashore, gunfire support ships, and Soviet aircraft, which combined to inflict heavy casualties on counterattacking Japanese. By the evening of 18 August 1945, the Soviets had established a beachhead 4 km (2.5 miles) wide and 5 to 6 km (3.1 to 3.75 miles) deep and had managed to bring artillery and mortars ashore.[10]

Conclusion of the operation

In a series of attacks during the night of 18–19 August 1945, the Soviets wiped out most of the defenses of the Japanese shore batteries, and Gnechko made plans to bring all Japanese resistance on Shumshu to an end on 19 August. Soviet heavy artillery came ashore on the morning of 19 August, and small groups of Japanese began to surrender. At 0900, a Japanese envoy informed the Soviets that the 91st Infantry Division had received orders from higher command to cease hostilities at 1600.[10]

Japanese forces on Shumshu, Paramushiro, and Onekotan signed an unconditional surrender agreement at 1800 on 19 August 1945. However, fighting on Shumshu continued to flare up until 23 August 1945, when the last Japanese on the island finally surrendered.[10]

The Battle of Shumshu was the only battle between the Soviets and Japanese in August–September 1945 in which Soviet casualties exceeded those of the Japanese. The Soviets suffered 1,567 casualties – 516 killed or missing and another 1,051 wounded – and the loss of five landing ships, while Japanese casualties totaled 1,018 – 256 killed and another 762 wounded.[10] Soviet officers later often said that the operation demonstrated the difficulty of amphibious invasions of enemy territory and Soviet shortfalls and inexperience in amphibious warfare, and cited the Soviet experience on Shumshu as a reason for not invading the island of Hokkaido in the Japanese Home Islands.[11][12]

With Shumshu and Paramushiro under Soviet control, the rest of the Kuril Island chain, much more lightly held by Japanese forces, fell to Soviet forces easily. The Soviets completed their occupation of the Kurils on 5 September 1945.[13]