The First Battle of Smolensk was a large scale battle during the opening stage of Operation Barbarossa in World War II, the German invasion of the Soviet Union. It took place in the region around the city of Smolensk between 10 July and 10 September 1941, about 400 km west of Moscow. At that point the Wehrmacht had advanced 500 km into the USSR in the mere 18 days that had elapsed since the start of the invasion on 22 June 1941. During the battle the German army encountered unexpected resistance, leading to a severe delay in their advance on Moscow.

Ultimately, three Soviet armies (the 16th, 19th and the 20th army) were encircled and destroyed just to the south of Smolensk, though significant numbers from the 19th and 20th managed to escape the pocket. Some historians have asserted, that the losses in terms of men and materiel incurred by the Wehrmacht during this drawn-out battle together with the 2-month delay in the march towards Moscow were decisive for the Wehrmacht's defeat by the Red Army at the end of the Battle of Moscow three months later in December 1941.

On 22 June 1941, Axis nations invaded the Soviet Union in Operation Barbarossa. During the opening phase, the campaign met with spectacular gains, as the surprised Soviet troops were not able to offer coordinated resistance. After 3 weeks of fighting, the Germans had reached the Dvina and Dnieper Rivers and planned for a resumption of the offensive effort. The main effort, targeted towards Moscow, was carried out by Army Group Centre commanded by Fedor von Bock. Its next target on the way to the Soviet capital was the town of Smolensk. The German plan called for the 2nd Panzer Group (later 2nd Panzer Army) to cross the Dnieper, closing on Smolensk from the south, while the 3rd Panzer Group (later 3rd Panzer Army) was to encircle the town from the north.[6]

After their initial defeats, the Red Army sought to reorganise itself and established several measures to ensure a more determined resistance. A new defensive line was established around Smolensk. Stalin placed Field Marshal Timoshenko in command, and transferred five armies out of the strategic reserve to Timoshenko's control. These armies had to conduct a series of counteroffensives to blunt the German offensive. The German high command was not aware of the Soviet build-up until they encountered them on the battlefield.[6][7]

Facing the Germans along the Dnieper and Dvina rivers were stretches of the Stalin Line fortifications. The defenders were the 13th Army of the Western Front, and the 20th Army, 21st Army, and the 22nd Army of the Soviet Supreme Command (Stavka) Reserve. Another army, the 19th Army, was forming up at Vitebsk, while the 16th Army was arriving at Smolensk.[8][9]

In Soviet historiography, the Battle of Smolensk (actually a full campaign) would take place in several phases, divided into distinct operations to halt the German offensive and the pincers. 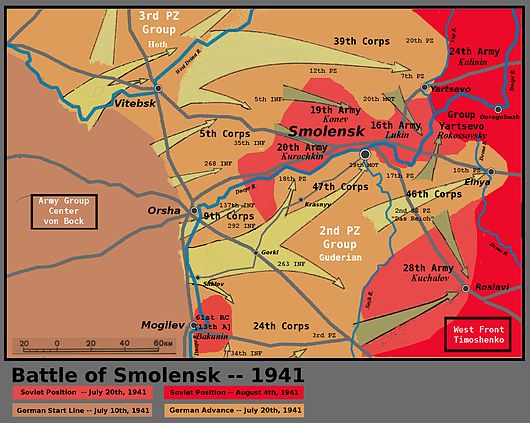 Prior to the German attack, the Soviets launched their counter-offensive. On 6 July, the Soviet 20th Army's 7th and 5th Mechanized Corps launched an attack with about 1,500 tanks near Lepiel. The result was a disaster, as the offensive ran directly into the anti-tank defenses of the German 7th Panzer Division and the two Soviet mechanized corps were virtually wiped out.[10][note]

On 10 July, the Germans started their own offensive, when Guderian's 2nd Panzer Group launched its surprise attack over the Dnieper. His forces literally overran the weak 13th Army, which opposed his forces. By 13 July, Guderian had passed Mogilev, trapping several Soviet divisions there. His spearhead unit, the 29th Mot. Division, was already 18 km (11 mi) short of Smolensk. Meanwhile, 3rd Panzer Group had also launched its offensive, with 20th Panzer Division establishing a bridgehead on the eastern bank of the Dvina river, threatening Vitebsk. As both German Panzer Groups drove east, three Soviet Armies the 16th, 19th and 20th faced the prospect of encirclement around Smolensk. From 11 July on, the Soviets tried a series of concerted counterattacks. The Soviet 19th Army and 20th Army struck at Vitebsk, while the 21st and the remnants of the 3rd Army attacked against the southern flank of 2nd Panzer Group near Bobruisk.[8]

At the same time, several other Soviet armies also attempted to counterattack in the sectors of German Army Group North and South. This effort was apparently part of an overall attempt to implement the Soviet prewar general defense plan. However, although the Soviet attacks managed to slow the Germans down, their results were so marginal that the Germans barely noticed them as a coordinated large-scale defensive effort. The German offensive therefore continued.[11]

Meanwhile, Hoth's 3rd Panzer Group drove north and then east, parallel to Guderian's forces, and taking Polotsk and Vitebsk. The 7th Panzer Division and 20th Panzer Division reached the area east of Smolensk at Yartsevo on July 15. At the same time, Guderian's 29th Motorized, heavily supported by the 17th Panzer Division broke into Smolensk and cleared most of the city but for the suburbs, precipitating a week of heavy house-to-house fighting due to repeated efforts by Lukin's 16th Army to recapture it. Guderian expected that the offensive would continue towards Moscow as its main focus, and therefore sent the 10th Panzer Division to the Desna River to establish a bridgehead on the eastern side of it at Yelnya, and cleared that as well by the 20th. This advanced bridgehead became the center of the Yelnya Offensive, one of the first large scale coordinated Soviet counter-offensives of the war.[12]

This objective was 50 km south of the Dnepr river, and therefore well clear of the objective of liquidating the armies trapped at Smolensk. Under Fuhrer Directive 33 issued on July 14 the main effort of the Wehrmacht was being re-oriented away from an immediate attack on Moscow and south toward a deep encirclement of Kiev in Ukraine and von Bock was becoming impatient, wanting Guderian to strike north and link up with Hoth's Panzer Group so resistance in the city could be mopped up.[12][13] 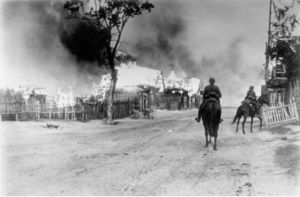 German troops in a town near Mogilev at the Dnieper

In the north, 3rd Panzer Group was moving much more slowly. The terrain was swampy, rain was still a problem, and the Soviets were fighting desperately to escape the trap that was developing. On 18 July, the armored pincers of the two German Panzer Groups came within 16 km (9.9 mi) of closing the gap. However, Timoshenko put newly promoted Konstantin Rokossovsky, who had just arrived from the Ukrainian front, in charge of assembling a stopgap force, which stopped the 7th Panzer's advance and was continuously reinforced, temporarily stabilizing the situation. The open gap allowed a number of Soviet units to escape that were then pressed into service, holding the gap open.[12]

The Soviets transferred additional troops from newly formed armies into the region around Smolensk, namely the 29th, 30th, 28th, and 24th Armies. These newly built formations would, immediately upon arrival, start a heavy counterattack against the German forces around the Smolensk area from 21 July on. This put a heavy strain on the overextended Panzer forces, which had to cover a large area around the perimeter. However, poor coordination and logistics on the part of the Soviets allowed the Germans to successfully defend against these offensive efforts, while continuing to close the encirclement. The Soviet attacks would last until 30 July, when the Germans finally repelled the last of them.[12][13]

Finally, on 27 July, the Germans were able to link up and close the pocket east of Smolensk, trapping large portions of 16th, 19th, and 20th Armies. However, under the leadership of 20th Army, significant Soviet troops managed to break out of the pocket in a determined effort a few days later, assisted by the ongoing Soviet offensive efforts along the Smolensk front line. In the end, about 300,000 men were taken prisoner when the encirclement was subsequently reestablished and the pocket eliminated.[14][4][15]

The Battle of Smolensk was another severe defeat for the Soviets in the opening phase of Operation Barbarossa. However, this Axis victory did not come without strategic implications. For the first time, the Soviets tried to implement a determined coordinated counterattack against a large part of the front, although the counterattack was almost entirely a failure. Nevertheless, the increasing resistance showed that the Soviets were not yet defeated, and that the Blitzkrieg towards Moscow was not going to be an easy task. This exacerbated a division between the German high command and political leadership. The leaders of the General Staff, Franz Halder and Walter von Brauchitsch, and frontline commanders like von Bock, Hoth, and Guderian counseled against dispersing the German armored units and to focus directly on Moscow. Hitler reiterated the lack of importance of Moscow and strategic encirclements, and ordered a concentration on economic targets such as Ukraine, the Donets Basin, and the Caucasus, and more tactical encirclements to weaken the Soviets further. As a result, the German offensive effort became more fragmented, leading to the battles at Kiev and Uman. Those battles were also German victories, but also cost them vital time, men, and material on their approach towards Moscow, allowing the Soviets time to prepare the defenses of the city.[16][17][18][19][13]