The Battle of Sokolovo took place on March 8 and 9, 1943, near the town of Sokolovo near Kharkiv in Ukraine when the on-going attack of the Wehrmacht was delayed by joint Soviet and Czechoslovak forces. It was the first time that a foreign military unit, the First Czechoslovak Independent Field Battalion, fought together with the Red Army. Under the command of Ludvík Svoboda, later President of Czechoslovakia during the Soviet-led intervention in August 1968, the Czechoslovak soldiers delayed the advance of Germans to the Mzha river. On March 13, the position was abandoned as untenable due to the complete German encirclement of Kharkov.

The Soviet supreme command highly valued both the bravery of the Czechoslovak soldiers and the political significance of the fact that the Soviet people were no longer alone in their struggle against Germany. First Lieutenant Otakar Jaroš, the commander of the 1st company (who was killed in the course of the battle and posthumously promoted to captain) was the first foreign citizen ever to be awarded the highest Soviet military order, the Hero of the Soviet Union. Moreover, one of the local schools in Sokolovo was named in his honor.

The battle became the subject matter of a 1974 Czechoslovak film with the same name, directed by Otakar Vávra. 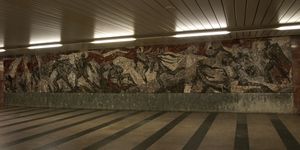 Mosaic conmemorating the battle in the Florenc Station of Prague's Metro