Battle of the Seelow Heights

The Battle of the Seelow Heights (German: Schlacht um die Seelower Höhen) was part of the Seelow-Berlin Offensive Operation (16 April-2 May 1945), one of the last assaults on large entrenched defensive positions of the Second World War. It was fought over three days, from 16–19 April 1945. Close to one million Soviet soldiers of the 1st Belorussian Front (including 78,556 soldiers of the Polish 1st Army), commanded by Marshal Georgi Zhukov, attacked the position known as the "Gates of Berlin". They were opposed by about 110,000 soldiers of the German 9th Army,[4] commanded by General Theodor Busse, as part of the Army Group Vistula.

The result was the encirclement of the German 9th Army and the Battle of Halbe.

The 1st Belorussian Front had nine regular and two tank armies consisting of 77 rifle divisions, two cavalry, five tank and two mechanized corps, eight artillery and one guards mortars divisions and a mixture of other artillery and rocket launcher brigades. The front had 3,059 tanks and self-propelled guns and 18,934 artillery pieces and mortars.[6] Eight of the 11 armies were posted along the Oder. In the north, the 61st Army and the 1st Polish Army held the river line from Schwedt to its meeting with the Finow Canal. On the Soviet bridgehead at Küstrin, the 47th Army, 3rd and 5th Shock armies, and the 8th Guards Army were concentrated for the attack. The 69th Army and 33rd Army covered the river line south to Guben. The 1st Guards and 2nd Guards Tank armies and the 3rd Army were in reserve. The 5th Shock and 8th Guards were posted directly opposite the strongest part of the defences, where the Berlin autobahn passed through the heights.[7]

The German 9th Army held the front from about the Finow Canal to Guben, an area which included the Seelow Heights. It had 14 divisions, the "Fortress" (Festung) Frankfurt, 587 tanks (512 operable, 55 in repair, 20 in transit) and 2,625 artillery pieces (including 695 anti-aircraft guns).[8] Further south, the front was held by the 4th Panzerarmee, which opposed the 1st Ukrainian Front.

General Gotthard Heinrici replaced Heinrich Himmler as commander of Army Group Vistula on 20 March. He correctly predicted that the main Soviet thrust would be made over the River Oder and along the main east-west autobahn at Seelow Heights. He decided to defend the riverbank with only a light skirmishing screen, but to strongly fortify the Seelow Heights, which rise about 48 m (157 ft) above the Oder and overlook the river where the autobahn crossed it. He thinned out the line in other areas to put more men at the heights. The Oder's floodplain was already saturated by the spring thaw, but German engineers also released water from a reservoir upstream, which turned the plain into a swamp. Behind the heights, they built three lines of defences, spreading back toward Berlin. The last was the Wotan Line, 10–15 mi (16–24 km) behind the front line. These lines consisted of anti-tank ditches, anti-tank gun emplacements, and an extensive network of trenches and bunkers.[9][10] 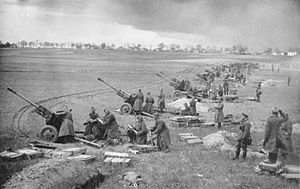 In the early hours of 16 April, the offensive began with a massive bombardment by thousands of artillery pieces and Katyushas. Well before dawn, the 1st Belorussian Front attacked across the Oder and the 1st Ukrainian Front attacked across the Neisse. The 1st Belorussian Front was the stronger force, but it had the more difficult assignment since it was facing the bulk of the German forces.[11][12]

The assault by the 1st Belorussian Front started with an intense artillery bombardment. According to Beevor and Ziemke, Heinrici and Busse had anticipated the attack and withdrew their defenders from the first line of trenches just before the Soviet artillery would have obliterated them. However, this is contradicted by a report to Stalin, in which Zhukov writes that:

Considering that the enemy moves its infantry from the first to the second and third lines of trenches in the morning, I used a nightly artillery barrage with a high density of fire for 30 minutes, with the use of searchlights to blind the enemy and light up the terrain ahead of the advancing troops... According to the interrogated prisoners, artillery fire was so sudden and overwhelming that the enemy did not have time to move from the first trench line; the second and third lines were at all times under heavy fire from our artillery. As a result of this, the enemy units in the first line of defence suffered heavy casualties.[13]

The swampy ground proved to be a great hindrance, and a German counter-barrage caused heavy Soviet casualties. Frustrated by the slow advance, Zhukov threw in his reserves, which according to his earlier plan were to be held back until the expected breakthrough. By early evening, an advance of 4–6 km (2.5–3.7 mi) had been achieved (the 77th Rifle Corps from the 3rd Shock Army had advanced 8 km (5.0 mi)), but the second German defensive line remained intact. Zhukov was forced to report that his battle was not going as planned. However, in the south the attack by Konev's 1st Ukrainian Front was going according to plan. To spur Zhukov on, Stalin told him that he let Konev direct his tank armies north towards Berlin.[14][15]

On the second day, the 1st Belorussian Front's troops continued to advance in accordance with the initial plan. By nightfall on 17 April, the German second defensive line (Stein Stellung) was broken by the 5th Shock Army and 2nd Guards Tank Army. The right flank of the 4th Guards Rifle Corps of the 8th Guards Army, together with the 11th Tank Corps of the 1st Guards Tank Army, had taken advantage of the success of their comrades and also advanced. The 47th and the 3rd shock armies progressed another 4–8 km (2.5–5.0 mi).

To the south however, the 1st Ukrainian Front was pushing back the 4th Panzer Army; the left flank of Army Group Centre under Ferdinand Schörner was beginning to crumble. Schörner kept his two reserve panzer divisions in the south covering his centre, instead of using them to shore up the 4th Panzer Army. This was the turning point in the Berlin Offensive, because the positions of both Army Group Vistula and the centre and right sectors of Army Group Centre were becoming untenable. Unless they fell back in line with the 4th Panzer Army, they faced envelopment. In effect, Konev's successful attack on Schörner's relatively poor defences to the south of Seelow Heights was unhinging Heinrici's defence.

On 18 April, both Soviet fronts advanced with heavy losses. The Seelow Heights was bypassed from the north, during which Soviet troops met counterattacks by German reserves: 11th SS Panzergrenadier Division Nordland, 23rd SS Panzergrenadier Division Nederland and SS-Panzer Abteilung 103 (503rd). By nightfall, an advance of 3–5 km (1.9–3.1 mi) on the right flank and 3–8 km (1.9–5.0 mi) in the centre had been achieved, and the 1st Belorussian Front had reached the third and final German line of defence.

On 19 April, the 1st Belorussian Front eventually broke through the final line of the Seelow Heights and now nothing but broken German formations lay between them and Berlin. The remnants of the 9th Army and the 4th Panzer Army were enveloped by the 1st Belorussian Front and by elements of the 1st Ukrainian Front which had broken through and turned north. Other armies of the 1st Ukrainian Front raced west towards the Americans. By the close of 19 April, the German Eastern Frontline had effectively ceased to exist. All that remained were pockets of resistance.[16]

The defensive line on the Seelow Heights was the last major defensive line outside Berlin. General Heinrici had said before the battle that the Seelow Heights could be held for only three or four days without reinforcements, which he did not have. From 19 April, the road to Berlin—90 km (56 mi) to the west—lay open. By 23 April, Berlin was fully encircled and the Battle in Berlin entered its last stage. Within two weeks, Adolf Hitler was dead and the war in Europe was effectively over.

As a result of the 1st Belorussian Front's success at the Seelow Heights and the Oder Front in general, most of the forces of the German 9th Army were encircled before they could retreat to Berlin. The city was then defended by broken formations, the Volkssturm, police and air defence units, which allowed the Soviet Army to take it in only 10 days.[1][17]

After the war, Zhukov's critics asserted that he should have stopped the 1st Belorussian Front's attack via the direct line to Berlin along the autobahn and instead made use of the 1st Ukrainian Front's breakthrough over the Neisse or concentrate its armies on surrounding Berlin from the north. This would have bypassed the strong German defences at Seelow Heights, and avoided many casualties and the delay in the Berlin advance. Zhukov supposedly took the shortest path, so that his troops would be the first ones to enter the city. However, Zhukov chose the main thrust to be through the Seelow Heights not because he thought that was the quickest way to get to Berlin, but because that was the quickest way to link up with Konev's 1st Ukrainian Front and cut off the German 9th Army from the city.[18] Also, bypassing the Seelow Heights and attacking Berlin from the north would have exposed the northern flank of the 1st Belorussian Front to a potential attack from German forces to the north, which could have pinned Zhukov's forces against the Seelow Heights.[19] Furthermore, in actuality only two of the five armies of the 1st Belorussian Front attacked the Seelow Heights themselves and the heights were eventually bypassed from the north as soon as there was a narrow breakthrough.[1][20]

Estimates of Soviet casualties during the assault on the Seelow Heights vary from under 10,000 to over 30,000 killed.[21]