listen); Lower Sorbian: Budyšyn [ˈbudɨʃɨn], Czech: Budyšín [ˈbudɪʃiːn], Polish: Budziszyn [buˈd͡ʑiʂɨn]) is a hill-top town in eastern Saxony, Germany, and administrative centre of the eponymous district. It is located on the Spree River. As of 2013, its population is 39,607. Asteroid 11580 Bautzen is named in honour of the city.

Bautzen is often regarded as the unofficial, but historical capital of Upper Lusatia, and it is the most important cultural centre of the Sorbs, a Slavic people.

The town on the River Spree is situated about 50 km (31 mi) east of Dresden between the Lusatian highland and the lowlands in the north, amidst the region of Upper Lusatia. To the north stretches the Bautzen Reservoir, which was flooded in 1974. This is the former location of the villages of Malsitz (Małšecy) and Nimschütz (Hněwsecy).

Expansion of the urban area

The old part of Bautzen is located on the plateau above the Spree, whose top is marked by the Ortenburg castle. It is bordered by the city walls. The later-built more recent quarters in the east were enclosed by the city ramparts. After their removal, the city expanded further east and to the left bank of the river. However, there has only been a small urban area west of the Spree until today. In the 1970s, the development areas of "Gesundbrunnen" and "Allendeviertel" were erected. After 1990, several neighbouring villages were incorporated. 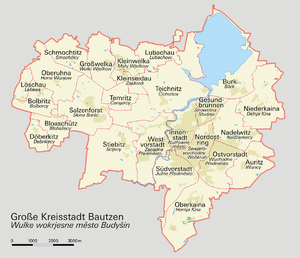 In the 3rd century AD an eastern Germanic settlement existed here, but excavations have proved that the region was already inhabited as early as the late Stone Age. Sorbs arrived in the area during the Migration period in the sixth century AD.

The first written evidence of the existence of the city was in 1002. In 1015 the Polish Army led by Bolesław I Chrobry defeated In 1018 the Peace of Bautzen was signed between the German king Henry II and the Polish prince Boleslaus I. The Treaty left Bautzen (Budziszyn in modern Polish) under Polish rule. In 1032 the city passed to the Holy Roman Empire, in 1319 to Czech Crown lands and in 1635 to Saxony.

During the Middle Ages it was a member of the Six Cities' Alliance of the Upper Lusatian cities of Görlitz, Zittau, Löbau, Kamenz, Lauban and Bautzen.

It was the site of one of the battlefields of the Napoleonic War Battle of Bautzen in 1813.

In 1839 the Sorbian student organization Societas Slavica Budissenensis was founded in the city. The Sorbian House (Upper Sorbian: Serbski Dom), a Sorbian cultural centre, was opened in the city in 1904.

During World War II and the Nazi era, there was a subcamp of the Groß-Rosen concentration camp in Bautzen. Ernst Thälmann was imprisoned there before being deported to Buchenwald. Between 21 April and 30 April 1945, the Battle of Bautzen was fought. 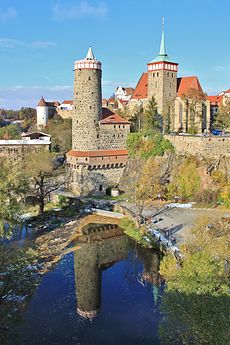 Bautzen has a very compact and well preserved medieval town centre with numerous churches and towers and a city wall on the steep embankment to the river Spree, with one of the oldest preserved waterworks in central Europe (built 1558).

Sites of interest include:

There are four museums including the Stadtmuseum Bautzen ("Bautzen city Museum") and the Sorbisches Museum ("Sorbian Museum", Sorbian: Serbski muzej). 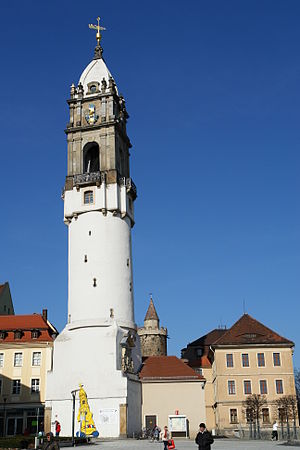 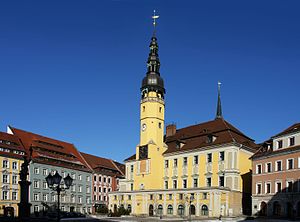 Bautzen is twinned with: