The Bay of Campeche (Spanish: Bahia de Campeche) is the southern bight of the bodies of water of the Gulf of Mexico. It is surrounded on three sides by the Mexican states of Campeche, Tabasco and Veracruz. The area of the bay is 6,000 square miles (16,000 km2) and maximum depth of the bay is approximately 180 feet (55 m). It was named by Francisco Hernández de Córdoba and Antón de Alaminos during their expedition in 1517.

The Cantarell Complex of five oil fields lies beneath the Bay of Campeche. In 2003 it was the second most productive oil field in the world, then supplying about two thirds of Mexico's crude oil output, but it went into a steep decline soon thereafter.

On June 3, 1979, Ixtoc I, an exploratory oil well located in the bay, suffered a blowout that caused a catastrophic explosion, resulting in what has been ranked as the third largest unintentional oil spill in history. 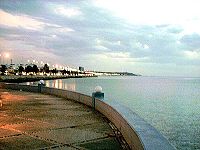 During the months of June and July, the Bay of Campeche is considered one of the "hot" breeding spots for Atlantic hurricanes.[1] The bay is also considered the eastern border on the main migration routes for birds in the Americas.[2]