Bayezid II or Sultân Bayezid-î Velî (3 December 1447 – 26 May 1512) (Ottoman Turkish: بايزيد ثانى Bāyezīd-i sānī, Turkish:II. Bayezid or II. Beyazıt) was the eldest son and successor of Mehmed II, ruling as Sultan of the Ottoman Empire from 1481 to 1512. During his reign, Bayezid II consolidated the Ottoman Empire and thwarted a Safavid rebellion soon before abdicating his throne to his son, Selim I. He is most notable for evacuating Jews from Spain after the proclamation of the Alhambra Decree and resettling them throughout the Ottoman Empire.

Bayezid II married Gülbahar Hatun, who was the mother of Bayezid II's successor, Selim I and nephew of Sitti Mükrime Hatun.

Fight for the throne

Bayezid II's overriding concern was the quarrel with his brother Cem, who claimed the throne and sought military backing from the Mamluks in Egypt. Having been defeated by his brother's armies, Cem sought protection from the Knights of St. John in Rhodes. Eventually, the Knights handed Cem over to Pope Innocent VIII (1484–1492). The Pope thought of using Cem as a tool to drive the Turks out of Europe, but as the papal crusade failed to come to fruition, Cem was left to languish and die in a Neapolitan prison.[citation needed] Bayezid II paid both the Knights Hospitaller and the pope to keep his brother prisoner.

Bayezid II ascended the Ottoman throne in 1481.[5] Like his father, Bayezid II was a patron of western and eastern culture. Unlike many other Sultans, he worked hard to ensure a smooth running of domestic politics, which earned him the epithet of "the Just". Throughout his reign, Bayezid II engaged in numerous campaigns to conquer the Venetian possessions in Morea, accurately defining this region as the key to future Ottoman naval power in the Eastern Mediterranean. The last of these wars ended in 1501 with Bayezid II in control of the whole Peloponnese. Rebellions in the east, such as that of the Qizilbash, plagued much of Bayezid II's reign and were often backed by the Shah of Persia, Ismail, who was eager to promote Shi'ism to undermine the authority of the Ottoman state. Ottoman authority in Anatolia was indeed seriously threatened during this period and at one point Bayezid II's grand vizier, Ali Pasha, was killed in battle against rebels.

In July 1492, the new state of Spain expelled its Jewish and Muslim populations as part of the Spanish Inquisition. Bayezid II sent out the Ottoman Navy under the command of Admiral Kemal Reis to Spain in 1492 in order to evacuate them safely to Ottoman lands. He sent out proclamations throughout the empire that the refugees were to be welcomed.[6] He granted the refugees the permission to settle in the Ottoman Empire and become Ottoman citizens. He ridiculed the conduct of Ferdinand II of Aragon and Isabella I of Castile in expelling a class of people so useful to their subjects. "You venture to call Ferdinand a wise ruler," he said to his courtiers, "he who has impoverished his own country and enriched mine!"[7] Bayezid addressed a firman to all the governors of his European provinces, ordering them not only to refrain from repelling the Spanish refugees, but to give them a friendly and welcome reception.[7] He threatened with death all those who treated the Jews harshly or refused them admission into the empire. Moses Capsali, who probably helped to arouse the sultan's friendship for the Jews, was most energetic in his assistance to the exiles. He made a tour of the communities and was instrumental in imposing a tax upon the rich, to ransom the Jewish victims of the persecution. 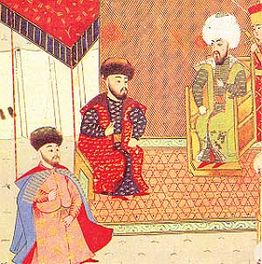 The Muslims and Jews of al-Andalus (Iberia) contributed much to the rising power of the Ottoman Empire by introducing new ideas, methods and craftsmanship. The first printing press in Constantinople was established by the Sephardic Jews in 1493. It is reported that under Bayezid's reign, Jews enjoyed a period of cultural flourishing, with the presence of such scholars as the Talmudist and scientist Mordecai Comtino; astronomer and poet Solomon ben Elijah Sharbiṭ ha-Zahab; Shabbethai ben Malkiel Cohen, and the liturgical poet Menahem Tamar.

On September 14, 1509, Constantinople[8][9] was devastated by an earthquake. During Bayezid II's final years, a succession battle developed between his sons Selim I and Ahmet. Ahmet unexpectedly captured Karaman, an Ottoman city, and began marching to Constantinople to exploit his triumph. Fearing for his safety, Selim staged a revolt in Thrace but was defeated by Bayezid and forced to flee back to the Crimean Peninsula. Bayezid II developed fears that Ahmet might in turn kill him to gain the throne, so he refused to allow his son to enter Constantinople.

Selim returned from Crimea and, with support from the Janissaries, forced his father to abdicate the throne on April 25, 1512. Bayezid departed for retirement in his native Demotika, but he died on May 26, 1512 at Büyükçekmece before reaching his destination and only a month after his abdication. He was buried next to the Bayezid Mosque in Istanbul. 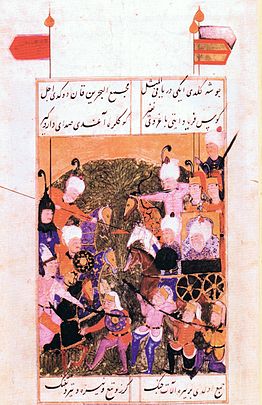 Bayezid II fighting his son Selim I at Uğraşdere. 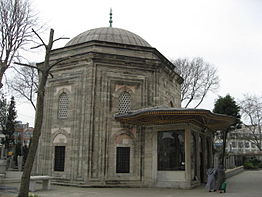 Tomb of Bayezid II in Istanbul.