From Infogalactic: the planetary knowledge core
Jump to: navigation, search
For other uses, see Beacon (disambiguation).

A beacon is an intentionally conspicuous device designed to attract attention to a specific location.

Beacons can also be combined with semaphoric or other indicators to provide important information, such as the status of an airport, by the colour and rotational pattern of its airport beacon, or of pending weather as indicated on a weather beacon mounted at the top of a tall building or similar site. When used in such fashion, beacons can be considered a form of optical telegraphy. 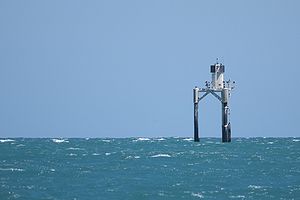 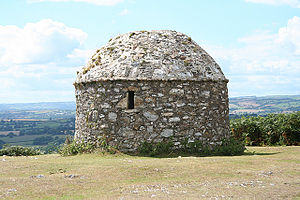 Classically, beacons were fires lit at well-known locations on hills or high places, used either as lighthouses for navigation at sea, or for signalling over land that enemy troops were approaching, in order to alert defenses. As signals, beacons are an ancient form of optical telegraphy, and were part of a relay league.

Systems of this kind have existed for centuries over much of the world. In Scandinavia many hill forts were part of beacon networks to warn against invading pillagers. In Wales, the Brecon Beacons were named for beacons used to warn of approaching English raiders. In England, the most famous examples are the beacons used in Elizabethan England to warn of the approaching Spanish Armada. Many hills in England were named Beacon Hill after such beacons. In the Scottish borders country, a system of beacon fires was at one time established to warn of incursions by the English. Hume and Eggerstone castles and Soltra Edge were part of this network.[1] The Great Wall of China is also a beacon network. In Finland these beacons were called vainovalkeat, "persecution fires", or vartiotulet, "guard fires", and were used to warn Finn settlements of imminent raids by the Vikings. In Spain, the border of Granada in the territory of the Crown of Castile had a complex beacon network to warn against Moorish raiders and military campaigns.[2]

In the 9th century, during the Arab–Byzantine wars, the Byzantine Empire used a beacon system to transmit messages from the border with the Abbasid Caliphate, across Anatolia to the imperial palace in the Byzantine capital, Constantinople. It was devised by Leo the Mathematician for Emperor Theophilos, but either abolished or radically curtailed by Theophilos' son and successor, Michael III.[3] Beacons were later used in Greece as well, while the surviving parts of the beacon system in Anatolia seem to have been reactivated in the 12th century by Emperor Manuel I Komnenos.[3] 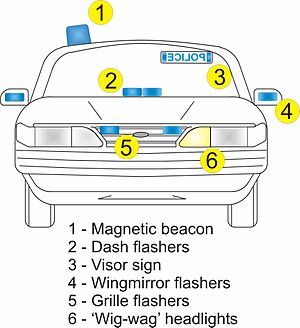 Vehicular beacons are rotating or flashing lights affixed to the top of a vehicle to attract the attention of surrounding vehicles and pedestrians. Emergency vehicles such as fire engines, ambulances, police cars, tow trucks, construction vehicles, and snow-removal vehicles carry beacon lights.

The color of the lamps varies by jurisdiction; typical colors are blue and/or red for police, fire, and medical-emergency vehicles; amber for hazards (slow-moving vehicles, wide loads, tow trucks, security personnel, construction vehicles, etc.); green for volunteer firefighters or for medical personnel, and violet for funerary vehicles. Beacons may be constructed with halogen bulbs similar to those used in vehicle headlamps, xenon flashtubes, or LEDs.[4] Incandescent and xenon light sources require the vehicle’s engine to continue running to ensure that the battery is not depleted when the lights are used for a prolonged period. The low power consumption of LEDs allows the vehicle's engine to remain turned off while the lights operate nodes.

Beacons can be used to trigger actions such as turning on lights when you enter a room and turning them off when exiting a room through communicating to a phone via Bluetooth.[5]

Beacons and bonfires are also used to mark occasions and celebrate events.

Beacons have also allegedly been abused by shipwreckers. An illicit fire at a wrong position would be used to direct a ship against shoals or beaches, so that its cargo could be looted after the ship sank or ran aground. There are, however, no historically substantiated occurrences of such intentional shipwrecking.

In wireless networks, a beacon is a type of frame which is sent by the access point (or wifi router), to indicate that it is on.

Bluetooth based beacons periodically send out a data packet and this could be used by software to identify the beacon location. This is typically used by indoor navigation and positioning applications.

In Aeschylus' tragedy Agamemnon,[6] a chain of eight beacons manned by so-called lampadóphoroi inform Clytemnestra in Argos, within a single night's time, that Troy has just fallen under her husband king Agamemnon's control, after a famous ten years siege.

In J. R. R. Tolkien's high fantasy novel, The Lord of the Rings, a series of beacons alerts the entire realm of Gondor when the kingdom is under attack. These beacon posts were manned by messengers who would carry word of their lighting to either Rohan or Belfalas.[7] In Peter Jackson's film adaptation of the novel, the beacons serve as a connection between the two realms of Rohan and Gondor, alerting one another directly when they require military aid, as opposed to relying on messengers as in the novel.