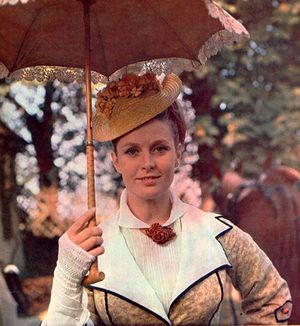 Beata Tyszkiewicz is one of Poland’s quintessentially cinematic beauties, having worked exclusively on the big screen. She became famous through her portrayal of distinguished ladies in costume dramas like Wojciech Has’ The Doll and Andrzej Wajda’s The Ashes. She has worked with leading directors such as Agnieszka Holland, Krzysztof Zanussi, Andre Delvaux and former husband Andrzej Wajda. Tyszkiewicz has appeared in more than 100 films.

She is a jury member on Poland's Dancing with the Stars (aka Taniec z gwiazdami).

Sometimes referred to as First Lady of Polish Cinema. She has aristocratic roots, being the daughter of Count (in Polish Hrabia) Krzysztof Maria Tyszkiewicz and Barbara Rechowicz of the Leliwa coat of arms. She has two daughters: Karolina Wajda (born 29 March 1967, Warsaw), and Wiktoria Padlewska (born 4 October 1977, Warsaw), who is also an actress.[7] In 1998 she received her star on Aleja Gwiazd (Stars Avenue) in Łódź.