In Christian theology, the beatific vision (Latin: visio beatifica) is the ultimate direct self communication of God to the individual person. A person possessing the beatific vision reaches, as a member of redeemed humanity in the communion of saints, perfect salvation in its entirety, i.e. heaven. The notion of vision stresses the intellectual component of salvation, though it encompasses the whole of human experience of joy, happiness coming from seeing God finally face to face and not imperfectly through faith. (1 Cor 13:11–12).[1][2][3]

It is related to the Catholic and Eastern Orthodox belief in theosis,[4][5] and is seen in most – if not all – church denominations as the reward for Christians in the afterlife.[6]

History of the beatific vision 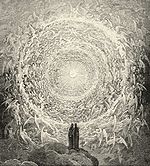 In Christianity, the Bible teaches that God "dwells in unapproachable light, whom no one has even seen or can see" (1 Timothy 6:16), but when God reveals Himself to us in heaven we will then see Him face to face (1 Corinthians 13:12).[7] This concept has been termed "the beatific vision of God" by theologians of the Catholic Church as well as various Protestant denominations, including the Lutheran Church and the Methodist Church.[7][8]

Saint Cyprian wrote of the saved seeing God in the Kingdom of Heaven.

How great will your glory and happiness be, to be allowed to see God, to be honored with sharing the joy of salvation and eternal light with Christ your Lord and God... to delight in the joy of immortality in the Kingdom of Heaven with the righteous and God's friends!

Monsignor Edward A. Pace in the Catholic Encyclopedia (1907) defined the Beatific Vision:

The immediate knowledge of God which the angelic spirits and the souls of the just enjoy in Heaven. It is called "vision" to distinguish it from the mediate knowledge of God which the human mind may attain in the present life. And since in beholding God face to face the created intelligence finds perfect happiness, the vision is termed "beatific."[9]

In Catholic theology, the intercession of saints is valid because those who have died in the Faith are with God in Heaven and enjoy the Beatific Vision, i.e., unmediated access to God's Presence, actually in Paradise itself, seeing God.

Thomas Aquinas defined the beatific vision as the human being's "final end" in which one attains to a perfect happiness. Thomas reasons that one is perfectly happy only when all one's desires are perfectly satisfied, to the degree that happiness could not increase and could not be lost. "Man is not perfectly happy, so long as something remains for him to desire and seek."STh I–II, q., 3, a. 8. But this kind of perfect happiness cannot be found in any physical pleasure, any amount of worldly power, any degree of temporal fame or honor, or indeed in any finite reality. It can only be found in something that is infinite and perfect – and this is God. STh I–II, q. 2, a. 8. And since God is not a material thing but is pure spirit, we are united to God by knowing and loving him. Consequently, the most perfect union with God is the most perfect human happiness and the goal of the whole of the human life. But we cannot attain to this happiness by our own natural powers; it is a gift that must be given us by God, who strengthens us by the "light of glory" so that we can see him as he is, without any intermediary. (Thomas quotes Psalm 35:10 on this point: "In your light we shall see light.")STh I, q. 12, a. 4. Further, since every created image or likeness of God (including even the most perfect "ideas" or "images" of God we might generate in our minds) is necessarily finite, it would thus be infinitely less than God himself.STh I, q. 12, a. 2. The only perfect and infinite good, therefore, is God himself, which is why Aquinas argues that our perfect happiness and final end can only be the direct union with God himself and not with any created image of him. This union comes about by a kind of "seeing" perfectly the divine essence itself, a gift given to our intellects when God joins them directly to himself without any intermediary. And since in seeing this perfect vision of what (and who) God is, we grasp also his perfect goodness, this act of "seeing" is at the same time a perfect act of loving God as the highest and infinite goodness.[10]

According to Aquinas, the Beatific Vision surpasses both faith and reason. Rational knowledge does not fully satisfy humankind's innate desire to know God, since reason is primarily concerned with sensible objects and thus can only infer its conclusions about God indirectly. Summa Theologiae

The theological virtue of faith, too, is incomplete, since Aquinas thinks that it always implies some imperfection in the understanding. The believer does not wish to remain merely on the level of faith but to grasp directly the object of faith, who is God himself. Summa Contra Gentiles

Thus only the fullness of the Beatific Vision satisfies this fundamental desire of the human soul to know God. Quoting St Paul, Aquinas notes "We see now in a glass darkly, but then face to face" (i Cor. 13:12). The Beatific Vision is the final reward for those saints elect by God to partake in and "enjoy the same happiness wherewith God is happy, seeing Him in the way which He sees Himself" in the next life. Summa Contra Gentiles

Pope John XXII (1316–1334) caused a controversy involving the Beatific Vision. He said not as Pope but as a private theologian that the saved do not attain the Beatific Vision until Judgment Day, a view more consistent with soul sleep.[11] The general understanding at the time was that the saved attained Heaven after being purified and before Judgment Day. He never proclaimed his belief as doctrine but rather as an opinion (see ex cathedra, as defined at the First Vatican Council in 1870).

The Sacred College of Cardinals held a consistory on the problem in January 1334, and Pope John backed away from his novel views to the more standard understanding.

His successor, Pope Benedict XII, declared it doctrine that the saved see Heaven (and thus, God) before Judgment Day.

In the philosophy of Plato, the beatific vision is the vision of the Good. In Plato's Allegory of the cave, which appears in the Republic Book 7 (514a – 520a), he writes (speaking, as he does in many of his works, through the character of Socrates):

"My opinion is that in the world of knowledge the idea of good (the Good) appears last of all, and is seen only with an effort; and, when seen, is also inferred to be the universal author of all things beautiful and right, parent of light and of the lord of light in this visible world, and the immediate source of reason and truth in the intellectual." (517b,c)

St. Augustine expressed views similar to Plato's on this subject, and was familiar with Plato's ideas, most likely via Neoplatonist writings.[citation needed]

In the Eleusinian Mysteries

There was a time when with the rest of the happy band they saw beauty shining in brightness – we philosophers following in the train of Zeus, others in company with other gods; and then we beheld the beatific vision and were initiated into a mystery which may be truly called most blessed, celebrated by us in our state of innocence before we had any experience of evils to come, when we were admitted to the sight of apparitions innocent and simple and calm and happy, which we beheld shining in pure light. Phaedrus:250

The Vedic concept of having a visual perception of the gods and goddesses is generically called darshan. The key difference seems to be that one can also have a darshan when a god or goddess appears while the person is living.

The seeing of blue and yellow colors while in samadhi, which is a state of union with the omnipresent Brahman, who is beyond all duality, is also similar to the idea of beatific vision.[citation needed]

Sunni Islam also has the idea of beatific vision. The Qur'an speaks of believers seeing Allah in paradise. In chapter 75, verses 22–23, it states "On that day, faces shall be radiant, gazing upon their Lord.".

There is also a Hadith of Muhammad which says the following:

Jarir bin `Abdullah Al-Bajali reported: We were sitting with the Messenger of Allah when he looked at the full moon and observed, "You will see your Lord in the Hereafter as you see this moon having no difficulty in seeing it." [Al-Bukhari, chapter 10 Hadith number 529]

Shia Islam, however, is against this idea. Shiites believe that it's impossible to see God because if god can be seen then god has a form. And if god has a form then god needs the form and that can't be because god is absolute.

This is also mentioned in Qur'an verses 153, Surahat An-Nisa: (so indeed they demanded of Musa a greater thing than that, for they said: Show us Allah manifestly; so the lightning overtook them on account of their injustice. Then they took the calf (for a god), after clear signs had come to them, but We pardoned this; and We gave to Musa clear authority)