Belarusians (Belarusian: беларусы, bielarusy; Russian: белорусы), or Byelorussians, are an East Slavic ethnic group who populate the majority of Belarus. There are over 9 million people who associate themselves with the Belarusian nationality today. 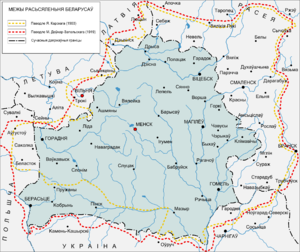 According to Y. Karskiy (1903)
According to M. Dovnar-Zapol'skiy (1919)
Modern state boundaries

Belarusians are an East Slavic ethnic group who populate the majority of the Republic of Belarus. Belarusian minority populations live in countries neighboring Belarus: in Ukraine, in Poland (especially in the Podlaskie Voivodeship), in the Russian Federation and in Lithuania. At the beginning of the 20th century Belarusians constituted a minority in the regions around the city of Smolensk in Russia.

Significant numbers of Belarusians emigrated to the United States, Brazil and Canada in the early 20th century. During Soviet times (1917-1991), many Belarusians were deported or migrated to various regions of the USSR, including Siberia, Kazakhstan and Ukraine.

Since the breakup of the USSR in 1991 several hundred thousand have emigrated to the Baltic states, the United States, Canada, Russia, and EU countries. 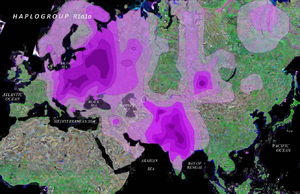 Belarusians have a high percentage of male ancestry Haplogroup R1a (51%), similar to Poles, Russians and Ukrainians. Such large frequencies of R1a have been found only in Eastern Europe and India.[17]

Studies show that genetically, Belarusians have also close similarities with Poles, which belong to the same group. A study of the Y chromosome in East Slavs groups shows that there is no significant variation in the Y chromosome between Belarusians, central-southern Russians and Ukrainians, and it is overlapped by their vast similarities, thus revealing an overwhelmingly shared patrilineal ancestry.[18][19][20] In terms of haplogroup distribution

A genetic portrait of modern Belarusians documents a separation of subpopulations along the south-north line, which is demonstrated particularly in distribution of Y chromosomal lineages R1b, I1a and I1b, N3 and G-chromosomes, has been noted; east-west gradient is insignificant.[21]

The name Belarus can be literally translated as White Ruthenia that is a historical region in the east of modern Republic of Belarus, known in Latin as Ruthenia Alba (English: White Rus). This name was in use in the West for some time in history, together with White Ruthenes, White Russians (though not to be confused with the political group of White Russians that opposed the Bolsheviks during the Russian Civil War) and similar forms. Belarusians trace their name back to the people of Rus'.

The term Belarusians was promoted mostly during the 19th century by the Russian Empire. For instance, this can be traced by editions of folklorist researches by Ivan Sakharov, where in the edition of 1836 Belarusian customs are described as Litvin, while in the edition of 1886 the words Литва (Lithuania) and Литовцо-руссы (Lithuanian-Russians/Ruthenians) are replaced by respectively Белоруссия (Byelorussia) and белоруссы (Byelorussians).[22][23][24] 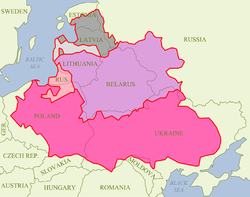 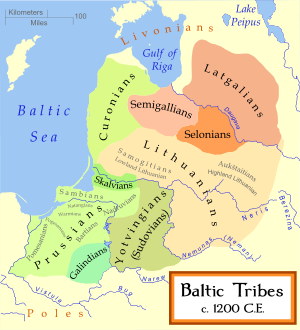 Baltic population in the 12th century

The Belarusian people trace their distinct culture to the Grand Duchy of Lithuania, earlier Kievan Rus and the Principality of Polatsk. Most Belarusians are descendants of the East Slav tribes Dregovichs, Krivichs and Radimichs, as well as of a Baltic tribe of Jotvingians who lived in the west and north-west of today's Belarus.[25]

Belarusians began to emerge as a people during the thirteenth through fourteenth centuries in the Grand Duchy of Lithuania. Mostly on the lands of the upper basins of Neman River, Dnieper River and the Western Dvina River.[26]

In 13th–18th centuries Belarusians were mostly known under the names of Litvins/Lithuanians and Ruthenians which refers to the Eastern part of state of the Grand Duchy of Lithuania (Litva, Vialikaja Litva) of which the White Ruthenian, Black Ruthenian and Polesian lands were part of since the 13th–14th centuries, and where the Ruthenian language developed and gradually became the dominant written language in the Grand Duchy of Lithuania, replacing Latin. Casimir's Code of 1468 and all three editions of Statutes of the Grand Duchy of Lithuania (1529, 1566, and 1588) were written in the Ruthenian (also referred to as Old Belarusian) language. I the from 1630s it was replaced by the Polish language, as a result of Polish high culture acquiring increasing prestige in the Polish-Lithuanian Commonwealth.

Between 1791 and 1917 much of Belarus, with its Christian and Jewish populations, was acquired by the Russian Empire in a series of military conquests and diplomatic manoeuvres, and was made part of a region known as the Pale of Settlement.

After World War I Belarusians revived their own statehood, with varying degrees of independence – first as the short-lived Belarusian National Republic under German occupation, then as the Byelorussian SSR from 1919 until 1991, which merged with other republics to become a constituent member of the Soviet Union in 1922). Belarus gained full independence with the dissolution of the Soviet Union in 1991.

Belarusian cuisine shares the same roots with cuisines of other Eastern and Northern European countries, basing predominantly on meat and various vegetables typical for the region.