For a detailed history of the Belgian Army from 1830 to post 1945 see Belgian Armed Forces.

Ranks in use by the Belgian Army are listed at Belgian military ranks. 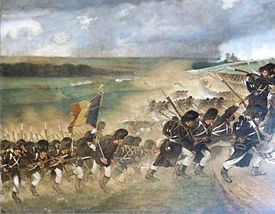 The Regiment of Grenadiers on maneuvers 1894 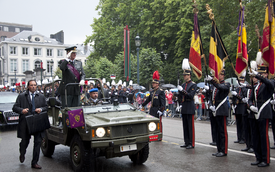 The former King and the armed forces

According to the Law of 16 August 1873, the army was to consist of:[citation needed]

Note: a squadron had approximately 130 horses

Note: A battery has 6 guns

See Belgian Army order of battle (1914) A major reorganisation of the army had been authorised by the government in 1912, providing for a total army of 350,000 men by 1926 - 150,000 in the field forces, 130,000 in fortress garrisons and 70,000 reserves and auxiliaries. At the outbreak of war this reorganisation was nowhere near complete and only 117,000 men could be mobilised for the field forces, with the other branches equally deficient.

The Commander-in-Chief was King Albert I, with Lieutenant-General Chevalier de Selliers de Moranville as the Chief of the General Staff.

In addition, there were garrisons at Antwerp, Liège and Namur, each placed under the command of the local divisional commander.[1]

The nominal strength of a division varied from 25,500 to 32,000 all ranks, with a total strength of eighteen infantry battalions, a cavalry regiment, eighteen machine-guns, and forty-eight guns. Two divisions (the 2nd and 6th) each had an additional artillery regiment, for a total of sixty guns.

The Cavalry Division had two brigades of two regiments each, three horse artillery batteries, and a cyclist battalion, along with support units; it had a total strength of 4,500 all ranks with 12 guns, and was - in effect - little more than a reinforced brigade.

The Belgian Army stubbornly resisted during the early days of the war, with the army - around a tenth the size of the German Army - holding up the German offensive for nearly a month, giving their French and British allies time to strengthen for the Marne counteroffensive later in the year.[citation needed]

In 1940, the Belgian Army was organized as follows. The King of Belgium was the commander in chief. There were 100,000 active duty personnel with army strength reaching 550,000 when mobilized. There were five corps, including three Active Army Corps (Infantry); Brussels, Antwerp, and Liege and later as follows:

The infantry divisions had a division staff and three infantry regiments each of 3,000 men. each regiment had 108 light machineguns, 52 heavy machineguns, nine heavy mortars or infantry gun howitzers, and six antitank guns.

There was also a cavalry Corps of two divisions.

Within the Free Belgian Forces that were formed in Great Britain during the occupation of Belgium between 1940–45, there was a land force formation, the 1st Belgian Infantry Brigade. An additional three divisions were raised and trained in Northern Ireland, but the war ended before they could see action. However, they joined the initial Belgian occupation force in Germany, I Belgian Corps, whose headquarters moved to Luedenscheid in October 1946.[2] Of the 75,000 troops that found themselves in Germany on 8 May 1945, the vast majority had been recruited after the liberation of Belgium.[3]

After the end of the Cold War, forces were reduced. Initial planning in 1991 called for a Belgian-led corps with 2 or 4 Belgian brigades, a German brigade, and possibly a U.S. brigade.[5] However, by 1992 this plan was looking unlikely and in 1993 a single Belgian division with two brigades became part of the Eurocorps.[6]

See also List of active units of the Belgian Army 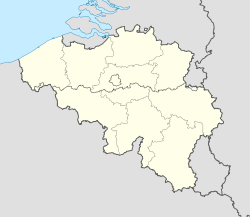 The Land Component is organised using the concept of capacities, whereby units are gathered together according to their function and material. Within this framework, there are five capacities: command, combat, support, services and training.

The command capacity groups the following levels of command: COMOPSLAND (Operational Command of the Land Component), Medium Brigade at Leopoldsburg (formed from the 1st Mechanised Brigade in 2011) and Light Brigade (formerly the 7th Mechanised Brigade) at Marche-en-Famenne.

The support capacity is, as its name suggests, the support arm of the Land Component and comprises one reconnaissance units, a unit for information analysis, civilian-military cooperation and operational communication unit (known as the Information Operations Group or 17 Recce, based at Heverlee), one artillery unit and two engineer battalions. The reconnaissance unit is the Bataillon de Chasseurs à Cheval. The artillery unit is the 2nd Field Artillery Regiment. The engineer battalions are the 4th and the 11th Engineer Battalion.

The service capacity comprises communication and information systems (CIS) groups, three logistics battalions, the Military Police Group and the Military Detachment Palace of the Nation, the Explosive Ordnance Disposal (known as DOVO in Dutch and SEDEE in French, the Movement Control Group and the training centres and camps. The three CIS groups are: the 4th, the 6th and the 10th Group CIS. The logistics battalions are: the 4th, the 18th and the 29th. The Belgian Military Police Group (Groupe Police Militaire / Groep Militaire Politie - Gp MP) is a joint force made up of about 200 personnel assigned to five detachments located around the country. The Military Police Group staff is located in the Queen Elizabeth Barracks in the Brussels suburb of Evere. Alpha Detachment located at Evere covers the province of Flemish Brabant and the capital, Brussels. Bravo Detachment covers Walloon Brabant, Hainaut and Namur areas and is located at Nivelles. Charlie Detachment located at Marche-en-Famenne covers the Liege and Luxembourg areas. Delta Detachment covers the Limburg and Antwerp areas and is located at Leopoldsburg. Echo Detachment located at Lombardsijde covers West and East Flanders.

Structure of the Belgian Land Forces

There are two Brigades and they are organised as follows: 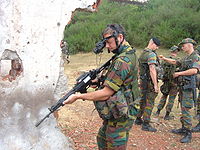 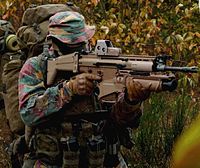 The Belgian Army is currently undergoing a major re-equipment programme for most of its vehicles. The aim is to phase out all tracked vehicles in favour of wheeled vehicles. As of 2010, the tank units were to be disbanded or amalgamated with the Armored Infantry (2 Inf Coy and 1 Tk Sqn per Bn). 40 Leopard 1 tanks were still waiting to be sold; the rest were transferred to Lebanon. As of 2013, only some M113 variants (Radar, recovery, command postn and driving school vehicles) and Leopard variants (Recovery, AVLB, Pionier, driving tanks) will remain in service.

The Leopard 1A5 tank was retired on 10 September 2014. 56 of the tanks will be sold, about 24 will stay as historic monuments or serve as a museum pieces; the rest will be phased out or used for target practice.[10][11]

Belgian soldier next to a Mercedes-Benz Transporter.

In addition a number of other light utility vehicles are used.

An M75 APC at the Brussels army museum.