From Infogalactic: the planetary knowledge core
Jump to: navigation, search
For the city in Ukraine, see Bilhorod-Dnistrovskyi. For the defunct city in Kievan Rus, see Belgorod Kievsky.
Not to be confused with Belgrade.

The name Belgorod in Russian literally means "a white city", being a compound of "белый" (bely, "white, light") and "город" (gorod, "town, city"). The city was thus named after the region being rich in limestone. Etymologically, it corresponds to other Slavic city names of identical meaning: Belgrade, Belogradchik, Białogard, Biograd, Bilhorod, Bilhorod-Dnistrovskyi etc.

The settlement was first mentioned in 1237, when it was ravaged by the hordes of Batu Khan. It is unclear whether this Belgorod was located at the same place where the current city is. In 1596, it was re-founded by the order of Feodor Ioannovich as one of numerous forts set up to defend Southern borders from the Crimean Tatars.[11] In the 17th century it suffered repeatedly from Tatar incursions, against which there was built (from 1633 to 1740) an earthen wall, with twelve forts, extending upwards of 200 miles from the Vorskla to the Don, and called the Byelgorod line. In 1666, an archiepiscopal see was established in the town.[15] 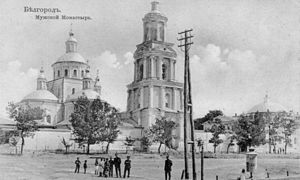 After the Russian border was moved further south following the annexation of eastern Ukraine to Russia, the fortress fell in disrepair and the town was assigned to Kursk Governorate.

Peter the Great visited it on the eve of the Battle of Poltava, and a dragoon regiment was stationed in the town until 1917.

Ioasaph of Belgorod, an 18th-century bishop, became widely venerated as a miracle worker and was glorified as a saint of the Russian Orthodox Church in 1911. 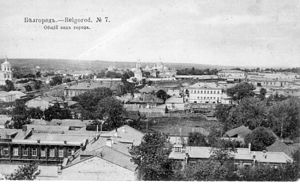 Soviet power was established in the city on October 26 (November 8), 1917. On April 10, 1918, Belgorod was occupied by German troops. After the conclusion of the Brest-Litovsk peace treaty the demarcation line passed to the north of the city and Belgorod was incorporated into the Ukrainian State headed by Hetman Pavlo Skoropadskyi.

On December 20, 1918, after the overthrow of Skoropadskiy the city was occupied by the Red Army and became part of the RSFSR. From December 24, 1918 to January 7, 1919, the temporary Workers' and Peasants' Government of Ukraine led by General Piatakov was housed in Belgorod. The city was the temporary capital of Ukraine. From June 23 to December 7, 1919, the town was part of the white South of Russia and took his volunteer army.

It was occupied by Nazi Germany on October 25, 1941 to February 9, 1943. It was recaptured by the Germans on March 18, 1943 in the final move of the Third Battle of Kharkov. On July 12, 1943, during the Battle of Kursk, the largest tank battle in world history took place near Prokhorovka, and the city was consequently liberated for good on August 5, 1943. The Belgorod Diorama is one of the World War II monuments commemorating the event.

In 1954, the city became the administrative center of Belgorod Oblast. From this time the rapid development of the city as a regional center began. We can say that the city was rebuilt.

Belgorod is an administrative, industrial and cultural center of Belgorod Oblast, established in 1954. The major educational centers of the city are Belgorod State University, Technological University, Agricultural Academy, Financial Academy.

Belgorod Drama Theater is named after one of the famous 19th-century actors Mikhail Shchepkin who was born in this region.

On April 22, 2013, a mass shooting occurred at approximately 2:20 PM Moscow time on a street in Belgorod. The shooter, identified as 31-year-old Sergey (Sergei) Pomazun (Сергей Помазун), opened fire with a semi-automatic rifle on several people at a gun store and a sidewalk, killing all six people that were hit: three people at the store and three passersby, including two teenage girls. Pomazun was later apprehended after an extensive day-long manhunt; during his arrest, he wounded a policeman with a knife. He was later sentenced to life in prison on August 23, 2013. 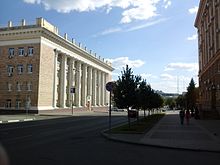 For administrative purposes, Belgorod is divided into two city okrugs:

Since 1869, there has been a railway connection between Belgorod and Moscow.[17] Belgorod is served by the Belgorod International Airport (EGO).

The city has two bus stations: Bus Belgorod, Belgorod- 2 Bus Terminal (located on the forecourt ), as well as bus stop complex Energomash. The Energomash bus station is mainly for commuting buses. From the bus station Belgorod-2 buses go mainly to nearby regional centers, and departure of buses in accordance with the arrival of trains.

Belgorod is twinned with: