Belgorod Oblast (Russian: Белгоро́дская о́бласть, Belgorodskaya oblast) is a federal subject of Russia (an oblast). Its administrative center is the city of Belgorod. Population: 1,532,526 (2010 Census results).[8] 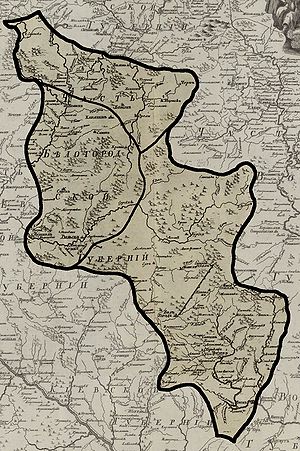 At the turn of the 17th century, a solid line of military fortifications was built in the area, stretching for almost 800 kilometers (500 mi). Ukrainian Cossacks, who moved here because of the nobility and the tax burden, were in charge of the line defenses. Even more Cossacks moved to the area during the Khmelnytsky Uprising (1648–1657) and the internecine wars in the Cossack Hetmanate (1659–1679). Belgorod became the military and administrative center, after originating as an outpost on the southern borders of Russia.

Following the Battle of Poltava, Peter I granted to soldiers of Greater Belgorod the regiment flag. 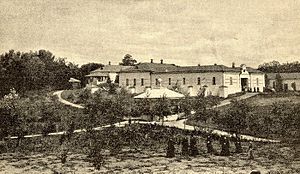 During the 19th century and up until 1928 the territory of modern Belgorod Oblast remained part of Kursk and Voronezh Governorates. After the signing of the Treaty of Brest-Litovsk in April 1918, in January 1919 the territory was incorporated into the Ukrainian State under hetman Pavlo Skoropadskyi.

The current administrative-territorial boundaries of Belgorod Oblast were formed by the Decree of the Presidium of the Supreme Soviet of the USSR on January 6, 1954. The oblast was formed from several districts of Kursk and Voronezh Oblasts.

For the courage and resilience shown by the people of Belgorod Oblast in defense of the Motherland during the Great Patriotic War, and for progress in reconstruction and development of national economy, on January 4, 1967 Belgorod Oblast was awarded the Order of Lenin, and in 1980 the city of Belgorod was awarded the Order of the Patriotic War, first degree.

In 2007, the city of Belgorod received the honorary title of the City of Military Glory.

Belgorod Oblast is part of the Central Black Earth economic region and the Central Federal District. It borders with Luhansk, Kharkiv, and Sumy Oblasts of Ukraine in the south and west, Kursk Oblast in the north and northwest, and Voronezh Oblast in the east. The total length of its borders is about 1,150 kilometers (710 mi), of which 540 kilometers (340 mi) are on the border with Ukraine.

The area of the oblast is 27,100 square kilometers (10,500 sq mi); the oblast stretches for about 190 kilometers (120 mi) from north to south and for about 270 kilometers (170 mi) from east to west. The oblast is located in the southwestern and southern slopes of the Russian Upland in the Dnieper and Don River basins, in the steppe zone of elevated hilly plain with an average height of 200 meters (660 ft) above the sea level. The highest point is 277 meters (909 ft)[citation needed] above sea level, in Prokhorovsky District. The lowest point is located at the bottom of the Oskol and Seversky Donets River valleys.

The climate of Belgorod Oblast is temperate continental with a relatively mild winter with some snowfall and long summers. Average annual air temperature varies from +5.4 °C (41.7 °F) to +6.7 °C (44.1 °F), being warmer on average in the southeast than the north. The coldest month is January and the frost-free period is 155–160 days, with an average of 1800 hours of sunshine. Rainfall is uneven by year and season, with an average of 540–550 mm although rainfall can dramatically differ between the western and northern areas and the warmer, drier eastern and southeast where some years lows of around 400 millimeters (16 in) has been recorded.

Over 40% of known iron ore reserves of Russia are concentrated in the oblast. Deposits are confined to the Kursk Magnetic Anomaly area. Among them are Korobkovsky, Lebedinskoye, Stoylenskoye, and prospective Prioskolskoye iron ore deposits in Stary Oskol District, Bolshetroitskoye in Shebekinsky District, as well as Yakovlevskoye and Pogremetskoye fields.

Identified and explored in varying degrees are the large deposits of bauxites, apatites, underground mineral waters, and numerous deposits of construction materials such as chalk, sand, clay, and more. There are also known occurrences of gold, graphite, and other rare metals. Geographical features make the oblast likely to have deposits of platinum, hydrocarbons, and other minerals.

Rivers, lakes, and marshes occupy about 1% of the oblast's territory. There are more than 480 small rivers and streams. The largest of them are in the northwest — the Seversky Donets, Vorskla, Vorsklitsa, Psyol, and in the eastern regions — the Oskol, Tikhaya Sosna, Chyornaya Kalitva, Valuy. The total length of the river network is roughly 5,000 kilometers (3,100 mi), and in addition, there are 1,100 ponds and four artificial reservoirs.

The fauna of Belgorod Oblast is predominantly of the meadow-steppe variety and comprises, by various estimates, from ten to fifteen thousand species.

Vegetation in Belgorod Oblast reflects the features of the northern forest-steppe, characterized by the alternation of forests with the meadow steppes. It is chiefly represented by two types of vegetation — the zonal and extrazonal. In all, there are 1,284 flora species. Woodlands cover 9.8% of the total area, of which over 800 hectares are classified as protected areas because their rare species of plants and habitats of animals are on the IUCN red list. 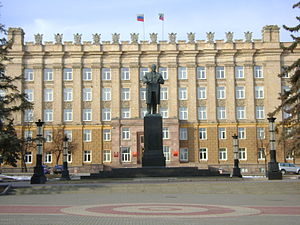 During the Soviet period, the high authority in the oblast was shared between three persons: The first secretary of the Belgorod CPSU Committee (who in reality had the biggest authority), the chairman of the oblast Soviet (legislative power), and the Chairman of the oblast Executive Committee (executive power). Since 1991, CPSU lost all the power, and the head of the Oblast administration, and eventually the governor was appointed/elected alongside elected regional parliament.

The Charter of Belgorod Oblast is the fundamental law of the region. The Legislative Assembly of Belgorod Oblast is the province's standing legislative (representative) body. The Legislative Assembly exercises its authority by passing laws, resolutions, and other legal acts and by supervising the implementation and observance of the laws and other legal acts passed by it. The highest executive body is the Oblast Government, which includes territorial executive bodies such as district administrations, committees, and commissions that facilitate development and run the day to day matters of the province. The Oblast administration supports the activities of the Governor who is the highest official and acts as guarantor of the observance of the oblast Charter in accordance with the Constitution of Russia.

On October 16, 2005, elections to the Oblast Duma were conducted. The United Russia Party has won 20 out of 35 seats, 4 seats were won by the Communist Party, 2 by the LDPR, and 1 by the Rodina party. 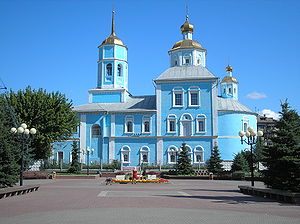 As in other regions of the European part of Russia, since the dissolution of the Soviet Union there has been a natural population decrease (about -5 per 1,000 of the population). In recent years, there has been some reversion of this decline as a result of growth of fertility and mortality. Nevertheless, despite the negative trend of growth, the population of the area has remained relatively stable because of immigration. Belgorod, even in Soviet times, attracted retirement workers from the Far North and Ukraine. This trend has increased since 2005 and now cancels out the natural decline in population. Immigrants also arrive in Belgorod from Azerbaijan and Uzbekistan.[16]

Russian language is the only official language of the oblast.

According to a 2012 official survey[19] 50.5% of the population of Belgorod Oblast adheres to the Russian Orthodox Church, 8% are nondenominational Christians (excluding such-defined Protestant churches), 1% are Orthodox Christian believers who don't belong to any church or are members of non-Russian Orthodox churches. In addition, 22% of the population declares to be "spiritual but not religious", 10% is atheist, and 8.5% follows other religions or did not give an answer to the question.[19]

Belgorod Oblast is a highly developed industrial-agrarian region, whose economy relies on its enormous wealth of mineral resources and the unique black soils.

Belgorod Oblast has traditionally had and still has strong ties with the agro-industrial complex of Ukraine. Despite its relatively small size, the oblast accounts for one fifth of the trade turnover between Russia and Ukraine.[citation needed]

Some 2,713.4 thousand hectares is dedicated to agriculture, over 70% of which are chernozems. Per capita, there are an average of 1.43 hectares of pastoral land, and 1.1 hectares of arable land. Natural forests and forest plantations occupy 248.3 thousand hectares, or 12.5% of the oblast's area. Total timber reserves are estimated to be 34.3 million m3.

Important railways and highways of regional significance cross the oblast's territory, connecting Moscow with the southern and western regions of Russia and Ukraine. Of major importance is the Crimea Highway, or federal highway M-2 Crimea, and the Moscow-Kharkiv-Sevastopol railway line. The length of railways for general use is 694.6 km; the length of paved roads is 8,500 km; roughly 87% of the total road surface in the oblast.