listen); 10 April 1937 – 29 November 2010) was a Soviet and Russian poet, short story writer, and translator, known for her apolitical writing stance.[2] She was part of the Russian New Wave literary movement.[3] She was cited by Joseph Brodsky as the best living poet in the Russian language.[3][4][5]

Despite the aforementioned apolitical stance of her writing, Akhmadulina was often critical of authorities in the Soviet Union,[1] and spoke out in favour of others, including Nobel laureates Boris Pasternak, Andrei Sakharov, and Aleksandr Solzhenitsyn.[2] She was known to international audiences via her travels abroad during the Khrushchev Thaw, during which she made appearances in sold-out stadiums.[6] Upon her death in 2010 at the age of 73, President of Russia Dmitry Medvedev hailed her poetry as a "classic of Russian literature."[5]

The New York Times said Akhmadulina was "always recognized as one of the Soviet Union's literary treasures and a classic poet in the long line extending from Lermontov and Pushkin."[2] Sonia I. Ketchian, writing in The Poetic Craft of Bella Akhmadulina, called her "one of the great poets of the 20th century. There's Akhmatova, Tsvetaeva, Mandelstam, and Pasternak – and she's the fifth".[2]

Bella Akhmadulina was born in Moscow on 10 April 1937, the only child of a Tatar father and a Russian-Italian mother.[2][7] They underwent evacuation to Kazan when World War II broke out.[2]

Akhmadulina's literary career began when she was a school-girl working as a journalist at the Moscow newspaper, Metrostroevets, and improving her poetic skills at a circle organized by the poet Yevgeny Vinokurov. Her first poems appeared in the magazine October after being approved by established Soviet poets.[citation needed] These first poems were published in 1955.[1] Émigré critic Marc Slonim described her prospects as follows in 1964 (Soviet Russian Literature): "Her voice has such a purity of tone, such richness of timbre, such individuality of diction, that if her growth continues she will be able some day to succeed Akhmatova" as "the greatest living woman poet in Russia".[2]

After finishing school, Akhmadulina entered the Maxim Gorky Literature Institute from which she graduated in 1960. While studying at the institute, she published her poems and articles in different newspapers, both official and handwritten. She was the subject of criticism in Komsomolskaya Pravda in 1957.[7] She was expelled in 1959 (but allowed re-entry as time progressed) as a result of her opposition to the persecution of Boris Pasternak.[8] In 1962 the first collection of her poems, titled Struna (The String), was published[7][9] and was a resounding success. In spite of being expunged, many of her collections of verses were published later: Music lessons (1970),[9] Poems (1975), Candle (1977),[9] Dreams of Georgia (1977), The Mystery (1983),[9] Coastline (1991), and others. A collection called Sad (Garden) led to Akhmadulina receiving the USSR State Prize in 1989.[7][9]

"Many dogs and one dog", a short story written in a surreal style, was published in 1979 in Samizdat's Metropol Almanac.[6] She assisted in the creation of Metropol.[7] She wrote essays about Alexander Pushkin and Mikhail Lermontov.[7]

She appeared in sold-out stadiums in the 1960s, as did the poets Yevgeny Yevtushenko, Andrei Voznesensky and Robert Rozhdestvensky.[6]

Her open letter was published supporting the exiled Andrei Sakharov.[10] In October 1993, she signed the Letter of Forty-Two.[11]

The main themes of Akhmadulina's works are friendship, love, and relations between people. She wrote numerous essays about Russian poets and translators, some devoted to her close friend, Bulat Okudzhava. Akhmadulina avoided writing overtly political poems, but took part in political events in her youth, supporting the so-called "dissident movement". She translated into Russian poetry from France, Italy, Chechnya, Poland, Yugoslavia, Hungary, Bulgaria, Georgia, Armenia, and many others.

Akhmadulina wrote in a "resolutely apolitical" style.[2] She made use of imagery and humour in her work.[2] She used rhymed quatrains in her early works, which discussed ordinary, yet imaginative occurrences from daily life in language that was full of both archaisms and neologisms.[2] Religion and philosophy became her themes as she aged and she wrote in longer forms.[2] 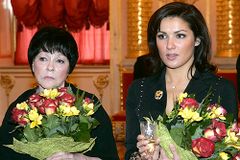 Bella's first marriage in 1954 was to Yevgeny Yevtushenko, another famous poet of the era; her second husband since 1960 was Yuri Nagibin, major novelist and screenwriter. By her 1971 marriage to film director Eldar Kuliev she has a daughter, Elizaveta Kulieva, who is also a poet.[13] In 1974, she married her last husband, the famous artist and stage designer Boris Messerer. They had homes in Peredelkino and Moscow.

Akhmadulina died at her home in Peredelkino near Moscow on 29 November 2010. She was 73 years old. Her death was announced about one hour later.[7] Akhmadulina's husband said her death was from a heart condition,[5] describing it as a " cardiovascular crisis".[7] Dmitry Medvedev and Vladimir Putin both paid tribute,[6][9] with Medvedev writing on his blog that the death was an "irreparable loss".[5] Medevdev also wrote that Akhmadulina's poetry was a "classic of Russian literature".[5]

In 1977, Bella Akhmadulina became an Honorary Member of the American Academy of Arts and Letters (see AAAL website).