From Infogalactic: the planetary knowledge core
Jump to: navigation, search
Not to be confused with Belastok Voblast.

Belostok Oblast (Russian: Белостокская область; Polish: Obwód białostocki) was an administrative division in the Russian Empire. The region had a capital in Belostok (modern Białystok).

The oblast was created from former Prussian Białystok Department,[1] gained in 1807 by Russia in the Treaties of Tilsit.[2]

The oblast was abolished in 1842 when it was included into Grodno Governorate.[3] 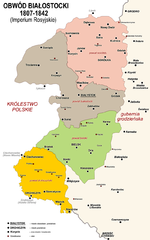 In the 19th century, some of the oblasts were administrative divisions which had a status roughly equal to that of the guberniyas; i.e., they existed independently from the guberniyas, not as their parts as it used to be the case in the 18th century.

In 1808, the Oblast was divided into four uyezds (districts):

In 1842 the number of districts was reduced to three when Drohiczyń District was merged into Bielsk District.