Benjamin Franklin Butler (December 17, 1795 – November 8, 1858) was a lawyer, legislator and Attorney General of the United States. He was also a co-founder of Children's Village.[1]

He was the son of Medad Butler and Hannah Butler (née Tylee), of Kinderhook Landing, in Columbia County, New York. He studied at Hudson Academy in Hudson, New York, and read law with Martin Van Buren, whose son John Van Buren later read law with Butler.

Butler was admitted to the bar in 1817, and became Martin Van Buren's partner. Francis Wellman, in his book The Art of Cross-Examination, regarded Butler as one of the most successful cross-examiners of his day (p. 233).[2]

Butler was one of the earliest members of the Albany Regency. He began his political career as district attorney of Albany County, serving from 1821 to 1824. He was appointed one of the three commissioners to revise the State statutes in 1825. Butler was a member from Albany County of the New York State Assembly in 1828. In 1833, he served as commissioner for New York to adjust the New Jersey boundary line. On November 15, 1833, President Andrew Jackson appointed Butler Attorney General, an office he held until 1838. From that year until 1841, and from 1845 to 1848, he was United States Attorney for the Southern District of New York. 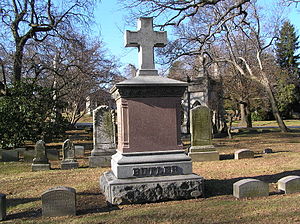 The monument of Benjamin Butler in Woodlawn Cemetery

While visiting Europe in 1858, he died in Paris, France. He was buried at Woodlawn Cemetery in The Bronx.[3]

Fort Butler, one of the main forts built for the forced removal of the Cherokee Indians on the Trail of Tears, was named for him.[4]

He was the grandfather of Sir Alfred Allen Booth, 1st Baronet, a director of Alfred Booth and Company and chairman of Cunard.