Benjamin Nathan Cardozo (May 24, 1870 – July 9, 1938) was an American jurist who served on the New York Court of Appeals and later as an Associate Justice of the Supreme Court. Cardozo is remembered for his significant influence on the development of American common law in the 20th century, in addition to his philosophy and vivid prose style. Cardozo served on the Supreme Court six years, from 1932 until his death in 1938. Many of his landmark decisions were delivered during his eighteen-year tenure on the New York Court of Appeals, the highest court of that state.

The family were descended from Jewish-origin New Christian conversos who left the Iberian Peninsula for Holland during the Inquisition,[2] after which they returned to Judaism. Cardozo family tradition held that their marrano (New Christians who maintained crypto-Jewish practices in secrecy) ancestors were from Portugal,[2] although Cardozo's ancestry has not been firmly traced to Portugal.[3] However, "Cardozo" (archaic spelling of Cardoso), "Seixas" and "Mendes" are the Portuguese, rather than Spanish, spelling of those common Iberian surnames.

Benjamin Cardozo was a twin with his sister Emily. They had a total of four siblings, including an older sister and brother. One of many cousins was the poet Emma Lazarus; another was the preacher, politician, and teacher Francis Lewis Cardozo. Benjamin was named for his uncle, Benjamin Nathan, a vice president of the New York Stock Exchange and the victim of a noted famous unsolved murder case in 1870.[4]

Albert Cardozo, Benjamin Cardozo's father, was a judge on the Supreme Court of New York (the state's general trial court) until 1868, when he was implicated in a judicial corruption scandal, sparked by the Erie Railway takeover wars. The scandal led to the creation of the Association of the Bar of the City of New York and his father's resignation from the bench. After leaving the court, he practiced law for nearly two decades more until his death in 1885.

Rebecca Cardozo died in 1879 when Benjamin and Emily were young. The twins were raised during much of their childhood by their older sister Nell, who was 11 years older. One of Benjamin's tutors was Horatio Alger.[5] At age 15, Cardozo entered Columbia University[5] where he was elected to Phi Beta Kappa,[6] and then went on to Columbia Law School in 1889. Cardozo wanted to enter a profession that could materially aid himself and his siblings, but he also hoped to restore the family name, sullied by his father's actions as a judge. When Cardozo entered Columbia Law School, the program was only two years long; in the midst of his studies, however, the faculty voted to extend the program to three years. Cardozo declined to stay for an extra year, and thus left law school without a law degree.[7] He passed the bar in 1891 and began practicing appellate law alongside his older brother.[5] Benjamin Cardozo practiced law in New York City until 1914.[5] In November 1913, Cardozo was narrowly elected to a 14-year term on the New York Supreme Court, taking office on January 1, 1914.

His tenure was marked by a number of original rulings, in tort and contract law in particular. This is partly due to timing; rapid industrialization was forcing courts to look anew at old common law components to adapt to new settings.[5] In 1921, Cardozo gave the Storrs Lectures at Yale University, which were later published as The Nature of the Judicial Process (On line version), a book that remains valuable to judges today. Shortly thereafter, Cardozo became a member of the group that founded the American Law Institute, which crafted a Restatement of the Law of Torts, Contracts, and a host of other private law subjects. He wrote three other books that also became standards in the legal world.[5]

While on the Court of Appeals, he criticized the Exclusionary rule as developed by the federal courts, and stated that: "The criminal is to go free because the constable has blundered." He noted that many states had rejected the rule, but suggested that the adoption by the federal courts would affect the practice in the sovereign states.[9][10][11][12] 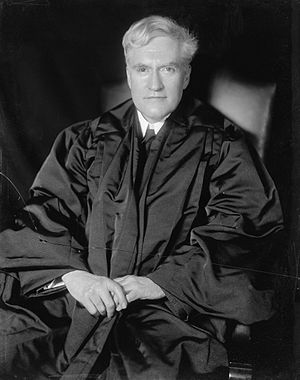 Justice Cardozo in his robes 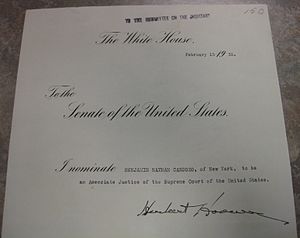 In 1932, President Herbert Hoover appointed Cardozo to the Supreme Court of the United States to succeed Justice Oliver Wendell Holmes. The New York Times said of Cardozo's appointment that "seldom, if ever, in the history of the Court has an appointment been so universally commended."[13] Democratic Cardozo's appointment by a Republican president has been referred to as one of the few Supreme Court appointments in history not motivated by partisanship or politics, but strictly based on the nominee's contribution to law.[14] However, Hoover was running for re-election, eventually against Franklin Roosevelt, so a larger political calculation may have been operating.

Cardozo was confirmed by a unanimous voice vote in the Senate on February 24.[15] On a radio broadcast on March 1, 1932, the day of Cardozo's confirmation, Clarence C. Dill, Democratic Senator for Washington, called Hoover's appointment of Cardozo "the finest act of his career as President".[16] The entire faculty of the University of Chicago Law School had urged Hoover to nominate him, as did the deans of the law schools at Harvard, Yale, and Columbia. Justice Harlan Fiske Stone strongly urged Hoover to name Cardozo, even offering to resign to make room for him if Hoover had his heart set on someone else (Stone had in fact suggested to Calvin Coolidge that he should nominate Cardozo rather than himself back in 1925).[17] Hoover, however, originally demurred: there were already two justices from New York, and a Jew on the court; in addition, Justice James McReynolds was a notorious anti-Semite. When the chairman of the Senate Foreign Relations Committee, William E. Borah of Idaho, added his strong support for Cardozo, however, Hoover finally bowed to the pressure.

Cardozo was a member of the Three Musketeers along with Brandeis and Stone, which was considered to be the liberal faction of the Supreme Court. In his years as an Associate Justice, he handed down opinions that stressed the necessity for the tightest adherence to the Tenth Amendment.

Cardozo had a flat in this apartment building in Washington, D.C.

As an adult, Cardozo no longer practiced his faith (he identified himself as an agnostic), but remained proud of his Jewish heritage.[20]

Of the six children born to Albert and Rebecca Cardozo, only his twin sister Emily married, and she and her husband did not have any children. As far as is known, Benjamin Cardozo led a celibate life. The fact that Cardozo was unmarried and was personally tutored by the writer Horatio Alger (who had been accused of inappropriate sexual relations with young boys) has led some of Cardozo's biographers to insinuate that Cardozo was homosexual, but no real evidence exists to corroborate this possibility. Constitutional law scholar Jeffrey Rosen noted in a New York Times Book Review of Richard Polenberg's book on Cardozo:

The question of Cardozo's ethnicity

Cardozo was the second Jew, the first being Louis Brandeis, to be appointed to the Supreme Court.

Since Cardozo was a member of the Spanish and Portuguese Jewish community, there has been recent discussion as to whether he should be considered the 'first Hispanic justice,' a notion which is controversial, given that the Spanish Crown expelled the Jews who would not convert and persecuted even some that did.[21][22][23]

In response to this controversy, Cardozo biographer Kaufman questioned the usage of the term "Hispanic" in the justice's lifetime, stating: "Well, I think he regarded himself as a Sephardic Jew whose ancestors came from the Iberian Peninsula."[24] If his family is Portuguese, as he said, then both by definition and by law, this family is not Hispanic. It has also been asserted that Cardozo himself "confessed in 1937 that his family preserved neither the Spanish language nor Iberian cultural traditions".[25] Ancestors had lived in English-speaking countries since the 17th century.

Some Latino advocacy groups, such as the National Association of Latino Elected Officials and the Hispanic National Bar Association, consider Sonia Sotomayor to be the first Hispanic justice.[21][24]

In his own words

Cardozo's opinion of himself shows some of the same flair as his legal opinions: