Had the impeachment of Andrew Johnson in 1868 led to a conviction at trial in the Senate, he would have assumed the presidential powers and duties.

Wade was born in Feeding Hills, Massachusetts, on October 27, 1800 to Mary and James Wade. Benjamin Wade's first job was as a laborer on the Erie Canal. He also taught school before studying law in Ohio with Elisha Whittlesey. After being admitted to the bar in 1828, he began practicing law in Jefferson, Ohio.

Wade formed a partnership with Joshua Giddings, a prominent anti-slavery figure, in 1831. He became the prosecuting attorney of Ashtabula County by 1836, and as a member of the Whig Party, Wade was elected to the Ohio State Senate, serving two two-year terms between 1837 and 1842. He established a new law practice with Rufus P. Ranney and was elected presiding judge of the third district in 1847. Between 1847 and 1851, Wade was a judge of common pleas in what is now Summit County (Ohio).

After the decline of the Whigs' power, Wade joined the Republican Party, and in 1851 he was elected by his legislature to the United States Senate. There, he associated with such eventual Radical Republicans as Thaddeus Stevens and Charles Sumner. He fought against the controversial Fugitive Slave Act and the Kansas–Nebraska Act. He was one of the most radical politicians in America at that time, supporting women's suffrage, trade union rights, and equality for African-Americans. He was also critical of how certain aspects of capitalism were practiced in the 19th century. 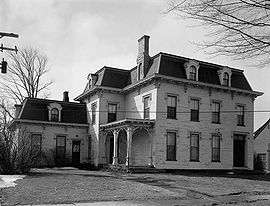 During the American Civil War, Wade was highly critical of President Abraham Lincoln; in a September 1861 letter, he privately wrote that Lincoln's views on slavery "could only come of one born of poor white trash and educated in a slave State." He was especially angry when Lincoln was slow to recruit African-Americans into the armies, and actively advocated for the bill that abolished slavery and had a direct hand in the passing of the Homestead Act of 1862 and the Morrill Land Grant Act of 1862.

Wade was also critical of Lincoln's Reconstruction Plan; in December 1863, he and Henry Winter Davis sponsored a bill that would run the South, when conquered, their way. The Wade–Davis Bill mandated that there be a fifty-percent White male Iron-Clad Loyalty Oath, Black male suffrage, and Military Governors that were to be confirmed by the U.S. Senate. It passed in the lower chamber on May 4, 1864 by a margin of 73 ayes to 59 nays; in the upper chamber on July 2, 1864 it passed by a similar percentage of 18 ayes to 14 nays and was brought to Lincoln's desk. Tradition has it that Zachariah Chandler asked him directly if "he plan on signing it or no?" and Lincoln replied, "it was put before him with too little time to be signed in that way." On July 4, 1864, he pocket-vetoed the bill by refusing to sign it. Lincoln later said that he didn't want to be held to one Reconstruction policy.[citation needed] This action drove Wade to sign, along with Davis, the Wade–Davis Manifesto, which accused the president of seeking reelection by the executive establishment of new state governments.

On July 28, 1866, the 39th Congress passed an act to adjust the peacetime establishment of the United States military. Wade proposed that two of the cavalry regiments should be composed of African American enlisted personnel. After strong opposition, the legislation was passed which provided for the first black contingent in the regular U.S. Army consisting of six regiments: 9th and 10th Cavalry and the 38th, 39th, 40th, and 41st Infantry Regiments. These units made up of black enlisted personnel and white officers were not the first of such units to serve on the Western Frontier. During late 1865 through early 1866, companies from the 57th US Colored Infantry Regiment and the 125th United States Colored Infantry Regiment had been assigned to posts in New Mexico Territory to provide protection for settlers in the area, and escort those going further west. 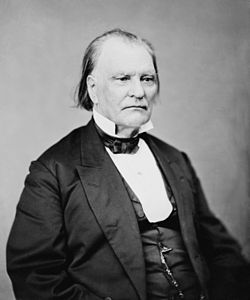 Wade in his later years

Wade, along with most other Radical Republicans, was highly critical of President Andrew Johnson (who became President after Lincoln's assassination). Wade supported the Freedmen's Bureau and Civil Rights Bills (which he succeeded in extending to the District of Columbia) and was a strong partisan of the 14th Amendment. He also strengthened his party in Congress by forcefully advocating the admission of Nebraska and Kansas. These actions made him so prominent that at the beginning of the 40th Congress (in 1867), Wade became the President pro tempore of the U.S. Senate, which meant that under the law of that time he was next in line for the presidency (as Johnson had no vice president).

After many fallouts with the Republican-dominated Congress, the Judiciary Committee voted to impeach President Johnson (who had been a Democrat). When Johnson was impeached, Wade was sworn in as one of the senators sitting in judgment, but was greatly criticized because of his unseemly interest in the outcome of the trial. Although most senators believed that Johnson was guilty of the charges, they did not want the extremely radical Wade to become acting president. One newspaper wrote, "Andrew Johnson is innocent because Ben Wade is guilty of being his successor."[1]

According to John Roy Lynch (R-MS, 1873–77, 1882–83), one of the twenty-two African Americans elected to Congress from the South during Reconstruction, in his book Facts Concerning Reconstruction:

It was believed by many at the time that some of the [moderate] Republican Senators that voted for acquittal [of Andrew Johnson] did so chiefly on account of their antipathy to the man who would succeed to the presidency in the event of the conviction of the [sitting] president. This man was Senator Benjamin Wade, of Ohio, President pro tempore of the Senate who as the law then stood, would have succeeded to the presidency in the event of a vacancy in the office from any cause. Senator Wade was an able man … He was a strong party man. He had no patience with those who claimed to be [Radical] Republicans and yet refused to abide by the decision of the majority of the party organization [as did Grimes, Johnson, Lincoln, Pratt, and Trumbull] … the sort of active and aggressive man that would be likely to make for himself enemies of men in his own organization who were afraid of his great power and influence, and jealous of him as a political rival. That some of his senatorial Republican associates should feel that the best service they could render their country would be to do all in their power to prevent such a man from being elevated to the Presidency … for while they knew he was an able man, they also knew that, according to his convictions of party duty and party obligations, he firmly believed he who served his party best served his country best…that he would have given the country an able administration is concurrent opinion of those who knew him best.[2]

In 1868, then-presidential candidate Ulysses S. Grant was urged by his fellow Republicans to choose Wade as his vice presidential running mate; but he refused, instead choosing another radical, Schuyler Colfax, who coincidentally married Wade's niece, Ellen Maria Wade, shortly after the election. After being defeated in the 1868 elections, Wade returned to his Ohio law practice. Though no longer a government official, Wade continued to contribute to the world of law and politics. He became an agent of the Northern Pacific Railroad, continued his party activities, became a member of the commission researching the likelihood of the purchase of the Dominican Republic in 1871 and served as an elector for Rutherford Hayes in the election of 1876. He died on March 2, 1878, in Jefferson, Ohio.