Berchtesgaden (German pronunciation: [ˈbɛʁçtəsˌɡaːdən](often incorrectly pronounced as Berchtesgarden by native English speakers) is a municipality in the German Bavarian Alps. It is located in the south district of Berchtesgadener Land in Bavaria, near the border with Austria, some 30 km south of Salzburg and 180 km southeast of Munich. To the south of the city the Berchtesgaden National Park stretches along three parallel valleys.

Berchtesgaden is often associated with the Watzmann, at 2,713 m the third-highest mountain in Germany (after Zugspitze and Hochwanner), which is renowned in the rock climbing community for its Ostwand (East Face), and a deep glacial lake by the name of Königssee (5.2 km²). Another notable peak is the Kehlstein mountain (1,835 m) with its Kehlsteinhaus (Eagle's Nest), which offers spectacular views to its visitors.

First ever historical note dates back to 1102 and it mentions the area because of its rich salt deposits. Much of Berchtesgaden's wealth has been derived from its salt mines, the first of which started operations in 1517.[3] The town served as independent Fürstpropstei until the Reichsdeputationshauptschluss in 1803. During the Napoleonic wars, Berchtesgaden changed hands a few times, such as in 1805 under the Treaty of Pressburg, when the area was ceded to Austria. Salzburg was always interested in Berchtesgaden[citation needed], and French troops occupied the area a short time.[citation needed] Berchtesgaden came under Bavarian rule in 1810 and became instantly popular with the Bavarian royal family, the House of Wittelsbach, who often visited Königssee and maintained a royal hunting residence in the former Augustine monastery (still today used by Franz, Duke of Bavaria). Nascent tourism started to evolve and a number of artists came to the area, which reportedly gave rise to "Malereck" (literally painter's corner) on the shore of Königssee in nearby Ramsau bei Berchtesgaden. The most famous author who lived in Berchtesgaden was Ludwig Ganghofer. 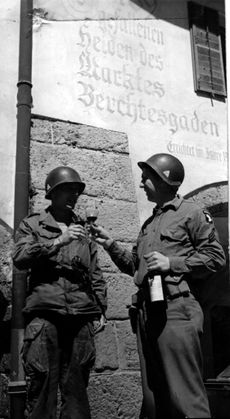 US soldiers toast the capture of Berchtesgaden (1945)

Adolf Hitler had been vacationing in the Berchtesgaden area since the 1920s. He purchased a home in the Obersalzberg above the town on the flank of the Hoher Goll and began extensive renovations on his Berghof in the following years. As other top Nazi Party leaders such as Herman Goering, Joseph Goebbels, and Albert Speer began to frequent the area the Party began to purchase and requisition land in the Obersalzberg.

In order to serve as an outpost of the German Reichskanzlei (Imperial Chancellery), Berchtesgaden and its environs (Stanggass) saw substantial expansion of offices, security, and support services, mainly on the Obersalzberg. Included in the town were a new railway station with reception area for Hitler and his guests, and adjacent post office. The Berchtesgadener Hof Hotel, where famous visitors such as Neville Chamberlain and David Lloyd George stayed, was substantially upgraded. The Kehlsteinhaus (known as the Eagle's Nest among the Allies) atop the Kehlstein subpeak of the Hoher Goll was built as a present for Hitler's 50th birthday in 1939.

Even though a feared "National Redoubt" last stand of the Nazi Regime in the Alps failed to materialize, late in World War II the Allies launched a devastating air raid on the Berchtesgaden area. Concentrated on the Obersalzberg, the April 25, 1945 bombing did little damage to the town. On May 4th forward elements of the 7th Infantry Regiment of the 3rd Infantry Division arrived[4] and received the town's surrender.[5]

After the war, Obersalzberg became a military zone and most of its buildings were requisitioned by the US Army. Hotel Platterhof was rebuilt and renamed the General Walker Hotel[2] in 1952. It served as an integral part of the US Armed Forces Recreation Centers (AFRC) for the duration of the Cold War and beyond. The remnants of homes of former Nazi leaders were all demolished in the early postwar years, though traces of some remained.

In 1995, 50 years after the end of World War II and five years after German reunification, the AFRC Berchtesgaden was turned over to Bavarian authorities to facilitate military spending reductions mandated within the Base Realignment and Closure program by the United States Congress and the Pentagon during the administration of US President Bill Clinton. The General Walker Hotel was brought down in 2000. 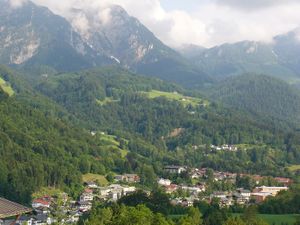 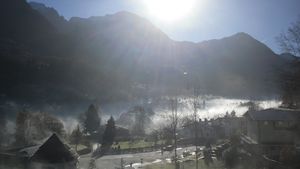 Berchtesgaden in the morning

The former Royal Castle at Berchtesgaden

In 1972, local government reform united the then independent municipalities of Salzberg, Maria Gern and Au (consisting of Oberau and Unterau) under the administration of the town of Berchtesgaden. Another suggested reform uniting all remaining five municipalities in the Berchtesgaden valley (Bischofswiesen, Ramsau, Marktschellenberg and Schönau) failed to gain enough popular support; it passed in Berchtesgaden but failed everywhere else.

The Berchtesgaden National Park was established in 1978 and has gradually become one of Berchtesgaden's largest draws. Mass tourism is confined to a few popular spots, leaving the rest to nature-seekers. Major tourist draws are the Königssee, the salt mine, the Kehlsteinhaus (open seasonally as a restaurant). and the new Dokumentationszentrum Obersalzberg (built on the site of the former guest house "Höher Göll"). It is the first German museum of its kind to chronicle the entire span of World War II in one spot.[citation needed] An InterContinental Hotel Resort was built where the Berghof formerly stood.

Very few other traces of the Third Reich era remain in the area, including the former SS HQ at Hotel Zum Türken, Albert Speer's house, and a small part of the Platterhof.[citation needed]

Recreational and competitive sports have grown in importance. The town's ski slope is popular. The Königssee bobsleigh, luge, and skeleton track has hosted ski-running and a number of international events and competitions. Berchtesgaden's most famous sports personality is Georg Hackl, a multiple Olympic medal winner. The city is home to the International Luge Federation (FIL).

Unlike the northern part of Berchtesgadener Land and the Salzburg area, Berchtesgaden has virtually no manufacturing industry.

Berchtesgaden Central Station is connected by the Salzburg–Berchtesgaden railway to the Rosenheim–Salzburg railway at Freilassing.