Berchtesgadener Land is a district in Bavaria, Germany. It is bounded by the district of Traunstein and by the state of Austria.

The alpine regions of the south were Bavarian territory from the early Middle Ages. The 11th and 12th centuries saw the founding of numerous mountain villages. One of these settlements was Berchtesgaden, which later assumed a more dominant role in the administrative district that now bears its name.

The northern portion of the Salzach river valley was traditionally part of bishopric (principality) of Salzburg. This principality functioned as a buffer state between Bavaria and Austria until the early 19th century. In 1816 it was divided along the Salzach river and then split between Bavaria and Austria. The western half of the former principality of Salzburg is today part of the district of Berchtesgadener Land.

Two important historical events have dramatically reshaped Berchtesgadener Land in recent years, namely Austria's signing of the Schengen treaty in 1990 and the introduction of the Euro in 2002 in both Germany and Austria. Municipalities on both sides of border have been brought much closer by these changes, and the area is reversing many of the effects caused by the split of 1816. There is close and mutually beneficial cooperation in areas such as public transport, recreational sports and culture. There is even a cross-border radio station called "Radio Untersberg"(website), which would have been unimaginable some 20 years ago due to different government regulations.

Salzburg has gradually asserted a new role as an economic, educational and cultural center of the area, which has had a ripple effect through several municipalities such as Freilassing, which have traditionally defined themselves as German border towns.

This district comprises the southeastern tip of Bavaria. It consists of a high alpine countryside in the south, with mountains rising to more than 2500 m, and of a strip along the Saalach River. The city of Salzburg (Austria) is located on the opposite side of the Saalach, across from the town of Freilassing. 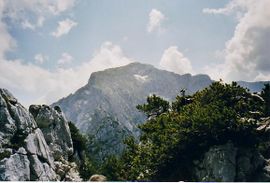 The very south is occupied by the Berchtesgaden National Park (210 km²) comprising the Watzmann massif (2713 m) and the Königssee, a lake of 5.2 km² surrounded by majestic mountains.