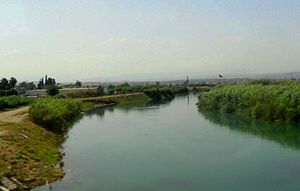 Berdan River from the south 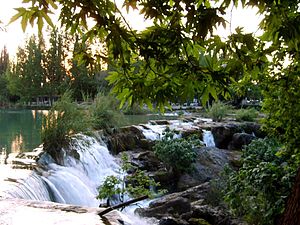 The Berdan River, also called the Tarsus River (Latin:Cydnus), is a river in Mersin Province, south Turkey. The historical city of Tarsus is by the river.

The main headwaters are in the Toros Mountains. There are two main tributaries: Kadıncık and Pamukluk (its upper reaches are called Cehennem Deresi). Total length of the river is 124 kilometres (77 mi) (including Kadıncık). Although the river is quite short, the average discharge[1] is 42 cubic metres per second (1,500 cu ft/s), which is higher than most short rivers in the vicinity. The drainage basin covers 1,592 square kilometres (615 sq mi). The river flows to the Mediterranean Sea at Lua error in Module:Coordinates at line 668: callParserFunction: function "#coordinates" was not found.. Just north of Tarsus there is a waterfall on the river, which is a popular picnic area for Tarsus residents.

Main article: List of dams and reservoirs in Turkey

There are four dams on Berdan. These are used both for controlling floods and for producing electricity.[2] But the lower reaches of the river flow in an agricultural area, and because of the pollution caused by fertilisers the dams in the lower reaches are not used for drinking water.

The Berdan River flows in one of the warmest regions of Turkey, but its upper reaches in the Toros Mountains make the water much cooler than the surrounding streams. History has two very well known accounts of heath problems caused by swimming in the river. In 333 BC Alexander the Great and in 833 AD Caliph Al-Ma'mun both swam in the river and both fell ill (pneumonia?); Al Mamun died of the illness.