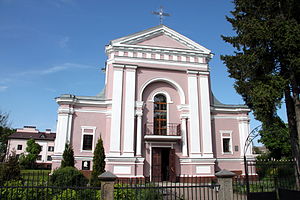 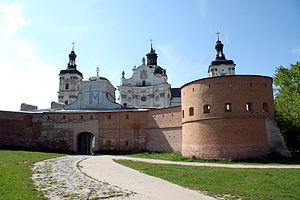 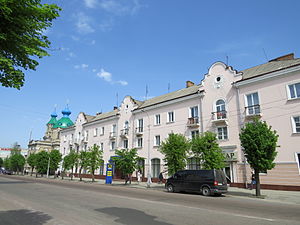 A dwelling house in Berdychiv 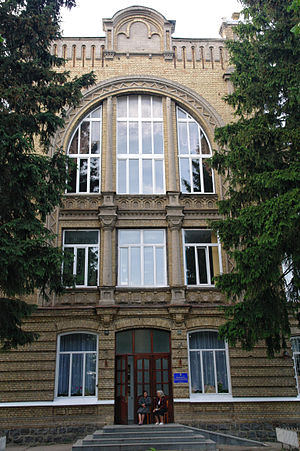 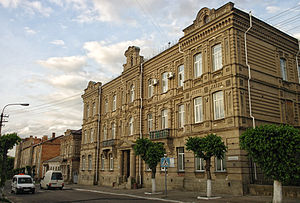 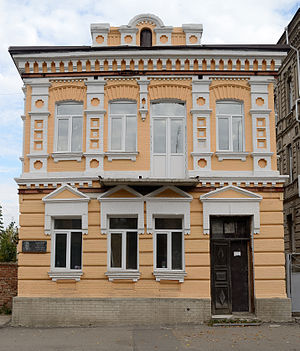 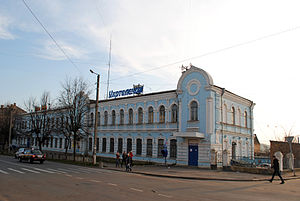 Berdychiv (Ukrainian: Бердичів, Polish: Berdyczów, Russian: Берди́чев, Yiddish: בערדיטשעוו, translit. Berditshev) is a historic city in the Zhytomyr Oblast (province) of northern Ukraine. Serving as the administrative center of the Berdychiv Raion (district), the city itself is of direct oblast subordinance, and does not belong to the district. It is located 44 km (27 mi) south of the oblast capital, Zhytomyr. Population: 78,523 (2013 est.)[1]

In 1430, Grand Duke of Lithuania Vitautas (великий князь литовський Вітовт) granted the rights over the area to Kalinik, the procurator (намісник) of Putyvl and Zvenigorod, and it is believed that his servant named Berdich founded a khutor (remote settlement) there. However the etymology of the name Berdychiv is not known.

In 1483, Crimean Tatars destroyed the settlement. During the 1546 partition between Lithuania and Poland, the region was listed as a property of Lithuanian magnate (Tyszkiewicz). According to the Union of Lublin (1569), Volhynia formed a province of the Polish-Lithuanian Commonwealth.

The fortified Carmelite monastery (built from 1627-1642 with funding from Janusz Tyszkiewicz Łohojski), captured and plundered by Bohdan Khmelnytsky in 1647, was dissolved in 1864.[2]

In 1764, Kazimierz Pulaski defended the city with his 700 men surrounded by royal army during Bar Confederation.

The town underwent rapid development after king Stanisław August Poniatowski, under pressure from the powerful Radziwiłł family, granted it the unusual right to organize ten fairs a year. This made Berdychiv one of the most important trading and banking centers in the Polish-Lithuanian Commonwealth, and later, the Russian Empire. At the time, the saying "Pisz na Berdyczów!" ('Send letters to Berdychiv!') had an idiomatic meaning; because merchants from all over Poland, Lithuania, Ukraine and the rest of eastern and central Europe were sure to visit the town within two or three months of each other, it became a central poste restante (post office box) of the region. Later, because of the phrase being used in a popular poem by Juliusz Słowacki, "Pisz na Berdyczów!" acquired a second meaning as a brush-off; "send me a letter to nowhere" or "leave me alone".[citation needed]

The banking industry was moved from Berdychiv to Odessa (a major port city) after 1850, and the town became impoverished again in a short period of time.

In 1846, the town had 1893 buildings, 69 of which were brick-made, 11 streets, 80 alleys and 4 squares. Honoré de Balzac visited it in 1850 and noted that its unplanned development made it resemble the dance of a polka as some buildings leaned left while others leaned right. 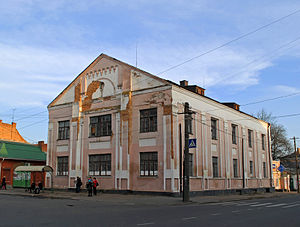 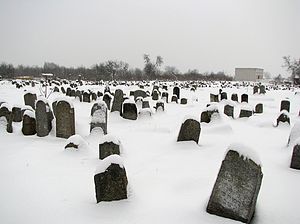 Jewish cemetery
See also: History of the Jews in Ukraine

According to the census of 1789, the Jews constituted 75% of Berdychiv's population (1,951 out of 2,640, of whom 246 were liquor-dealers, 452 houseowners, 134 merchants, 188 artisans, 150 clerks and 56 idlers). In 1797, Prince Radziwill granted seven Jewish families the monopoly privilege of the cloth trade in the town. Jews were a major driving force of the town's commerce in the first half of the 19th century, founding a number of trading companies (some traded internationally), banking establishments, and serving as agents of the neighboring estates of Polish nobility (szlachta).

By the end of the 18th century, Berdychiv became an important center of Hasidism. As the town grew, a number of noted scholars served as rabbis there, including Lieber the Great, Joseph the Harif and the Tzadik Levi Yitzchok of Berditchev (the author of Kedushat Levi), who lived and taught there until his death in 1809. See also Berditchev (Hasidic dynasty).

In its heyday, Berdychiv accounted some eighty synagogues and batei midrash, and was famous for its cantors.

Berdychiv was also one of the centers of the conflict between Hasidim and Mitnagdim. As the ideas of Haskalah influenced parts of the Jewish communities, a large group of Maskilim formed in Berdychiv in the 1820s.

Until World War I, the natural growth was balanced by the emigration. During the 1917 October Revolution and Russian Civil War, the mayor of the town was the Bundist leader D. Lipets. In early 1919, the Jews of Berdychiv became victims of a pogrom, and in 1920, the advancing Soviet troops destroyed most of the city by the artillery fire.

The Soviet authorities closed or destroyed most of the town's synagogues.

In the 1920s, the Yiddish language was officially recognized and in 1924, the first in Ukrainian court of law to conduct its affairs in Yiddish was established in the city, but in the 1930s, the use of Yiddish was curtailed and all Jewish cultural activities were suspended before World War II.

Most civilians from areas near the border did not have a chance to evacuate when the Nazis began their invasion on June 22, 1941. Berdychiv was occupied by the German Army from July 7, 1941 to January 5, 1944. An "extermination" German SS unit was established in Berdychiv in early July 1941 and a Jewish ghetto was set up. It was liquidated on October 5, 1941, when all the inhabitants were murdered. Eyewitnesses stated that Ukrainian auxiliary police aided the 25-member shooting squad in corralling Jews into the ghetto, policing it, and killing those who attempted to escape.[3] One witness to a mass killing of Jews in Berdychiv stated, "They had to wear their festivity-dresses. Then, their clothes and valuables were taken. The pits were dug and filled in by war prisoners who were executed shortly after."[4]

Some sources erroneously claim that the great pianist Vladimir Horowitz was born in Berdychiv. However, Horowitz's birth certificate unequivocally states Kiev as his birthplace.[6]