The Berliner Rundfunk was established in 1945 by the Soviet Military Administration in Germany. It initially broadcast from the Haus des Rundfunks building of the former Reichs-Rundfunk-Gesellschaft (Reich-Radio Association) GmbH on Masurenallee in Berlin-Charlottenburg. It is notable that this broadcaster was located in the British sector of what was to become West Berlin. The station was merged with the regional broadcasters in Potsdam and Schwerin as well as the broadcast studio in Rostock. 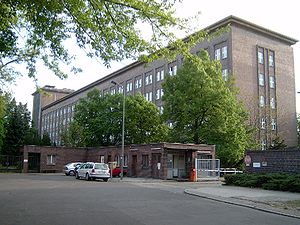 In the course of the centralization of the German Democratic Republic (GDR) in 1952, in which among other things five Länder were eliminated, the status of East German radio changed. In the meantime, the new radio headquarters of the Rundfunk der DDR was established on Nalepastraße in Oberschöneweide, East Berlin. After 1952, all radio programs in the GDR emanated from there. The Berliner Rundfunk was changed to the program Berlin I with a political focus and allotted the transmitters in Schwerin and Weimar. The program also took over the shortwave transmission of the previous Deutschlandsender.

In connection with the unification of the two German states, the Berliner Rundfunk ceased its transmission in February 1990. In Berlin an identically named private radio program broadcast on the VHF frequency 91.4 MHz. The other open frequencies of the Berliner Rundfunk were taken over by regional programs of the newly created Länder.