Bertram Arthur "Jimmy" James, MC, RAF (17 April 1915 – 18 January 2008) was a British survivor of The Great Escape. He was an officer of the Royal Air Force, ultimately reaching (some years after the Great Escape) the rank of Squadron Leader.

James was born in India, the son of a tea-planter, and was educated at The King's School, Canterbury. He worked in British Columbia from 1934 until volunteering for pilot training with the RAF in 1939 after seeing a recruiting poster in Vancouver.[1][2]

James was initially commissioned as an acting pilot officer, and was promoted to pilot officer (on probation) on 9 December 1939.[3] That rank was confirmed on 28 February 1941 (back-dated to 1 May 1940) when he was also promoted to war substantive flying officer with effect from 9 December 1940.[4][5]

James was posted to No. 9 Squadron RAF at RAF Honington in April 1940 after completing his flying training.[2] He was shot down over the Netherlands on 5 June 1940 while second pilot of a Wellington bomber and taken prisoner. 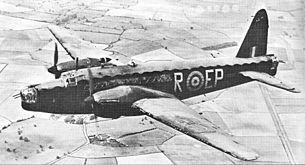 The Merlin-engined Wellington Mark II. This aircraft actually belongs to No. 104 Sqn. Notice the criss-cross geodesic construction through the perspex fuselage panels.

Over the next five years, he made 13 efforts to escape from various prisons and camps, including Stalag Luft III, the site in January 1944 of the so-called Great Escape. James took part in this, disguised as a worker at a wood mill, but was among the 73 of the 76 escapers who were eventually recaptured. Fifty were then executed, James being one of a handful sent instead to the Sachsenhausen concentration camp.

Along with more than 130 other prominent inmates he was transferred to Tyrol in April 1945 and finally liberated by American troops in May 1945. 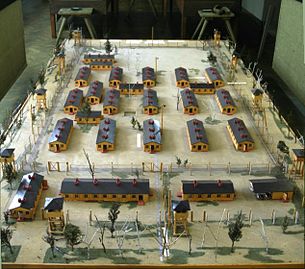 At the end of the war he was awarded the Military Cross (MC) and Mentioned in Despatches[6] for his repeated escape attempts. The citation for his MC was published in a supplement to the London Gazette of 14 May 1946 (dated 17 May 1946) and read:[7]

The KING has been graciously pleased to approve the following awards: —

On the night of 5th June, 1940, Flight Lieutenant James was the 2nd pilot of a Wellington aircraft which was hit by enemy anti-aircraft fire and had to be abandoned whilst over the Netherlands. He made a successful parachute descent some 25 miles south of Rotterdam, disposed of his equipment, and evaded some people who were approaching, but subsequently was captured by the Germans. He was held at Oberursel for four days for interrogation. Later he was sent to Stalag Luft I at Barth from which camp he made an attempt to escape during an air raid on 21st October, 1941. His attempt, which was made after a tunnel had been constructed, was unsuccessful and as a punishment he received 14 days solitary confinement. In November, 1941, he was discovered whilst engaged in the construction of a second tunnel, and was sentenced to another 14 days solitary confinement. While at Stalag Luft I, he worked on the construction of at least five other tunnels, all without success. His next attempt was made whilst at Stalag Luft III (Sagan) in July, 1942, when he, with another prisoner, managed to slip away from a sick parade and hide in a cow shed. Here they began to construct another tunnel, but were discovered when it was 21 feet long. For this, Flight Lieutenant James served a sentence of 14 days in the cells. In April, 1943, he, with others, commenced the construction of a tunnel which resulted in the escape of 76 officers, but unfortunately 50 R.A.F. officers were shot by the Germans whilst endeavouring to get away. Flight Lieutenant James, however, managed to leave with civilian clothes and forged documents and, together with eleven others, entrained for Boberohrsdorf, arriving there the next morning. Here the party decided to split up into pairs. Flight Lieutenant James and his companion walked across country towards Hirschberg[disambiguation needed], but were apprehended by German Police. Flight Lieutenant James was eventually sent to Sachsenhausen Concentration Camp where, with others, in May, 1944, he commenced the construction of a tunnel some hundred feet in length, and 10 feet below the surface. On 23 September 1944, he and four others escaped through this tunnel. Flight Lieutenant James and a companion made their way towards Rostock, but were arrested by members of the German Home Guard who returned them to the Concentration Camp where they were put in cells. Flight Lieutenant James remained in the cells from 6 October 1944, until 15 February 1945. He was ultimately liberated by the Allied forces on 6 May 1945.

After the war, James was initially transferred to the reserve, but retained on active service,[8][9] but was later granted a regular commission in the RAF (though in a non-flying role).[10] On 9 December 1952 he transferred to the RAF Regiment,[11] and retired as a squadron leader on 11 June 1958.[12]

He was general-secretary of the Foreign and Commonwealth Office sponsored Great Britain-USSR Association, until joining the Diplomatic Service in 1964. He subsequently held posts in Africa, Western and Eastern Europe and London. After retiring in 1975, he visited Sachsenhausen with Jack Churchill and other survivors of the camp. He also toured the country talking about his wartime experiences, and was President of "Project 104", a charitable venture to create a replica of hut 104 at Stalag Luft III, from where the escape tunnel started.[2] He served as the British representative on the International Sachsenhausen Committee until shortly before his death at the age of 92 at the Royal Shrewsbury Hospital on 18 January 2008.

His funeral was held at St Peter's Catholic Church, Ludlow on 31 January 2008. A party of RAF Regiment gunners from RAF Honington served as pallbearers, other personnel from the Defence College of Aeronautical Engineering at Cosford were also present, as was Air Commodore Bob McAlpine, a former CO of No. 9 Squadron. Four Tornado GR4s of 9 Squadron performed a flypast in the missing man formation.[2]