A beth din [bet ˈdin], bet din, beit din or beis din (Hebrew: בית דין‎, "house of judgment"; plural battei din) is a rabbinical court of Judaism. In ancient times, it was the building block of the legal system in the Biblical Land of Israel. Today, it is invested with legal powers in a number of religious matters (din Torah, "matter of litigation", plural dinei Torah) both in Israel and in Jewish communities in the Diaspora, where its judgments hold varying degrees of authority (depending upon the jurisdiction and subject matter) in matters specifically related to Jewish religious life.

Commentators point out that the first suggestion in the Torah that the ruler divest his legal powers and delegate his power of judgment to lower courts was made by Jethro to Moses (Exodus 18:14–26). This situation was formalised later when God gave the explicit command to "establish judges and officers in your gates" (Deuteronomy 16:18).

There were three types of courts (Mishnah, tractate Sanhedrin 1:1-4 and 1:6):

File:Tomb of Judah II and his Beth Din ap 004.jpg
Beth din of Judah II from the third century.

Participation in these courts required the classical semicha, the transmission of judicial authority in an unbroken line down from Moses. Since the destruction of the Temple in Jerusalem in 70 CE, or at the latest the abolition of the position of Nasi in 425 CE, the transmission of semicha has been suspended. Attempts in the 16th century to reinstate the semicha were unsuccessful; Rabbi Yosef Karo was one of the recipients of this semicha.

The Mishnah and Talmud distinguish between ritual or criminal matters and monetary matters (issurim and mamonoth) and impose different regulations for them, with criminal cases generally having much more stringent limitations. Courts ruled in both kinds of cases. Any question that could not be resolved by a smaller court was passed up to a higher court. If the Sanhedrin was still uncertain, divine opinion was sought through the Urim ve-Tumim (the parchment in the High Priest's breastplate, which was inscribed with the Name of God and could give supernatural clues).

Given the suspension of semicha, any beth din existing in medieval or modern times is in theory a court of laymen, acting as arbitrators. In practice they are given greater powers than this by the local takkanot ha-kahal (community regulations), and are generally composed of experienced rabbis. Modern training institutes, especially in Israel, confer a qualification of dayan (religious judge) which is superior to the normal rabbinical qualification.

Even though normally an Orthodox beth din requires a minimum of three Jews knowledgeable and observant of Halakha (Jewish Law), in new communities and exigencies, providing a thorough search has proved unfruitful, halakhah provides that even one Orthodox Jew can establish a beth din, since every Orthodox community is required to establish its own beth din.[citation needed] 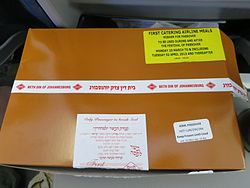 Kosher meal approved by the Beth din of Johannesburg

In Orthodox Judaism, a beth din consists of three observant Jewish men, at least one of whom is widely knowledgeable in Jewish law (halakha), to be capable of instructing the other members in any matters of halakha relevant to the case being heard.[1] In progressive communities, women may serve on the beth din as well.[2]

In practice, a permanent beth din will consist of three rabbis, while a beth din for an occasional matter (such as handling religious vows) need not consist of rabbis. A beth din which handles cases involving complex monetary issues or large community organizations requires "judges" (dayanim, singular: dayan), who require an additional semicha (yadin yadin) which enables them to participate in such a beth din and adjudicate complex cases involving highly technical points of law.

A beth din is required or preferred for the following matters:

A beth din is sometimes used within the Orthodox Jewish community to resolve civil disputes, with the Shulkhan Arukh[3] calling for civil cases being resolved by religious instead of secular courts (arka'oth). Modern Western societies increasingly permit civil disputes to be resolved by private arbitration, enabling religious Jews to enter into agreements providing for arbitration by a particular beth din in the event of a dispute. By this device, the rules, procedures, and judgment of the beth din are accepted and can be enforced by secular courts in the same manner as those of a secular arbitration association. However, the decisions of religious courts cannot be binding without the prior agreement of both parties, and will otherwise act only as mediation.[citation needed]

Officers of a beth din

A large beth din may have the following officers: