Betty Sutton lost her 2012 re-election campaign after she was redistricted to the 16th District, losing to fellow incumbent Jim Renacci in the Republican leaning district.

On July 24, 2013, the White House announced that Sutton would be appointed administrator of the Saint Lawrence Seaway Development Corporation. The agency is headquartered in Washington, D.C., and is a government owned corporation that operates and maintains the U.S. portion of the St. Lawrence Seaway between the Port of Montreal and Lake Erie.[1]

Sutton was born and raised the youngest of six children in Barberton, just outside Akron. She attended public schools, going on to graduate from Kent State University with a degree in political science. Sutton went on to study for a Juris Doctor at the University of Akron School of Law, where she received a Dean's Club Scholarship and earned both the American Jurisprudence Award and Federal Bar Association Award for Outstanding Performance in Constitutional Law.[2]

During her first year of law school, Sutton successfully ran for her first public office which earned her an at-large seat on the Barberton City Council in 1990.[2]

A year later, Sutton was appointed to fill an at-large seat on the Summit County Council, where she served until 1992. During her second year in office, Sutton was elected vice president of the council.[2]

In 1992, at age 29, she was the youngest woman ever to be elected to the Ohio House of Representatives.[3] She served for eight years and could not run again due to term limits.[3]

In 2006, Sutton successfully ran for the seat vacated by Sherrod Brown in the U.S. House of Representatives in Ohio's 13th congressional district. 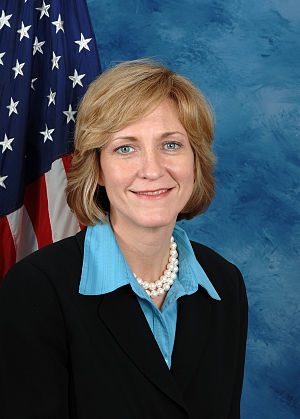 Sutton was also recognized as a "key House architect" in the American Clean Energy and Security Act that passed the House in June 2009.[4] An amendment she offered established the "Cash for Clunkers" program. Sutton received wide media attention in 2009 as a result of her lead sponsorship of the Consumer Assistance to Recycle and Save Act, which mandated the "Cash for Clunkers" program that went into effect during the summer of 2009.[5] Her 2010 Republican opponent, Tom Ganley, sold 876 cars under this program.[6] At the time, August 2009, his only complaint was about the speed of payment.[7]

Sutton was the lead sponsor of the Josh Miller HEARTS Act, which mandates that the Department of Education provide funding to local schools for the purchase of automated external defibrillators (AEDs).[8] The bill was named after one of Sutton's constituents, a 15-year-old honor student, football player, and wrestler from Barberton, Ohio who collapsed and died on the football field after suffering from sudden cardiac arrest.[9]

Other bills that Sutton has sponsored include the Protect Consumers Act of 2009, which calls for stricter action to protect consumers in the event of a product's mandatory recall by the FDA,[10] the Disability Equity Act, which eliminates the 5-month waiting period currently in place for Social Security disability benefits,[11] and the Contractor Accountability Act, which tightens public oversight of federal expenditures.[12]

Sutton participated in an Occupy Wall Street rally in New York in October 2011.[15]

She supported the federal government bail out for the auto industries in 2009.[16]

After sitting Rep. Sherrod Brown of Ohio's 13th congressional district declared his intention to run against Mike DeWine for his seat in the U.S. Senate, Betty Sutton took part in the Democratic primary for his open seat. She defeated notables such as former U.S. Rep. Thomas C. Sawyer, who had previously been redistricted out of Congress, and Capri Cafaro, who had run against Rep. Steven LaTourette in the neighboring 14th District during the previous election cycle. Sutton capitalized on the anti-corruption theme of Ohio's 2006 elections to make a strong showing late in the primary season, and held it to win the primary with the strong support of organized labor.

Sutton went on to win the November general election against Craig L. Foltin, the Republican mayor of Lorain, Ohio. The Republicans had high hopes for Foltin, who was the popular Republican mayor of a heavily Democratic city,[17] and despite the local newspaper Akron Beacon Journal's reluctant endorsement of Foltin,[18] Sutton defeated him 61.22 percent to 38.78 percent, or 135,639 votes to 85,922 votes.

Sutton endorsed Hillary Clinton during the 2008 Democratic primaries after Clinton won the Ohio primaries, stating that she was following the lead of her constituents.[20] Sutton went on to campaign for Barack Obama after he secured the nomination.[21]

The Plain Dealer reported in September 2011 that the new district map of Ohio would dismantle Sutton's district and place her home in "a largely Republican district that's being constructed to favor the re-election of freshman GOP Rep. Jim Renacci of Wadsworth."[22] In December, Sutton filed to run against Renacci.[23] Later that month, Roll Call reported that a poll taken at least two months earlier showed the two congress members "neck and neck at 45 percent."[24] On the Washington Post's list of top 10 House races in 2012, Sutton's was at #8.[25]

According to the Sunlight Foundation, Sutton has the highest staff turnover rate in the House.[26] "The group's examination of House pay records for two years ending in the third quarter of 2011." reported the Plain Dealer, "found that just 19 percent of Sutton's staffers remained throughout the period. The average House office had a 64.2 percent retention rate during that time, the study found."[27]

Renacci defeated Sutton by a 52% to 48% margin on Election Day.

Within the course of her eight-year tenure as part of the Ohio House of Representatives Betty Sutton voiced her opinion on the ever growing importance of education. Ms. Sutton supported the remodeling and repairing of worn down schools as well as modernizing older schools. These renovations were possible through increasing the maximum amount given through the Pell Grant. By expanding the Pell Grant the 13th Congressional District of Ohio was able to prevent teacher layoffs and provided for additional funding towards special needs programs. Through The Student Aid and Fiscal Responsibility Act (SAFRA), which the Congresswomen voted for, the 13th district was allowed the ability for greater access to affordable college. The district was also given a chance to build a strong community college system. Congresswomen Sutton finally demonstrated her intense ideals on education through her participation in the Community College Caucus, the Green Schools Caucus, the House Afterschool Caucus, and the STEM (Science, Technology, Engineering, and Math) Caucus.[28]

Betty Sutton had a good deal of experience dealing with Energy and Environment issues through her participation in the House Renewable Energy and Energy Efficiency Caucus. In the realm of energy Betty Sutton supported the company BASF in its pursuit of more advanced lithium-ion battery. Support also went towards the production of this battery from a facility in Elyria, bringing technology jobs back to the locals. Lithium-ion batteries are used in hybrid and electric can and have to power to increase reusable energy across the nation. Another energy achievement made in district 13 was the Cash for Clunkers legislation. This specific legislation created a 58% improvement in fuel efficiency. Cars brought in averaged 15.8 MPG while the new cars that were bought as a replacement averaged 24.9 MPG. These roughly 10 miles to every gallon saved helped to keep our environment a little more clean, even if it seems small. In issues dealing with environment the Congresswomen hdemonstrated numerous times her ideals on protecting the natural resources and national parks we have. One of the ways Ms. Sutton demonstrated her position on environment was through her acquisition of over 630 acres of undeveloped land to be added to the Cuyahoga Valley National Park (CVNP). With the new addition to the CVNP it was ensured that the lands would be able to continue untouched for years to come.[29]

One of Congresswomen Sutton’s greatest aspirations in the field of Health Care was providing access to affordable quality care and putting an end to the discriminatory practices by insurance companies. In her past tenure Ms. Sutton voted for the Patient Protection and Affordable Care Act, which passed and officially became a law on March 23, 2010. This Act provides those with insurance the reassurance that their claims cannot be delayed or possibly denied and those without insurance more access to affordable insurance. The Act also helps to curb cost of insurance to families, businesses, and the government and it calls for the preservation of Medicare. Betty Sutton also worked to pass the State Children’s Health Insurance Program (SCHIP) to provide insurance to families with children who cannot afford personal insurance. It is speculated that the SCHIP helps to insure about 11 million children who come from low-income families throughout the nation. In congress Betty Sutton worked on health care issues in the House School and Health Safety Caucus and the Congressional Task Force on Seniors.[30]

Sutton is an attorney specializing in labor law. Between her time in the Ohio and United States legislatures, Sutton worked as a labor lawyer with the firm of Faulkner, Muskovitz & Phillips LLP (FMP).[2]

She currently lives in Copley Township with her husband Doug Corwon, a mediator with the Federal Mediation and Conciliation Service.[31]