Bhakti (Sanskrit: भक्ति) literally means "attachment, participation, devotion to, fondness for, homage, faith or love, worship, piety to (as a religious principle or means of salvation)".[1] Bhakti, in Hinduism, refers to devotion and the love of a personal god or a representational god by a devotee.[2][3] In ancient texts such as the Shvetashvatara Upanishad, the term simply means participation in, devotion, and love for any endeavor, or it refers to one of the possible paths of spirituality and moksha as in bhakti marga mentioned in the Bhagavad Gita.[4] The term also refers to a movement that arose between the 7th century and 10th century CE in India, focused on the gods Vishnu and Shiva, possibly in response to the arrival of Islam in India.[2][3]

The Bhakti movement reached North India in the Delhi Sultanate and grew throughout the Mughal era evolving the characteristics of Hinduism as the religion of the general population as dhimmi, under the Islamic rulers in parts of the Indian subcontinent.[5] Bhakti-like movements also spread to other Indian religions during this period,[6][7][8] and it influenced the interaction between Christianity and Hinduism in the modern era.[9][10]

The term bhakti, in modern era, is used to refer to any tradition of Hindu devotionalism, including Shaivism, Vaishnavism, or Shaktism.[11] The Bhakti movement rose in importance during the medieval history of Hinduism, starting with Southern India with the Vaisnava Alvars and Shaiva Nayanars,[2] growing rapidly therefrom with the spread of bhakti poetry and devotion throughout India by the 12th-18th century CE.[12][13] The Bhagavata Purana is a text associated with the Bhakti movement which elaborates the concept of bhakti as found in the Bhagavad Gita.[14]

Along with Hinduism, nirguni Bhakti (devotion to the divine without attributes) is found in Sikhism.[15][16]

The Sanskrit word bhakti is derived from the root bhaj, which means "divide, share, partake, participate, to belong to".[14][17][18] The word also means "attachment, devotion to, fondness for, homage, faith or love, worship, piety to something as a spiritual, religious principle or means of salvation".[1][19]

The meaning of the term Bhakti is analogous but different than Kama. Kama connotes emotional connection, sometimes with sensual devotion and erotic love. Bhakti, in contrast, is spiritual, a love and devotion to religious concepts or principles, that engages both emotion and intellection.[20] Karen Pechelis states that the word Bhakti should not be understood as uncritical emotion, but as committed engagement.[20] She adds that, in the concept of bhakti in Hinduism, the engagement involves a simultaneous tension between emotion and intellection, "emotion to reaffirm the social context and temporal freedom, intellection to ground the experience in a thoughtful, conscious approach".[20] One who practices bhakti is called a bhakta.[21]

The term bhakti, in Vedic Sanskrit literature, has a general meaning of "mutual attachment, devotion, fondness for, devotion to" such as in human relationships, most often between beloved-lover, friend-friend, king-subject, parent-child.[14] It may refer to devotion towards a spiritual teacher (Guru) as guru-bhakti,[22][23] or to a personal god,[14][24] or for spirituality without form (nirguna).[25]

The term Bhakti also refers to one of several alternate spiritual paths to moksha (spiritual freedom, liberation, salvation) in Hinduism,[26] and it is referred to as bhakti marga or bhakti yoga.[27][28] The other paths are Jnana marga (path of knowledge), Karma marga (path of works), Rāja marga (path of contemplation and meditation).[26][29]

The term bhakti has been usually translated as "devotion" in Orientalist literature.[30] The colonial era authors variously described Bhakti as a form of mysticism or "primitive" religious devotion of lay people with monotheistic parallels.[31][32][33] However, modern scholars state "devotion" is a misleading and incomplete translation of bhakti.[34][35] Many contemporary scholars have questioned this terminology, and most now trace the term bhakti as one of the several spiritual perspectives that emerged from reflections on the Vedic context and Hindu way of life. Bhakti in Indian religions is not a ritualistic devotion to a god or to religion, but participation in a path that includes behavior, ethics, mores and spirituality.[34] It involves, among other things, refining one's state of mind, knowing god, participating in god, and internalizing god.[34] Increasingly, instead of "devotion", the term "participation" is appearing in scholarly literature as a gloss for the term bhakti.[34][35]

David Lorenzen states that bhakti is an important term in Sikhism and Hinduism.[15] They both share numerous concepts and core spiritual ideas, but bhakti of nirguni (devotion to divine without attributes) is particularly significant in Sikhism.[15][16][36] In Hinduism, diverse ideas continue, where both saguni and nirguni bhakti (devotion to divine with or without attributes) or alternate paths to spirituality are among the options left to the choice of a Hindu.[15][26]

"Bhakthi" is also used as a unisex name.

The last of three epilogue verses of the Shvetashvatara Upanishad, dated to be from 1st millennium BCE, uses the word Bhakti as follows,

He who has highest Bhakti of Deva (God),
just like his Deva, so for his Guru (teacher),
To him who is high-minded,
these teachings will be illuminating.

This verse is one of the earliest use of the word Bhakti in ancient Indian literature, and has been translated as "the love of God".[31][40] Scholars[41][42] have debated whether this phrase is authentic or later insertion into the Upanishad, and whether the terms "Bhakti" and "Deva" meant the same in this ancient text as they do in the modern era. Max Muller states that the word Bhakti appears only once in this Upanishad, that too in one last verse of the epilogue, could have been a later addition and may not be theistic as the word was later used in much later Sandilya Sutras.[43] Grierson as well as Carus note that the first epilogue verse 6.21 of the Shvetashvatara Upanishad is also notable for its use of the word Deva Prasada (देवप्रसाद, grace or gift of God), but add that Deva in the epilogue of the Shvetashvatara Upanishad refers to "pantheistic Brahman" and the closing credit to sage Shvetashvatara in verse 6.21 can mean "gift or grace of his Soul".[31]

Scholarly consensus sees bhakti as a post-Vedic movement that developed primarily during the Epics and Puranas era of Indian history.[44][45] The Bhagavad Gita is the first text to explicitly use the word "bhakti" to designate a religious path, using it as a term for one of three possible religious approaches.[46] The Bhagavata Purana develops the idea more elaborately,[14] while the Shvetashvatara Upanishad presents evidence of guru-bhakti (devotion to one's spiritual teacher).[27][47]

The Bhakti Movement was a rapid growth of bhakti, first starting in the later part of 1st millennium CE, from Tamil Nadu in Southern India with the Saiva Nayanars[13] and the Vaisnava Alvars. Their ideas and practices inspired bhakti poetry and devotion throughout India over the 12th-18th century CE.[12][13] The Alvars ("those immersed in God") were Vaishnava poet-saints who wandered from temple to temple singing the praises of Vishnu. They established temple sites (Srirangam is one) and converted many people to Vaishnavism.[13]

Like the Alvars the Saiva Nayanar poets were influential. The Tirumurai, a compilation of hymns by sixty-three Nayanar poets, is still of great importance in South India. Hymns by three of the most prominent poets, Appar (7th century CE), Campantar (7th century) and Cuntarar (9th century), were compiled into the Tevaram, the first volumes of the Tirumurai. The poets' itinerant lifestyle helped create temple and pilgrimage sites and spread devotion to Shiva.[48] Early Tamil-Siva bhakti poets are quoted the Black Yajurveda.[49] The Alwars and Nayanmars were instrumental in propagating the Bhakti tradition. The Bhagavata Purana's references to the South Indian Alvar saints, along with its emphasis on bhakti, have led many scholars to give it South Indian origins, though some scholars question whether this evidence excludes the possibility that bhakti movement had parallel developments in other parts of India.[50][51]

Scholars state that the bhakti movement focussed on the gods Vishnu, Shiva, Shakti and other deities, that developed and spread in India, was in response to the arrival of Islam in India about 8th century CE,[52] and subsequent religious violence.[2][3][53] This view is contested by other scholars.[53]

The Bhakti movement swept over east and north India from the fifteenth-century onwards, reaching its zenith between the 15th and 17th century CE.[54] Bhakti poetry and ideas influenced many aspects of Hindu culture, religious and secular, and became an integral part of Indian society.[13] It extended its influence to Sufism,[55] Christianity,[7] and Jainism.[8] Sikhism was founded by Nanak in the 15th century, during the bhakti movement period, and scholars call it a Bhakti sect of Indian traditions.[56]

The movement has traditionally been considered as an influential social reformation in Hinduism, and provided an individual-focussed alternative path to spirituality regardless of one's caste of birth or gender.[54] Postmodern scholars question this traditional view and whether Bhakti movement ever was a social reform or rebellion of any kind.[57] They suggest Bhakti movement was a revival, reworking and recontextualization of ancient Vedic traditions.[58]

The Bhagavad Gita, variously dated to have been composed in 5th to 2nd century BCE,[61] introduces bhakti yoga in combination with karma yoga and jnana yoga,[62][63] while the Bhagavata Purana expands on bhakti yoga, offering nine specific activities for the bhakti yogi.[64] Bhakti in the Bhagavad Gita offered an alternative to two dominant practices of religion at the time: the isolation of the sannyasin and the practice of religious ritual.[65] Bhakti Yoga is described by Swami Vivekananda as "the path of systematized devotion for the attainment of union with the Absolute".[66] In various chapters, including the twelfth chapter of the Bhagavad Gita, Krishna describes bhakti yoga as one of the paths to the highest spiritual attainments.[67] In the sixth chapter, for example, the Gita states the following about bhakti yogin,[68]

The yogin who, established in oneness, Honors Me as abiding in all beings,
In whatever way he otherwise acts, Dwells in Me.

He who sees equality in everything, In the image of his own Self, Arjuna,
Whether in pleasure or in pain, Is thought to be a supreme yogin.

Of all yogins, He who has merged his inner Self in Me,
Honors me, full of faith, Is thought to be the most devoted to Me. 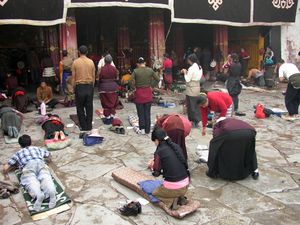 Bhatti (Bhakti in Pali) at a Buddhist temple, Tibet. Chanting during Bhatti Puja (devotional worship) is often a part of the Theravada Buddhist tradition.

Bhakti has been a prevalent ancient practice in various Jaina sects, wherein learned Tirthankara (Jina) and human gurus have been venerated with offerings, songs and Āratī prayers.[90]

Bhakti (called Bhatti in Pali) has been a common practice in Theravada Buddhism, where offerings and group prayers are made to Buddhist icons and particularly images of Buddha.[91][92] Karel Werner notes that Bhakti has been a significant practice in Theravada Buddhism, and states, "there can be no doubt that deep devotion or bhakti / bhatti does exist in Buddhism and that it had its beginnings in the earliest days".[93]