The Białystok Ghetto[1] (Polish: getto w Białymstoku) was a World War II Jewish ghetto set up by Nazi Germany in the newly formed capital of Bezirk Bialystok district of German-occupied Poland between July 26 and early August 1941. About 50,000 Jews from the vicinity of Białystok and the surrounding region were herded into a small area of the city. The ghetto was split in two by the Biała River running through it (see map). Most inmates were put to work in the forced-labor enterprises for the German war effort, primarily in large textile, shoe and chemical factories established within its boundaries. The ghetto was liquidated in November 1943 after the courageous Białystok Ghetto Uprising was crushed.[2] All its inhabitants were either killed locally or transported in cattle trucks to the Majdanek and Treblinka extermination camps.[3]

The city of Białystok was overrun by the Wehrmacht on September 15, 1939, and a week later ceded to the invading Red Army in accordance with the Nazi–Soviet demarcation treaty. On September 27, 1939, it was annexed by the Soviet Union following mock elections conducted in the atmosphere of utter terror.[4][5] According to the terms of the German-Soviet Pact signed earlier in Moscow, Białystok remained in Soviet hands until June 1941, assigned to the Belorussian Soviet Socialist Republic. Thousands of Jews flocked to the city from German-occupied Poland. Mass deportations to Siberia by the NKVD followed.[6]

The German army entered the Soviet occupation zone on June 22, 1941 under the codename Operation Barbarossa and took over the city within days. On June 27–28, 1941 the Reserve Police Battalion 309 arrived,[7] and the first mass murder of Polish Jews took place during the so-called "Red Friday" which took the lives of up to 5,000 victims.[6] The Great Synagogue was set on fire with 800 to 1,000 Jewish men locked in it, and burned down with a grenade thrown inside. It was followed by a frenzy of killing by the German Battalion 309 both inside the homes of the Jewish neighbourhood of Chanajki,[6] and in the park, lasting until dark. The next day, some 30 wagon-loads of dead bodies were taken to a new mass grave outside the town, dug up on German orders, but the number of victims in the official report was cut in half.[7]

Creation of the Ghetto 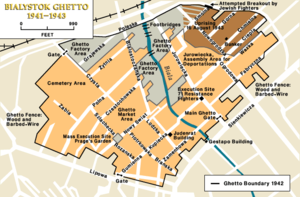 Himmler visited Białystok on June 30, 1941 during the formation of the new Bezirk district and pronounced that there is a high risk of Soviet guerilla activity in the area, with Jews being of course immediately suspected of helping them out. The mission to destroy the alleged NKVD collaborators was assigned to Einsatzgruppe B under the command of SS-Gruppenführer Arthur Nebe aided by Kommando SS Zichenau-Schroettersburg under Hermann Schaper and Kommando Bialystok led by Wolfgang Birkner summoned from the General Government on orders from the Reich Main Security Office.[8] In the early days of the German occupation, these mobile killing units rounded up and killed thousands of Jews in and around Białystok. On July 12, 1941 (dubbed the "Black Saturday") about 2,000–5,000 men were killed in the fields of nearby Pietrasze village in an assembly-line-style, likely due to suspicions of helping the enemy.[6]

The Ghetto was officially created on July 26, 1941 along the streets of Lipowa, Przejazd, Poleska and Sienkiewicza, and closed from the outside on August 1, 1941. It was surrounded by a wall with three guarded entrances. The Judenrat was formed, headed by Efraim Barasz. Within a brief period of time the Ghetto had up to 60,000 Jewish prisoners in it. Textile and armament factories were established with the help of Judenrat, along with soup kitchens, first aid sites and other amenities. Food rations were strictly enforced.[2][6]

On February 5–12, 1943, the first group of approximately 10,000 Białystok Jews were rounded up by the mobile battalions and sent to their deaths in Holocaust trains at the Treblinka extermination camp. Another 2,000 victims just too weak or sick to run for the wagons were shot on the spot.[6] Approximately 7,600 inmates were relocated into a new central transit camp within the city for further selection. Those fit to work were sent to the Majdanek camp. In Majdanek, after another screening for ability to work, they were transported to the Poniatowa concentration camp, Blizyn, as well as Auschwitz labor and extermination camp. Those deemed too emaciated to work were murdered in Majdanek gas chambers. More than 1,000 Jewish children were sent first to the Theresienstadt ghetto in Bohemia, and then to Auschwitz-Birkenau, where they were killed. Only a few months later, as part of Aktion Reinhard, on August 16, 1943 the ghetto was raided by regiments of the German SS with Ukrainian, Estonian, Latvian and Belorussian auxiliaries (Hiwis), known as Trawniki-men aiming at the ghetto's final destruction.[2]

Faced with the final deportations, when all hope for survival was abandoned, the ghetto underground staged an uprising against the Germans. In the night of August 16, 1943, several hundred Polish Jews began an armed insurrection against the troops carrying out the liquidation of the Ghetto.[2]

Holocaust survivor and postwar historian Szymon Datner wrote: "The blockade of the ghetto lasted one full month and on September 15, 1943, after the last of the flames of resistance had been extinguished, the SS units retreated." The final stage of mass deportations commenced.[2] Only about one hundred Jews managed to escape and join various partisan groups in the Białystok area including Soviet. The Red Army overrun Białystok in August 1944.

There were numerous escape and rescue attempts made during the Ghetto liquidation. In February 1943 Leon Grynberg with his daughter Halinka as well as Felicja and Jakub Wajsfeld were saved by Michał and Jadwiga Skalski who lived on the Arian side of Białystok with their 10 years old daughter. Felicja delivered a baby-girl into Jadwiga's hands.[9] Skalskis took in Fruma and Jankiel Rosen, and Aleksander Brener with his daughter Ida as well, seven people altogether. Most survived. Dr. Michael Turek and his brother Menachem escaped deportation and reached the home of Jan and Władysława Smolko who already harbored the Goldzin family of four.[9] Polish Righteous Elzbieta Szyszkiewicz-Burda alias Liza (a professional nurse), used to pull Jews off the street – and out of mortal danger – right into her home, which served as a safe-house and contact place for the Jewish partisan movement.[9] The AK member Marcin Czyżykowski brought in food and medicine into the Ghetto and on the way back took Jewish children to his and his wife Maria's home (up to twelve of them would wait there at a time, for placement with Polish families).[10] Polish Righteous Jan Kaliszczuk kept two Jewish partisans at his home, Judel Pitluk and Aron Lach, and after ghetto liquidation, supplied them with food and medicine and drove them to the forest. Both survived. Many of them kept corresponding after the war.[11]