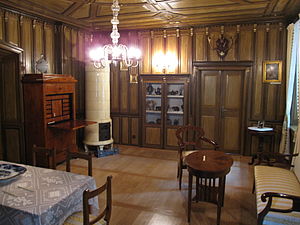 Biedermeier room in the museum of Chrzanów, Poland

The Biedermeier period refers to an era in Central Europe between 1815 and 1848 during which the middle class grew and arts appealed to common sensibilities. It began with the time of the Congress of Vienna at the end of the Napoleonic Wars, and ended with the onset of the European revolutions in 1848. Although the term itself is a historical reference, it is predominantly used to denote the artistic styles that flourished in the fields of literature, music, the visual arts and interior design. 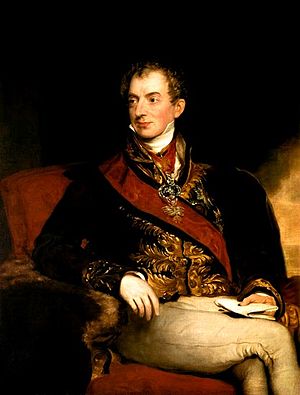 The Concert of Europe ensured by the Austrian chancellor Clemens Wenzel von Metternich enabled a period of peace in which Biedermeier sensibilities developed.

The Biedermeier period does not refer to the era of time as a whole, but to a particular mood and set of trends that grew out of the unique underpinnings of the time in central Europe. There were two driving forces for the development of the period. The first was the growing urbanization and industrialization leading to a new urban middle class, which created a new kind of audience for the arts. The second was the political stability prevalent under Clemens Wenzel von Metternich following the end of the Napoleonic Wars.[1] The effect was for artists and society in general to concentrate on the domestic and (at least in public) the non-political. Writers, painters, and musicians began to stay in safer territory, and the emphasis on home life for the growing middle-class meant a blossoming of furniture design and interior decorating.[2]

The term "Biedermeier" appeared first in literary circles in the form of a pseudonym, Gottlieb Biedermaier, used by the country doctor Adolf Kussmaul and lawyer Ludwig Eichrodt in poems that the duo had printed in the Munich Fliegende Blätter ("Flying Sheets"). The verses parodied the people of the era, namely Samuel Friedrich Sauter, a primary teacher and sort of amateurish poet as depoliticized and petit-bourgeois.[3] The name was constructed from the titles of two poems—"Biedermanns Abendgemütlichkeit" (Biedermann's Evening Comfort) and "Bummelmaiers Klage" (Bummelmaier's Complaint)—which Joseph Victor von Scheffel had published in 1848 in the same magazine.[citation needed] As a label for the epoch, the term has been used since around 1900.

Due to the strict control of publication and official censorship, Biedermeier writers primarily concerned themselves with non-political subjects, like historical fiction and country life. Political discussion was usually confined to the home, in the presence of close friends.

Typical Biedermeier poets are Annette von Droste-Hülshoff, Adelbert von Chamisso, Friedrich Halm, Eduard Mörike, and Wilhelm Müller, the last two of which have well-known musical settings by Hugo Wolf and Franz Schubert respectively. Adalbert Stifter is a novelist and short story writer whose work also reflects the concerns of the Biedermeier movement, particularly with his novel, Der Nachsommer. As historian Carl Schorske puts it, "To illustrate and propagate his concept of Bildung, compounded of Benedictine world piety, German humanism, and Biedermeier conventionality, Stifter gave to the world his novel Der Nachsommer".[4]

As a personality type

A “Biedermann” is characterized as a conservative unimaginative middle-class personality. content, but vulnerable to upset when disturbed by unfavorable social or economic conditions.[5] 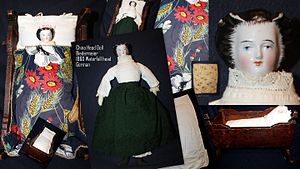 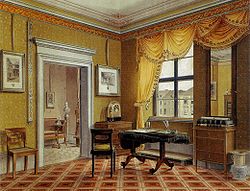 Biedermeier was an influential German style of furniture design that evolved during the years 1815–1848. The period extended into Scandinavia, as disruptions due to numerous states that made up the German nation were not unified by rule from Berlin until 1871. These post-Biedermeier struggles, influenced by historicism, created their own styles. Throughout the period, emphasis was kept upon clean lines and minimal ornamentation consistent with Biedermeier's basis in utilitarian principles. As the period progressed, however, the style moved from the early rebellion against Romantic-era fussiness to increasingly ornate commissions by a rising middle class, eager to show their newfound wealth. The idea of clean lines and utilitarian postures would resurface in the 20th century, continuing into the present day. Middle- to late-Biedermeier furniture design represents a heralding towards historicism and revival eras long sought for. Social forces originating in France would change the artisan-patron system that achieved this period of design, first in the Germanic states and, then, into Scandinavia. The middle class growth originated in the English industrial revolution and many Biedermeier designs owe their simplicity to Georgian lines of the 19th century, as the proliferation of design publications reached the loose Germanic states and the Austro-Hungarian empire.

The Biedermeier style was a simplified interpretation of the influential French Empire Style of Napoleon I, which introduced the romance of ancient Roman Empire styles, adapting these to modern early 19th-century households. Biedermeier furniture used locally available materials such as cherry, ash and oak woods rather than the expensive timbers such as fully imported mahogany. Whilst this timber was available near trading ports such as Antwerp, Hamburg and Stockholm, it was taxed heavily whenever it passed through another principality. This made mahogany very expensive to use and much local cherry and pearwood was stained to imitate the more expensive timbers. Stylistically, the furniture was simple and elegant. Its construction utilised the ideal of truth through material, something that later influenced the Bauhaus and Art Deco periods.

Many unique designs were created in Vienna, primarily because a young apprentice was examined on his use of material, construction, originality of design, and quality of cabinet work, before being admitted to the league of approved master cabinetmakers. Furniture from the earlier period (1815–1830) was the most severe and neoclassical in inspiration. It also supplied the most fantastic forms which the second half of the period (1830–1848) lacked, being influenced by the many style publications from England. Biedermeier furniture was the first style in the world that emanated from the growing middle class. It preceded Victoriana and influenced mainly Germanic-speaking countries. In Sweden, Marshal Bernadotte, whom Napoleon appointed as ambassador to Sweden to sideline his ambitions, abandoned his support for Napoleon in a shrewd political move. Later, after being adopted by the king of Sweden (who was childless), he became Sweden's new king Karl Johan. The Swedish Karl Johan style, similar to Biedermeier, retained its elegant and blatantly Napoleonic style throughout the 19th century.

Biedermeier furniture and lifestyle was a focus on exhibitions at the Vienna applied arts museum in 1896. The many visitors to this exhibition were so influenced by this fantasy style and its elegance that a new resurgence or revival period became popular amongst European cabinetmakers. This revival period lasted up until the Art Deco style was taken up. Biedermeier also influenced the various Bauhaus styles through their truth in material philosophy.

The original Biedermeier period changed with the political unrests of 1845–1848 (its end date). With the revolutions in European historicism, furniture of the later years of the period took on a distinct Wilhelminian or Victorian style.

The term Biedermeier is also used to refer to a style of clock made in Vienna in the early nineteenth century. The clean and simple lines included a light and airy aesthetic, especially in Viennese regulators of the Lanterndluhr and Dachluhr styles.

Biedermeier architecture is marked by simplicity and elegance, exemplified by the paintings of Jakob Alt and Carl Spitzweg. One of the most elegant surviving Biedermeier buildings is the Stadttempel in Vienna. Through the unity of simplicity, mobility and functionality the Biedermeier Neoclassical architecture created tendencies of crucial influence for the Jugendstil—Art Nouveau, the Bauhaus, and the 20th-century architecture. 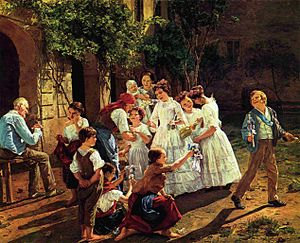 Am Fronleichnamsmorgen by Ferdinand Georg Waldmüller (1857) is an example of Biedermeier paintings evoking harmony, belief and tradition 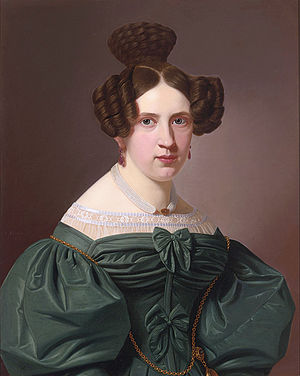 Austrian painting during this era is characterized by the commitment to portray a sentimental and pious view of the world in a realistic way. Biedermeier themes reinforced feelings of security, Gemütlichkeit, traditional pieties and simplicity, eschewing political and social commentary during the epoch.[6] Thus, the techniques, while classic in nature were of the utmost importance to reach a realistic rendering. Regarding the thematic, the technique was seen not only as a narrative medium to tell the past in anecdotal vignettes, but also to represent the present. This formed an aesthetic unity most evidenced in the portraits (e.g., Portrait of the Arthaber Family, 1837, by Friedrich von Amerling), landscapes (e.g. see Waldmüller or Gauermann landscapes) and contemporary-reporting genre scenes (e.g., Controversy of the Coachmen, 1828, by Michael Neder).

The biggest collection of Viennese Biedermeier paintings in the world is currently hosted by the Belvedere Palace Museum in Vienna.[7]

In Denmark, the Biedermeier period corresponds with the "Danish Golden Age" a time of creative production in Denmark, which encompasses the paintings of Christoffer Wilhelm Eckersberg and his students, including Wilhelm Bendz, Christen Købke, Martinus Rørbye, Constantin Hansen, and Wilhelm Marstrand as well as the neoclassical sculpture inspired by the example set by Bertel Thorvaldsen. The period also saw the development of Danish architecture in the Neoclassical style. Copenhagen, in particular, acquired a new look, with buildings designed by Christian Frederik Hansen and by Michael Gottlieb Bindesbøll.[citation needed]

Biedermeier in music is most evident in the numerous publications for in-home music making. Published arrangements of operatic excerpts, German Lieder, and some symphonic works that could be performed at the piano without professional musical training, illustrate the broadened reach of music in this period.