The town was founded in 1032 as Yuriev by Yaroslav the Wise, whose Christian name was Yuri. This event is also traditionally referred as foundation of Tartu, Estonia. The present name of the city, literally translated, is "White Church" and may refer to the (no longer existing) white-painted cathedral of medieval Yuriev. Since 1363 it belonged to the Grand Duchy of Lithuania, and since 1569 to the Polish-Lithuanian Commonwealth. Was granted Magdeburg Rights in 1620 by Sigismund III Vasa.

The Treaty of Bila Tserkva between the Polish-Lithuanian Commonwealth and Ukrainian Cossack rebels under Bohdan Khmelnytsky was signed here in 1651.[4]

Beginning in the second half of the 18th century, Bila Tserkva (Biała Cerkiew), then the seat of the sub-prefecture (starostwo), was the property of the Branicki family. Franciszek Ksawery Branicki, Poland's Grand Hetman, built there his urban residence – the Winter Palace complex and a country residence with the park "Alexandria" (named after his wife). He founded a Catholic church of John the Baptist and started construction of the Orthodox church which was completed by his successor – count Władysław Grzegorz Branicki. The latter one built also the gymnasium-school complex in Bila Tserkva. Aleksander Branicki, the grandson of the hetman, renovated and finished the Mazepa's Orthodox church. Under the rule of count Władysław Michał Branicki, Bila Tserkva developed into a regional commercial and manufacturing centre.[5][6]

Bila Tserkva was annexed into Russian Empire as a result of the Second Partition of Poland in 1793.

After 1861, the Tzarist authorities converted the Roman Catholic church into an Orthodox Church.[7] During the Soviet times Bila Tserkva became a large industrial hub (machine building and construction industry).

During the Cold War, the town was host to the 72nd Guards Krasnograd Motor Rifle Division[9] and the 251st Instructor Heavy Bomber Aviation Regiment of Long Range Aviation.[10] 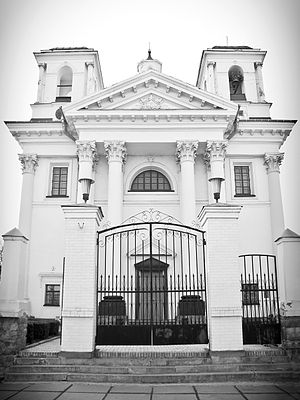 Notable buildings include the merchant court (1809–1814) and the complex of post buildings (1825–31). There are also Palladian wooden buildings of the Branickis' "Winter Palace" and the district nobility assembly. The church of St. Nicholas was started in 1706 but was not completed until 1852. The Orthodox cathedral of the Saviour's Transfiguration was constructed in 1833–1839, while the Catholic Church dates to 1812.

A historical landscape park "Alexandria" of 2 km2 (0.77 sq mi) is situated in Bila Tserkva. It was founded in 1793 by the wife of the Polish hetman Franciszek Ksawery Branicki.

The city is home to football team FC Ros' Bila Tserkva. Ros is a team in the lower levels of the Ukrainian Football League.