From Infogalactic: the planetary knowledge core
Jump to: navigation, search
For the surname, see Bild (surname). 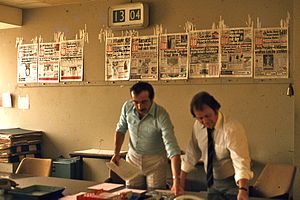 Editors work on producing an issue of Bild, 1977 in West Berlin. Previous front pages are affixed to the wall behind them

The paper is published from Monday to Saturday; on Sundays, its sister paper Bild am Sonntag ("Picture on the Sunday") is published instead, which has a different style and its own editors. Bild is tabloid in style but broadsheet in size. It is the best-selling non-Asian newspaper and has the sixth-largest circulation worldwide.[1]

Bild has been described as "notorious for its mix of gossip, inflammatory language, and sensationalism" and as having a huge influence on German politicians.[2] Its nearest English-language stylistic and journalistic equivalent is often considered to be the British national newspaper The Sun, the second highest selling European tabloid newspaper, with which it shares a degree of rivalry.[3][4][5]

Bild was founded by Axel Springer in 1952. It mostly consisted of pictures (hence the name Bild, German for picture). Bild soon became the best-selling tabloid, by a wide margin, not only in Germany, but in all of Europe, though essentially to German readers. Through most of its history, Bild was based in Hamburg. The paper moved its headquarters to Berlin in March 2008, stating that it was an essential base of operations for a national newspaper.[citation needed] It is printed nationwide with 32 localized editions. Special editions are printed in some favoured German holiday destinations abroad such as Spain, Italy, Turkey and Greece.

Although it is still Germany's biggest paper, the circulation of Bild, along with many other papers, has been on the decline in recent years. By the end of 2005, the figure dropped to 3.8 million copies.[11] Its 2010 circulation was 3,548,000, making the paper the fifth in the list of the world's biggest selling newspapers.[12]

Bild is published in tabloid format.[10] In the paper's beginnings, Springer was influenced by the model of the British tabloid Daily Mirror,[3] although Bild's paper size is larger, this is reflected in its mix of celebrity gossip, crime stories and political analysis. However, its articles are often considerably shorter compared to those in British tabloids, and the whole paper is thinner as well. Bild has been known to use controversial devices like sensational headlines and invented "news" to increase its readership.

In June 2012, Bild celebrated its 60th anniversary by giving away free newspapers to almost all of Germany's 41 million households. Bild said Guinness World Records in Germany has certified the print run as “the largest circulation for the free special edition of a newspaper”.[13]

From the outset, the editorial drift was unabashedly conservative and nationalist. The GDR was referred to as the Soviet Occupation Zone (German: Sowjetische Besatzungszone or SBZ). The usage continued well into the 1980s, when Bild began to use the GDR's official name cautiously, putting it in quotation marks. Bild (along with fellow Springer tabloid B.Z.) heavily influenced public opinion against the German student movement in the years following 1966, and was blamed by some for the climate that contributed to the assassination attempt on activist Rudi Dutschke in 1968—a popular catchphrase in left-wing circles sympathetic to student radicalism was "Bild hat mitgeschossen!" ("Bild shot at him too!").[14] At the height of left-wing terrorism around 1977, Bild took a strong stance that could be said to have contributed to the prevailing climate of fear and suspicion.[citation needed]

After the fall of the Berlin Wall and the end of the Cold War in Europe, Bild's editorial stance seems to have become more centrist. Despite its general support for Germany's conservative parties and especially former chancellor Helmut Kohl, its rhetoric, still populist in tone, is less fierce than it was thirty years ago. Its traditionally less conservative Sunday paper Bild am Sonntag even supported Gerhard Schröder, a Social Democrat, in his bid for chancellor in 1998.

On the day of the election of Joseph Cardinal Ratzinger as Pope Benedict XVI, Bild ran with the now-famous headline "Wir sind Papst" ("We are Pope"). In 2004 Bild started to cooperate with fast-food giant McDonald's to sell the tabloid at its 1,000 fast food restaurants in Germany. The cooperation still goes on, often enough by advertising the restaurant chain in "news" articles. Like The Sun, young women in skimpy clothes—called "page 3 girls" in the United Kingdom—appeared on Bild's page one below the fold as Seite-eins-Mädchen or "Page One Girls". On 9 March 2012 Bild announced the elimination of the "Page One Girls", instead moving its fleshy photos to its inside pages.[15]

Despite being often recognised as a right-wing publication, in January 2015 Bild began a petition against PEGIDA, an anti-Islamisation protest group.[16]

Its motto, prominently displayed below the logo, is unabhängig, überparteilich ("independent, nonpartisan"). Another slogan used prominently in advertising is Bild dir deine Meinung!, which translates as "Form your own opinion!" (by reading Bild), a pun based on the fact that in German, Bild is a homophone of the imperative form of the verb German: bilden (English: to form, to build, to educate) and the noun German: Bild, (English: picture, image).

Foreign locations exist in Spain in Madrid, Palma de Mallorca, and Las Palmas. In Italy in Milan, in Greece in Athens and in Antalya, Turkey. The foreign locations cater mostly for German tourists and expatriates.

It is argued Bild's thirst for sensationalism results in the terrorizing of prominent celebrities and stories are frequently based on the most dubious evidence. The journalistic standards of Bild, or the lack thereof, are the subject of frequent criticism by German intellectuals and media observers.