From Infogalactic: the planetary knowledge core
Jump to: navigation, search
This article is about the physical energy derived biological sources. For the idea that all living things contain a "bioenergy" of a spiritual nature, see Energy (esotericism).
File:STM Stirling Generator set.jpg
A Stirling engine capable of producing electricity from biomass combustion heat

Bioenergy is renewable energy made available from materials derived from biological sources. Biomass is any organic material which has stored sunlight in the form of chemical energy. As a fuel it may include wood, wood waste, straw, manure, sugarcane, and many other byproducts from a variety of agricultural processes. By 2010, there was 35 GW (47,000,000 hp) of globally installed bioenergy capacity for electricity generation, of which 7 GW (9,400,000 hp) was in the United States.[1]

In its most narrow sense it is a synonym to biofuel, which is fuel derived from biological sources. In its broader sense it includes biomass, the biological material used as a biofuel, as well as the social, economic, scientific and technical fields associated with using biological sources for energy. This is a common misconception, as bioenergy is the energy extracted from the biomass, as the biomass is the fuel and the bioenergy is the energy contained in the fuel[2]

There is a slight tendency for the word bioenergy to be favoured in Europe compared with biofuel in America.[citation needed] 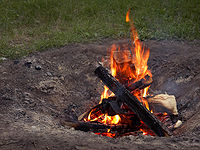 Simple use of biomass fuel (Combustion of wood for heat).

One of the advantages of biomass fuel is that it is often a by-product, residue or waste-product of other processes, such as farming, animal husbandry and forestry.[1] In theory this means there is no competition between fuel and food production, although this is not always the case.[1] Land use, existing biomass industries and relevant conversion technologies must be considered when evaluating suitability of developing biomass as feedstock for energy.[3]

Biomass is the material derived from recently living organisms, which includes plants, animals and their byproducts.[4] Manure, garden waste and crop residues are all sources of biomass. It is a renewable energy source based on the carbon cycle, unlike other natural resources such as petroleum, coal, and nuclear fuels. Another source includes Animal waste, which is a persistent and unavoidable pollutant produced primarily by the animals housed in industrial-sized farms.

There are also agricultural products specifically being grown for biofuel production. These include corn, and soybeans and to some extent willow and switchgrass on a pre-commercial research level, primarily in the United States; rapeseed, wheat, sugar beet, and willow (15,000 ha or 37,000 acres in Sweden) primarily in Europe; sugarcane in Brazil; palm oil and miscanthus[5] in Southeast Asia; sorghum and cassava in China; and jatropha in India. Hemp has also been proven to work as a biofuel. Biodegradable outputs from industry, agriculture, forestry and households can be used for biofuel production, using e.g. anaerobic digestion to produce biogas, gasification to produce syngas or by direct combustion. Examples of biodegradable wastes include straw, timber, manure, rice husks, sewage, and food waste. The use of biomass fuels can therefore contribute to waste management as well as fuel security and help to prevent or slow down climate change, although alone they are not a comprehensive solution to these problems.

Biomass can be converted to other usable forms of energy like methane gas or transportation fuels like ethanol and biodiesel. Rotting garbage, and agricultural and human waste, all release methane gas—also called "landfill gas" or "biogas." Crops, such as corn and sugar cane, can be fermented to produce the transportation fuel, ethanol. Biodiesel, another transportation fuel, can be produced from left-over food products like vegetable oils and animal fats. Also, Biomass to liquids (BTLs) and cellulosic ethanol are still under research.

A new bioenergy sewage treatment process aimed at developing countries is now on the horizon; the Omni Processor is a self-sustaining process which uses the sewerage solids as fuel to convert sewage waste water into drinking water and electrical energy.[6][7][8]

The biomass used for electricity production ranges by region.[1] Forest byproducts, such as wood residues, are popular in the United States.[1] Agricultural waste is common in Mauritius (sugar cane residue) and Southeast Asia (rice husks).[1] Animal husbandry residues, such as poultry litter, is popular in the UK.[1]

Electricity from sugarcane bagasse in Brazil

Sucrose accounts for little more than 30% of the chemical energy stored in the mature plant; 35% is in the leaves and stem tips, which are left in the fields during harvest, and 35% are in the fibrous material (bagasse) left over from pressing.

The production process of sugar and ethanol in Brazil takes full advantage of the energy stored in sugarcane. Part of the bagasse is currently burned at the mill to provide heat for distillation and electricity to run the machinery. This allows ethanol plants to be energetically self-sufficient and even sell surplus electricity to utilities; current production is 600 MW (800,000 hp) for self-use and 100 MW (130,000 hp) for sale. This secondary activity is expected to boom now that utilities have been induced to pay "fair price "(about US$10/GJ or US$0.036/kWh) for 10 year contracts. This is approximately half of what the World Bank considers the reference price for investing in similar projects (see below). The energy is especially valuable to utilities because it is produced mainly in the dry season when hydroelectric dams are running low. Estimates of potential power generation from bagasse range from 1,000 to 9,000 MW (1,300,000 to 12,100,000 hp), depending on technology. Higher estimates assume gasification of biomass, replacement of current low-pressure steam boilers and turbines by high-pressure ones, and use of harvest trash currently left behind in the fields. For comparison, Brazil's Angra I nuclear plant generates 657 MW (881,000 hp).

Presently, it is economically viable to extract about 288 MJ of electricity from the residues of one tonne of sugarcane, of which about 180 MJ are used in the plant itself. Thus a medium-size distillery processing 1,000,000 tonnes (980,000 long tons; 1,100,000 short tons) of sugarcane per year could sell about 5 MW (6,700 hp) of surplus electricity. At current prices, it would earn US$18 million from sugar and ethanol sales, and about US$1 million from surplus electricity sales. With advanced boiler and turbine technology, the electricity yield could be increased to 648 MJ per tonne of sugarcane, but current electricity prices do not justify the necessary investment. (According to one report, the World Bank would only finance investments in bagasse power generation if the price were at least US$19/GJ or US$0.068/kWh.)

Bagasse burning is environmentally friendly compared to other fuels like oil and coal. Its ash content is only 2.5% (against 30–50% of coal), and it contains very little sulfur. Since it burns at relatively low temperatures, it produces little nitrous oxides. Moreover, bagasse is being sold for use as a fuel (replacing heavy fuel oil) in various industries, including citrus juice concentrate, vegetable oil, ceramics, and tyre recycling. The state of São Paulo alone used 2,000,000 tonnes (1,970,000 long tons; 2,200,000 short tons), saving about US$35 million in fuel oil imports.

Researchers working with cellulosic ethanol are trying to make the extraction of ethanol from sugarcane bagasse and other plants viable on an industrial scale.

Another form of bioenergy can be attained from microbial fuel cells, in which chemical energy stored in wastewater or soil is converted directly into electrical energy via the metabolic processes of electrogenic micro-organisms. The power generation capability of this technology has not been economical to date, however, and this technology has found more utility for chemical treatment processes [9] and student education.[10]

Some forms of forest bioenergy have recently come under fire from a number of environmental organizations, including Greenpeace and the Natural Resources Defense Council, for the harmful impacts they can have on forests and the climate. Greenpeace recently released a report entitled Fuelling a BioMess which outlines their concerns around forest bioenergy. Because any part of the tree can be burned, the harvesting of trees for energy production encourages Whole-Tree Harvesting, which removes more nutrients and soil cover than regular harvesting, and can be harmful to the long-term health of the forest. In some jurisdictions, forest biomass is increasingly consisting of elements essential to functioning forest ecosystems, including standing trees, naturally disturbed forests and remains of traditional logging operations that were previously left in the forest. Environmental groups also cite recent scientific research which has found that it can take many decades for the carbon released by burning biomass to be recaptured by regrowing trees, and even longer in low productivity areas; furthermore, logging operations may disturb forest soils and cause them to release stored carbon. In light of the pressing need to reduce greenhouse gas emissions in the short term in order to mitigate the effects of climate change, a number of environmental groups are opposing the large-scale use of forest biomass in energy production.[11][12]