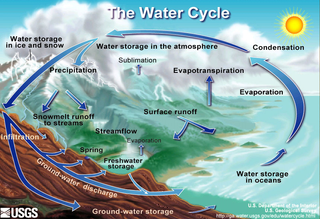 A commonly cited example is the water cycle.

In Earth science, a biogeochemical cycle or substance turnover or cycling of substances is a pathway by which a chemical substance moves through both biotic (biosphere) and abiotic (lithosphere, atmosphere, and hydrosphere) compartments of Earth. A cycle is a series of change which comes back to the starting point and which can be repeated.[1][2] Water, for example, is always recycled through the water cycle, as shown in the diagram. The water undergoes evaporation, condensation, and precipitation, falling back to Earth. Elements, chemical compounds, and other forms of matter are passed from one organism to another and from one part of the biosphere to another through biogeochemical cycles.[1][2]'

The term "biogeochemical" tells us that biological, geological and chemical factors are all involved. The circulation of chemical nutrients like carbon, oxygen, nitrogen, phosphorus, calcium, and water etc. through the biological and physical world are known as biogeochemical cycles. In effect, the element is recycled, although in some cycles there may be places (called reservoirs) where the element is accumulated or held for a long period of time (such as an ocean or lake for water).[1][2]

The most well-known and important biogeochemical cycles, for example, include

Biogeochemical cycles always involve hot equilibrium states: a balance in the cycling of the element between compartments. However, overall balance may involve compartments distributed on a global scale.

As biogeochemical cycles describe the movements of substances on the entire globe, the study of these is inherently multidisciplinary. The carbon cycle may be related to research in ecology and atmospheric sciences.[4] Biochemical dynamics would also be related to the fields of geology and pedology (soil study).[5]