About 99% of mammals' mass are the elements carbon, nitrogen, calcium, sodium, chlorine, potassium, hydrogen, phosphorus, oxygen and sulfur.[2] The organic compounds (proteins, lipids and carbohydrates) contain the majority of the carbon and nitrogen and most of the oxygen and hydrogen is present as water.[2] The entire collection of metal-containing biomolecules in a cell is called the metallome.

Paul Ehrlich used organoarsenic (“arsenicals”) for the treatment of syphilis, demonstrating the relevance of metals, or at least metalloids, to medicine, that blossomed with Rosenberg’s discovery of the anti-cancer activity of cisplatin (cis-PtCl2(NH3)2). The first protein ever crystallized (see James B. Sumner) was urease, later shown to contain nickel at its active site. Vitamin B12, the cure for pernicious anemia was shown crystallographically by Dorothy Crowfoot Hodgkin to consist of a cobalt in a corrin macrocycle. The Watson-Crick structure for DNA demonstrated the key structural role played by phosphate-containing polymers.

Several distinct systems are of identifiable in bioinorganic chemistry. Major areas include:

This topic covers a diverse collection of ion channels, ion pumps (e.g. NaKATPase), vacuoles, siderophores, and other proteins and small molecules which control the concentration of metal ions in the cells. One issue is that many metals that are metabolically required are not readily available owing to solubility or scarcity. Organisms have developed a number of strategies for collecting such elements and transporting them.

Many reactions in life sciences involve water and metal ions are often at the catalytic centers (active sites) for these enzymes, i.e. these are metalloproteins. Often the reacting water is a ligand (see metal aquo complex). Examples of hydrolase enzymes are carbonic anhydrase, metallophosphatases, and metalloproteinases. Bioinorganic chemists seek to understand and replicate the functi on of these metalloproteins.

Aerobic life make extensive use of metals such as iron, copper, and manganese. Heme is utilized by red blood cells in the form of hemoglobin for oxygen transport and is perhaps the most recognized metal system in biology. Other oxygen transport systems include myoglobin, hemocyanin, and hemerythrin. Oxidases and oxygenases are metal systems found throughout nature that take advantage of oxygen to carry out important reactions such as energy generation in cytochrome c oxidase or small molecule oxidation in cytochrome P450 oxidases or methane monooxygenase. Some metalloproteins are designed to protect a biological system from the potentially harmful effects of oxygen and other reactive oxygen-containing molecules such as hydrogen peroxide. These systems include peroxidases, catalases, and superoxide dismutases. A complementary metalloprotein to those that react with oxygen is the oxygen evolving complex present in plants. This system is part of the complex protein machinery that produces oxygen as plants perform photosynthesis. 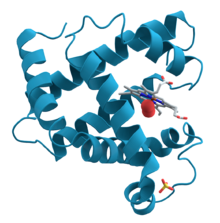 Myoglobin is a prominent subject in bioinorganic chemistry, with particular attention to the iron-heme complex that is anchored to the protein. 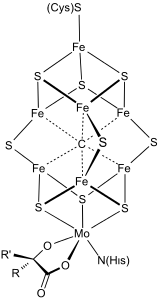 Structure of FeMoco, the catalytic center of nitrogenase.

A number of drugs contain metals. This theme relies on the study of the design and mechanism of action of metal-containing pharmaceuticals, and compounds that interact with endogenous metal ions in enzyme active sites. The most widely used anti-cancer drug is cisplatin. MRI contrast agent commonly contain gadolinium. Lithium carbonate has been used to treat the manic phase of bipolar disorder. Gold antiarthritic drugs, e.g. auranofin have been commerciallized. Carbon monoxide-releasing molecules are metal complexes have been developed to suppress inflammation by releasing small amounts of carbon monoxide. The cardiovascular and neuronal importance of nitric oxide has been examined, including the enzyme nitric oxide synthase. (See also: nitrogen assimilation.)

Biomineralization is the process by which living organisms produce minerals, often to harden or stiffen existing tissues. Such tissues are called mineralized tissues.[4][5][6] Examples include silicates in algae and diatoms, carbonates in invertebrates, and calcium phosphates and carbonates in vertebrates.Other examples include copper, iron and gold deposits involving bacteria. Biologically-formed minerals often have special uses such as magnetic sensors in magnetotactic bacteria (Fe3O4), gravity sensing devices (CaCO3, CaSO4, BaSO4) and iron storage and mobilization (Fe2O3•H2O in the protein ferritin). Because extracellular[7] iron is strongly involved in inducing calcification,[8][9] its control is essential in developing shells; the protein ferritin plays an important role in controlling the distribution of iron.[10]

Types of inorganic elements in biology 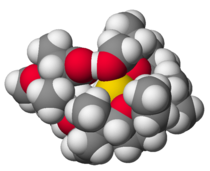 Like many antibiotics, monensin-A is an ionophore that tighlty bind Na+ (shown in yellow).[11]

The abundant inorganic elements act as ionic electrolytes. The most important ions are sodium, potassium, calcium, magnesium, chloride, phosphate, and the organic ion bicarbonate. The maintenance of precise gradients across cell membranes maintains osmotic pressure and pH.[12] Ions are also critical for nerves and muscles, as action potentials in these tissues are produced by the exchange of electrolytes between the extracellular fluid and the cytosol.[13] Electrolytes enter and leave cells through proteins in the cell membrane called ion channels. For example, muscle contraction depends upon the movement of calcium, sodium and potassium through ion channels in the cell membrane and T-tubules.[14]

The transition metals are usually present as trace elements in organisms, with zinc and iron being most abundant.[15][16][17] These metals are used in some proteins as cofactors and are essential for the activity of enzymes such as catalase and oxygen-carrier proteins such as hemoglobin.[18] These cofactors are bound tightly to a specific protein; although enzyme cofactors can be modified during catalysis, cofactors always return to their original state after catalysis has taken place. The metal micronutrients are taken up into organisms by specific transporters and bound to storage proteins such as ferritin or metallothionein when not being used.[19][20] Cobalt is essential for the functioning of vitamin B12.[21]

Many other elements aside from metals are bio-active. Sulfur and phosphorus are required for all life. Phosphorus almost exclusively exists as phosphate and its various esters. Sulfur exists in a variety of oxidation states, ranging from sulfate (SO42−) down to sulfide (S2−). Selenium is a trace element involved in proteins that are antioxidants. Cadmium is important because of its toxicity.[22]