A birch is a thin-leaved deciduous hardwood tree of the genus Betula (/ˈbɛtjʊlə/),[2] in the family Betulaceae, which also includes alders, hazels, and hornbeams. It is closely related to the beech-oak family Fagaceae. The genus Betula contains 30 to 60 known taxa of which 11 are on the IUCN 2011 Red List of Threatened Species. They are a typically rather short-lived pioneer species widespread in the Northern Hemisphere, particularly in northern areas of temperate climates and in boreal climates.[3] 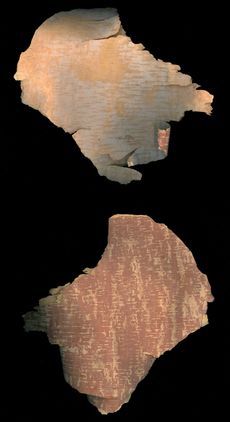 The front and rear sides of a piece of birch bark

Birch species are generally small to medium-sized trees or shrubs, mostly of northern temperate and boreal climates. The simple leaves are alternate, singly or doubly serrate, feather-veined, petiolate and stipulate. They often appear in pairs, but these pairs are really borne on spur-like, two-leaved, lateral branchlets.[4] The fruit is a small samara, although the wings may be obscure in some species. They differ from the alders (Alnus, other genus in the family) in that the female catkins are not woody and disintegrate at maturity, falling apart to release the seeds, unlike the woody, cone-like female alder catkins.

The bark of all birches is characteristically marked with long, horizontal lenticels, and often separates into thin, papery plates, especially upon the paper birch. Distinctive colors give the common names gray, white, black, silver and yellow birch to different species.

The buds, forming early and full-grown by midsummer, are all lateral, without a terminal bud forming; the branch is prolonged by the upper lateral bud. The wood of all the species is close-grained with a satiny texture and capable of taking a fine polish; its fuel value is fair.

The flowers are monoecious, opening with or before the leaves. Once fully grown, these leaves are usually 3–6 millimetres (1⁄8–1⁄4 in) long on three-flowered clusters in the axils of the scales of drooping or erect catkins or aments. Staminate catkins are pendulous, clustered, or solitary in the axils of the last leaves of the branch of the year or near the ends of the short lateral branchlets of the year. They form in early autumn and remain rigid during the winter. The scales of the mature staminate catkins are broadly ovate, rounded, yellow or orange color below the middle, and dark chestnut brown at apex. Each scale bears two bractlets and three sterile flowers, each flower consisting of a sessile, membranous, usually two-lobed, calyx. Each calyx bears four short filaments with one-celled anthers or strictly, two filaments divided into two branches, each bearing a half-anther. Anther cells open longitudinally. The pistillate segments are erect or pendulous, and solitary, terminal on the two-leaved lateral spur-like branchlets of the year. The pistillate scales are oblong-ovate, three-lobed, pale yellow-green often tinged with red, becoming brown at maturity. These scales bear two or three fertile flowers, each flower consisting of a naked ovary. The ovary is compressed, two-celled, and crowned with two slender styles; the ovule is solitary. Each scale bears a single small, winged nut that is oval, with two persistent stigmas at the apex.

Birches native to Europe and Asia include

Note: many American texts have B. pendula and B. pubescens confused, though they are distinct species with different chromosome numbers.

Birches native to North America include

The generic name betula is from Latin, which is a diminutive borrowed from Gaulish betua (cf. Old Irish bethe, Welsh bedw). 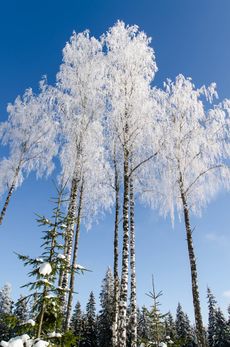 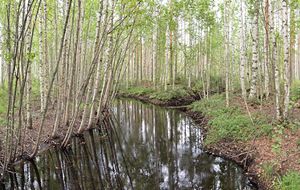 Birch trees by a river in Hankasalmi, Finland 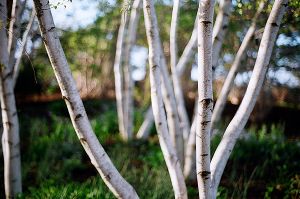 A stand of birch trees 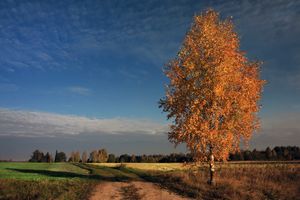 A birch tree in autumn

Birches often form even-aged stands on light, well-drained, particularly acidic soils. They are regarded as pioneer species, rapidly colonizing open ground especially in secondary successional sequences following a disturbance or fire. Birches are early tree species to become established in primary successions, and can become a threat to heathland if the seedlings and saplings are not suppressed by grazing or periodic burning. Birches are generally lowland species, but some species, such as Betula nana, have a montane distribution. In the British Isles, there is some difference between the environments of Betula pendula and Betula pubescens, and some hybridization, though both are "opportunists in steady-state woodland systems". Mycorrhizal fungi, including sheathing (ecto)mycorrhizas, are found in some cases to be beneficial to tree growth.[6]

A large number of lepidopteran insects feed on birch foliage. 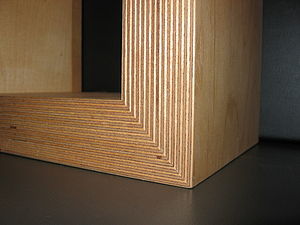 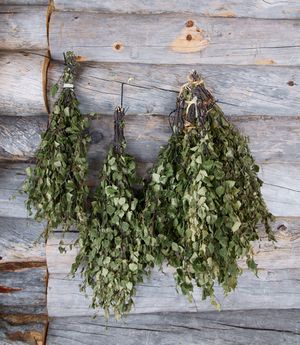 Because of the hardness of birch, it is easier to shape it with power tools; it is quite difficult to work it with hand tools.[7]

White-barked birches in particular are cultivated as ornamental trees, largely for their appearance in winter. The Himalayan birch, Betula utilis, especially the variety or subspecies jacquemontii, is among the most widely planted for this purpose. It has been cultivated since the 1870s, and many cultivars are available, including 'Doorenbos', 'Grayswood Ghost' and 'Silver Shadow'; 'Knightshayes' has a slightly weeping habit. Other species with ornamental white bark include Betula ermanii, Betula papyrifera, Betula pendula and Betula raddeana.[11]

In the European Union, a prescription gel containing birch bark extract (commercial name Episalvan, betulae cortex dry extract (5-10 : 1); extraction solvent: n-heptane 95% (w/w)) was approved in 2016 for the topical treatment of minor skin wounds in adults.[12] Although its mechanism of action in helping to heal injured skin is not fully understood, birch bark extract appears to stimulate the growth of keratinocytes which then fill the wound.[12][13]

Preliminary research indicates that the phytochemicals, betulin and possibly other triterpenes, are active in Episalvan gel and wound healing properties of birch bark.[13]

Over centuries, birch bark was used in traditional medicine practices by North American indigenous people for treating superficial wounds by applying bark directly to the skin.[13] Splints made with birch bark were used as casts for broken limbs in the 16th century.[14] 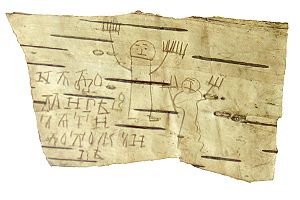 A birch bark inscription excavated from Novgorod, circa 1240–1260

Wood pulp made from birch gives relatively long and slender fibres for a hardwood. The thin walls cause the fibre to collapse upon drying, giving a paper with low bulk and low opacity. The birch fibres are, however, easily fibrillated and give about 75% of the tensile strength of softwood.[clarification needed][15] The low opacity makes it suitable for making glassine.

In India, the birch (Sanskrit: भुर्ज, bhurja) holds great historical significance in the culture of North India, where the thin bark coming off in winter was extensively used as writing paper. Birch paper (Sanskrit: भुर्ज पत्र, bhurja patra) is exceptionally durable and was the material used for many ancient Indian texts.[16][17] The Roman period Vindolanda tablets also use birch as a material on which to write and birch bark was used widely in ancient Russia as notepaper (beresta) and for decorative purposes and even making footwear (lapti) and baskets.[citation needed]

Baltic birch is among the most sought-after wood in the manufacture of speaker cabinets. Birch has a natural resonance that peaks in the high and low frequencies, which are also the hardest for speakers to reproduce.[citation needed] This resonance compensates for the roll-off of low and high frequencies in the speakers, and evens the tone. Birch is known for having "natural EQ".[citation needed]

Drums are often made from birch. Prior to the 1970s, it was one of the most popular drum woods. Because of the need for greater volume and midrange clarity, drums were made almost entirely from maple until recently,[clarification needed] when advances in live sound reinforcement and drum microphones have allowed the use of birch in high-volume situations. Birch drums have a natural boost in the high and low frequencies, which allows the drums to sound fuller.[citation needed]

Birch wood is sometimes used as a tonewood for semiacoustic and acoustic guitar bodies, and occasionally for solid-body guitar bodies. It is also a common material used in mallets for keyboard percussion.[citation needed]

Birches have spiritual importance in several religions, both modern and historical. In Celtic cultures, the birch symbolises growth, renewal, stability, initiation, and adaptability because it is highly adaptive and able to sustain harsh conditions with casual indifference. Proof of this adaptability is seen in its easy and eager ability to repopulate areas damaged by forest fires or clearings. Birches are also associated with Tír na nÓg, the land of the dead and the Sidhe, in Gaelic folklore, and as such frequently appear in Scottish, Irish, and English folksongs and ballads in association with death, or fairies, or returning from the grave. The leaves of the silver birch tree are used in the festival of St George, held in Novosej and other villages in Albania.[18]

The birch is New Hampshire's state tree and the national tree of Finland and Russia. The yellow birch is the official tree of the province of Quebec (Canada). The birch is a very important element in Russian culture and represents the grace, strength, tenderness and natural beauty of Russian women as well as the closeness to nature of the Russians.[19] It's associated with marriage and love.[20] There are numerous folkloric Russian songs in which the birch tree occurs. The Ornäs birch is the national tree of Sweden. The Czech word for the month of March, Březen, is derived from the Czech word bříza meaning birch, as birch trees flower in March under local conditions. The silver birch tree is of special importance to the Swedish city of Umeå. In 1888, the Umeå city fire spread all over the city and nearly burnt it down to the ground, but some birches, supposedly, halted the spread of the fire. To protect the city against future fires, wide avenues were created, and these were lined with silver birch trees all over the city. Umeå later adopted the unofficial name of "City of the Birches (Björkarnas stad)". Also, the ice hockey team of Umeå is called Björklöven, translated to English "The Birch Leaves".[citation needed]

"Swinging" birch trees was a common game for American children in the nineteenth century. American poet Lucy Larcom's "Swinging on a Birch Tree" celebrates the game.[21] The poem inspired Robert Frost, who pays homage to the act of climbing birch trees in his more famous poem, "Birches".[22] Frost once told "it was almost sacrilegious climbing a birch tree till it bent, till it gave and swooped to the ground, but that's what boys did in those days".[23]