It offers many Master's and Bachelor's degree programmes that can be studied either part-time or full-time, though nearly all teaching is in the evening. It also admits full-time (as well as part-time) students for PhDs. Its staff members have excellent research reputations in subjects such as English, Economics, Statistics, History, History of Art, Philosophy, Psychology, Spanish and Science. It also offers many continuing education courses leading to certificates and diplomas, foundation degrees as well as other short courses.

Established in 1823, Birkbeck has a long history of offering the highest quality university education. It is a multi-faculty institution offering over 200 full-time undergraduate and postgraduate programmes.[5] Research at Birkbeck in 11 subject areas is rated as ‘internationally excellent’ and ‘world leading’ while over 90 percent of Birkbeck academics are research-active and many are renowned world-class experts in their fields. The Queen’s Anniversary Prize for excellence in higher education research was awarded in 2006. This research was undertaken by Birkbeck’s Centre for Brain and Cognitive Development – a leading centre for neuropsychological research.[5] 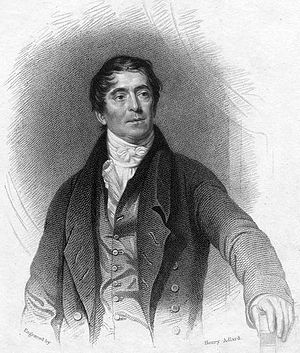 In 1823, George Birkbeck, a physician and graduate of the University of Edinburgh Medical School and an early pioneer of adult education, founded the then "London Mechanics' Institute" at a meeting at the Crown and Anchor Tavern on the Strand. Over two thousand people attended.[6] However the idea was not universally popular and some accused Birkbeck of "scattering the seeds of evil."[7]

Two years later, the institute moved to the Southampton Buildings on Chancery Lane. In 1830, the first female students were admitted. In 1858, changes to the University of London's structure resulting in an opening up of access to the examinations for its degree. The Institute became the main provider of part-time university education.[6]

The Institute changed its name to the "Birkbeck Literary and Scientific Institution" in 1866 and in 1885 it moved to the Breams Building, on Fetter Lane, where it would remain for the next sixty-seven years.[6]

The early twentieth century saw further developments, with Birkbeck Students' Union being established in 1904, and in 1907 the institute's name changed once more, to "Birkbeck College". In 1913, a review of the University of London (which had been restructured in 1900) successfully recommended that Birkbeck become a constituent college, although the outbreak of the First World War delayed this until 1920. The Royal Charter for the college was granted in 1926.[6] The college's first female professor, Dame Helen Gwynne-Vaughan began teaching botany in 1921.[7] Among the other distinguished faculty in the of the inter-war years were Nikolaus Pevsner, J. D. Bernal and Cyril Joad.

During the Second World War, Birkbeck was the only central University of London college not to relocate out of the capital. In 1941, the library suffered a direct hit during The Blitz but teaching continued. During the war the College organised lunch time extramural lectures for the public given by, among others, Joad, Pevsner and Harold Nicolson.

In 1952, the college moved to its present location in Malet Street.[6] 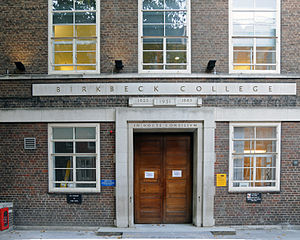 The former main entrance of Birkbeck College; the new entrance is on the other side of this building.

In 2002, the college was renamed, becoming simply Birkbeck, University of London; the term Birkbeck College is still in use, and survives on the façade of the main building itself. The following year, a major redevelopment of the Malet Street building was opened.[6]

It was announced in 2006 that Birkbeck had been granted £5 million by the Higher Education Funding Council for England to expand its provision into east London, working with the University of East London.[8] The partnership was formally launched on November 21, 2006 and is called Birkbeck Stratford.[9]

The School of Continuing Education

The School of Continuing Education (aka the Faculty of Lifelong Learning), which specialised in extramural studies did not become an integral part of Birkbeck until 1988 but has a long separate history. It has now been integrated into the main College. 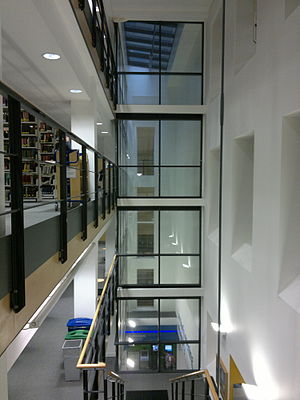 The interior of the new library.

Birkbeck's main building is located between Malet Street and Woburn Square in Bloomsbury, with a number of buildings on nearby streets. The School of Arts, including the Department of English & Humanities, is housed in Virginia Woolf's former Gordon Square residence in Bloomsbury. Other notable former residents of this house include Vanessa Bell, John Maynard Keynes and Lydia Lopokova.

Many Birkbeck classes are taught at other locations across the Bloomsbury area, due to a combination of Birkbeck's widening participation strategy to make higher education accessible and also because nearly all classes on one day are taught at the same time, resulting in heavy competition for limited space.

In 2006, it was announced that Birkbeck would be expanding into east London, in conjunction with the University of East London. The project is known as Birkbeck Stratford.[8] The new campus officially opened in November 2013.[11] 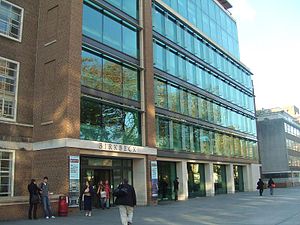 Part of the main Birkbeck campus in Bloomsbury, showing the main entrance.

While part-time undergraduate teaching remains the focus and mandate of Birkbeck, the college has recently begun to focus on research in the arts and humanities.[citation needed]

The Birkbeck Institute for the Humanities[12] was established in 2004, with the renowned but controversial Slovenian philosopher Slavoj Žižek appointed as International Director. According to its website, the Institute aims to, among other things, "engage with important public issues of our time through a series of open debates, lectures, seminars and conferences" and "foster and promote a climate of interdisciplinary research and collaboration among academics and researchers". The launch of the Institute wasn't without controversy, provoking an article in The Observer newspaper titled "What have intellectuals ever done for the world?"[13] which criticised the ostensible irrelevance and elitism of contemporary public intellectuals. The current director of the institute is Costas Douzinas.[14] 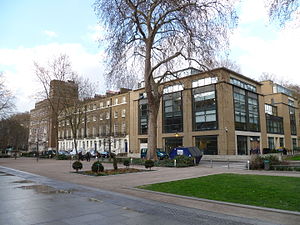 2004 also saw Birkbeck enter into a research and teaching collaboration with the Institute of Education, jointly founding the London Knowledge Lab. This interdisciplinary research institute brings together social scientists and computer scientists to address research questions about technology and learning.[15]

Meanwhile, the London Consortium graduate school — a collaboration between Birkbeck, the Tate Galleries, the Institute of Contemporary Arts, the Architectural Association, and, until 1999, the British Film Institute – has been running since the mid-1990s, offering masters and doctoral degrees in the interdisciplinary humanities and cultural studies, resourced and jointly taught by all the participating institutions. Its permanent and adjunct faculty include figures such as Tom McCarthy, Colin MacCabe, Laura Mulvey, Steven Connor, Marina Warner, Juliet Mitchell, Stuart Hall, Roger Scruton, Salman Rushdie, Tilda Swinton as well as Slavoj Žižek. Its current chair is Anthony Julius.

Science research at Birkbeck has a notable tradition. Physicist David Bohm who made notable contributions to the theory of Quantum mechanics was professor of Theoretical Physics from 1961–87 and Nobel Laureates Aaron Klug and Derek Barton both worked in the faculty of crystallography. Birkbeck is part of the Institute of Structural Molecular Biology, which includes the Bloomsbury Centre for Structural biology, established in 1998. This is a collaborative venture between Birkbeck College and University College London and is a leading academic centre for translating gene sequences and determining protein structure and function. It also includes the Bloomsbury Centre for Bioinformatics, a collaborative venture also between Birkbeck College and University College London for research into Bioinformatics, Genomics, Systems Biology, GRID computing and Text mining.

Birkbeck is often not included in rankings of British universities, since these are usually based on the statistics for full-time undergraduates. But still, Birkbeck ranked 13th in The Guardian's 2001 Research Assessment Exercise league table and 26th in Times Higher Education's equivalent table. In the 2008 RAE results, Birkbeck ranked in the top 25% of UK multi-faculty Higher Education Institutions. The RAE rated the quality of research in a range of subjects at 159 Higher Education Institutions in the UK. Birkbeck submissions from Earth Sciences, Psychology, History, Classics and Archaeology and History of Art, Film and Visual Media were rated in the top five nationally.

In 2010, Birkbeck was shortlisted for the prestigious Times Higher Education University of the Year Award.[22]

Birkbeck's School of English and Humanities was rated 5* in the 2001 Research Assessment Exercise, as were the School of History, Classics and Archaeology, the School of Crystallography, and the section for Spanish and Latin American studies within the School of Languages, Linguistics and Culture, and the Dept. of Psychological Sciences in the School of Psychology—ranking these departments with, and in some cases above, Oxford and Cambridge University.

As Birkbeck primarily offers part-time courses, often in the evenings, student life is less centralised than in other universities. It does not offer its own halls of residence, for instance, though Birkbeck students do have access to the University of London's intercollegiate halls.

Birkbeck Students' Union offers a number of societies for students, as well as a football club that competes in the University of London league. It also provides student representation and support, a student magazine, a student shop and a bar. Birkbeck students also have access to the societies and clubs of the Student Central, whose building adjoins Birkbeck's Bloomsbury site.

The college arms include a lamp and an owl, symbolising the college's motto 'In nocte consilium' (translated as "study by night"). Because of this, the student magazine was called Lamp and Owl. Its name was changed in 2010 to 'Lampanelle', and after an 18-month hiatus returned in February 2012 with the name having reverted to The Lamp And Owl.

The college has entered teams in 'University Challenge' over the years, with varied results. In 1997, a team scored just 40 points – at that stage the lowest score since the series had been revived, though this has since been broken by New Hall, Cambridge, the University of Bradford and the University Challenge: The Professionals team of Members of Parliament.[23] 1998 saw a reversal of fortunes when Birkbeck reached the final, losing to Magdalen College, Oxford. In 2003, Birkbeck again reached the final, facing another team of mature students from Cranfield University. On this occasion, Birkbeck won.

In the past two decades Birkbeck, University of London has consistently done well in University Challenge, ranked among the best[24] since the TV series was revived with Jeremy Paxman.

Birkbeck's School of Law actively competes in national and international mooting competitions of simulated court proceedings. At the 2012 Inner Temple Inter-Varsity Moot Birkbeck went through to the quarter-finals, being selected as one of the final eight teams of the 32 UK Universities (64 teams) which competed for the prestigious Inner Temple award. In 2012 Birkbeck was entered in the prized University of Oxford-based Price Moot Competition and finished within the top 15 Law Schools in the competition. The competition draws Law Schools from universities all around the world and focuses on international law.

Template:Birkbeck, University of London Script error: The function "top" does not exist.